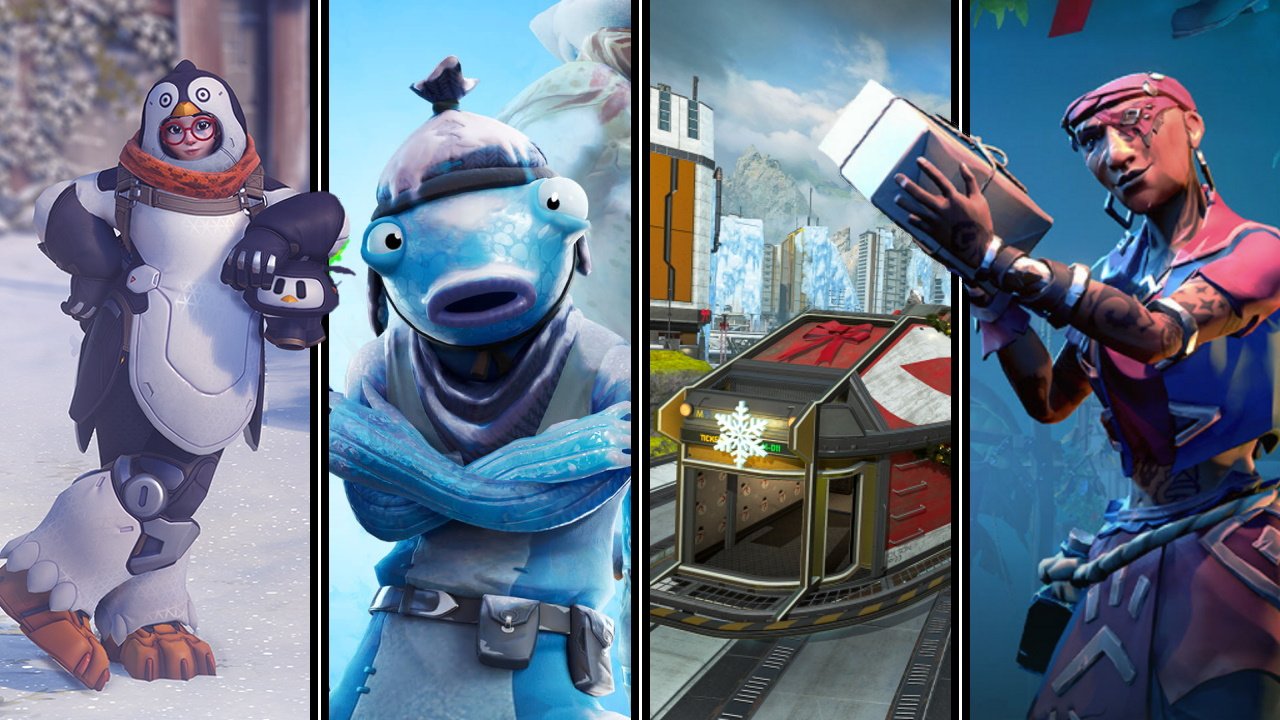 Holiday update haul: All the big holiday events in gaming

That shiver running down your spine can’t be blamed on spook season anymore, as we are well on our way into the frosty months of the gaming calendar. Fortunately, while we’re spending more time inside, we can at least enjoy the many festive gaming events which our favorite titles will be putting on in the late hours of the year. Collected below are all the big video game holiday events that we’ve heard of so far. Grab your coat, because things are getting snowy out there!

Holiday update haul: All the big holiday events in gaming

Among Us: Christmas hats

Among Us unlocks a variety of christmas-themed hats and outfits if you play the game in December, letting you equip santa hats, reindeer antlers and more. All the options will unlock for free so long as the calendar for the device you’re playing on registers that it’s during December. Once unlocked, the outfits will remain available forever.

Animal Crossing: New Horizons celebrates the winter season with Toy Day on December 24. In the run up to the day itself, players can roll snowballs to buiild up snowmen and receive winter-themed recipes. Pick up toys and offer them to your island pals on the day itself to give the gift of giving. And yes, you'll get pressies in return as well.

For 2021's Apex Legends holiday event, we haven't had any word of Holo-Day bash's return. Instead, the Winter Express is back during the current Raiders Collection event which runs December 7 to 21. The mode sees three teams attempting to take control of a train, with the last winner starting on the train as a defender. In this year's iteration, players all choose their loadouts in advance of the round start, allowing you to equip whatever gear you're in the mood for. If a Holo-Day bash is to return, expect it after December 21.

Chivalry is getting into the spirit of the holidays by updating its decorations for maps, weapon presets, and more until early January. They're not just for looks, either. Players can grab snowballs to toss at the opposition, swing a gift-wrapped anvil, or deliver a deadly thump with a Yule Log. There are also snowmen you can hack the limbs and heads off for fun, you meanie. The update also added a new Cathedral map to Brawl Mode, introduced the War Bow, and added more than 40 Armory Items.

Dead by Daylight: Season of Giving 2021

In the spirit of giving, Dead by Daylight is offering daily gifts to all players over the course of the holiday season. There's a full advent calendar of rewards to claim as shown above. All you need to do to claim the gifts on offer is log in each day. So whether you're planning to play or not, find some time to load up if you're after free resources for the blood web and store.

Destiny’s holiday event usually kicks off a little closer to Christmas day, so we’re not expecting news until next week. Typically festive activities involve dressing up silly and baking cookies to give to everyone in the tower. It’s a lovely time, really.

Fortnite's Winterfest 2021 celebrations have been revealed by developer Epic Games. The event of frosty fun takes place from December 16 and runs through January 6. Winterfest is offering 14 days of gifts for players, including the new Krisabelle and Polar Peely skins. Along with those you'll be able to grab two pickaxes, two wraps, a glider, a contrail, an emote, a loading screen, a spray, a banner, a lobby track, and an emoticon.

Sgt. Winter has returned to the island during Winterfest 2021. He's dishing out quests players can compete to gain XP. Complete severn and you'll score yourself the Snowmando Board Glider. Beat 10 and you can claim the Ffrosty Back Bling. For the duration of the event, classic winter items like Chiller Grenades and Snowball launchers have also been unvaulted.

During the runtime, you'll also be able to buy a Tom Holland Spider-Man skin and a Zendaya Mary Jane skin based on No Way Home from the game's store. With her Dune skin dropping earlier in the year, Zendaya now has two Fortnite skins to her name. Check out the other revealed skins and gifts in Epic's breakdown of the event.

Hunt: Showdown's winter event sees Solstice Tributes appear in each game. Destroying them, along with investigating clue, rifts, and looting hunter bodies will earn event points. Earn 10,000 and you can claim the the Winfield 1873 Swift ‘Mountain King,’ Cavalry Saber ‘Corvus,’ and Quad Derringer ‘Evergreen,’ along with a 'Spirit of Yule' firebomb.

Activision Blizzard is in the midst of an ongoing lawsuit alleging sexual harrassment incidents and a 'frat boy' work environment. As a result, news on updates for games like Overwatch has been understandably quiet. If Winter Wonderland is returning, it'll likely do so in the middle of the month, offering a selection of wintery skins like last year's penguin Mei. We'll also likely get the return of the Yeti Hunter mode which sees one Winston player trying to steal meat from a side of six Meis.

Pokémon Unite's winter update brings free rewards, new challenges, and a heavy coat of snow for the online arena. Daily log-in gives will be offered from December 24, and if you log in before December 31, you can claim the license for Tsareena for free. On December 20, the Unite license for Dragonite will also be made available. During the main event, special reward boxes with holiday-themed licenses, fashion items, and more will be available.

Players can also take part in the Illumination and Photo challenges. The former runs from December 15 to January 16, while the latter runs from December 24 to January 6. There's also a new 4v4 Quick Battle map called Snowball Battle. Anyone knocked out during the event will be turned into a snowman for a brief time. They can't move, but they can pose and relay information to their team. Finally, from January 1-3, all licenses will be temporarily made available to all players outside of Ranked matches.

Sea of Thieves: Festival of Giving

Sea of Thieves' holiday event returns in 2021, rewarding anywho who's willing to share their plunder. During the event, players earn Wreath of Winter items and claim both gold and Renown by having other crews hand in their loot. Gift treasure to other crews and they can hand it in on your behalf, earning you exclusive items as a reward. You can also snag a free Festival of Giving Event flag by talking to Larinna.

Valorant might take itself quite seriously in the competitive world, at winter, Riot lightens the mood. Last Valorant’s holiday event saw Snowball Fight mode introduced. This fresh take on the team deathmatch format saw players firing snowballs out of launchers in a race to 50 kills. In addition, power ups will appear in both sides’ spawns which offer boosts like increasing snowball size or rate of fire. The mode has returned in 2021 and will be sticking around until January 11.

Those are all the holiday events we know of so far. We're still waiting for concrete details on several of them, and we'll do out best to update this list once they're properly announced. Which are you looking forward to taking part in? Let us know down in the comments section.