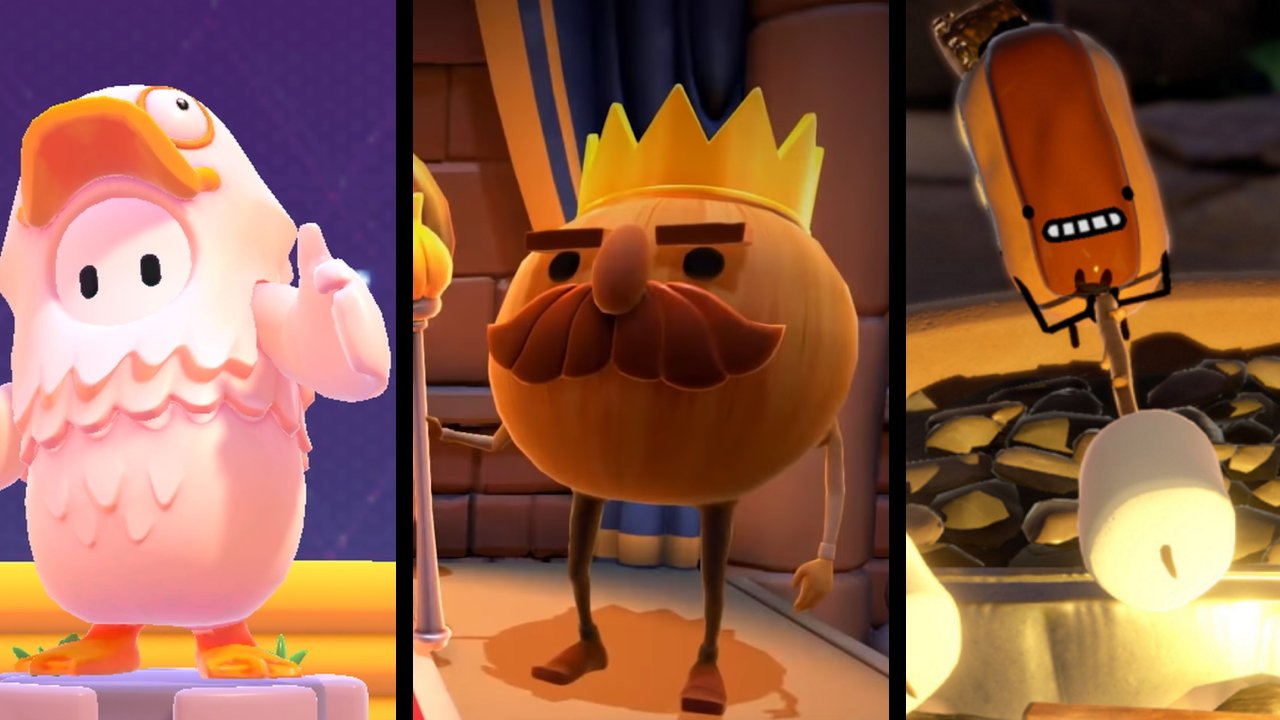 You're headed home for Christmas and the whole family will be there! Yes! Even your uncle who works at Nintendo! But then again, maybe you can’t this year, and are stuck looking at the prospect of roast dinner via Zoom call. Either way, at some point you're either going to run out of food to eat or you're going to get sick of the sight of food and then you'll need something else to occupy you before aunt Doris starts talking about how things used to be different back in the war, even though she was born in 1972 and has lived through the longest successive peacetime in history. Time to crack out some video games.

The best games to play with friends and family in person

Built from the same framework as Overcooked, this four-player co-operative title sees you tearing through a variety of houses, ripping out boxes, fridges, sofas, and everything else inside in a race to hurl them into your removals van. Did that say fragile? Who cares when you’re against the clock! Heavy items will need two or more players to shift them about, but you can also save time by hurling stuff out of windows or across swimming pools.

Moving Out is packed with physics-based hilarity and the simple script is pretty entertaining too. Even if you’re just partnering up with one other person, it’s still great fun and you’ll find you’ve got a lot more time to plan out the perfect – though no less destructive – path through each abode’s interior. If you’re stuck inside your own homes, Moving Out is the perfect opportunity to go wreck someone else’s.

Got a VR headset? Don’t mind risking it being bumped against a wall or, worse, drenched in sweat? Pistol Whip is the perfect followup for those who’ve sliced Beat Saber to death and back. In it, you’ll need to dodge bullets and gun down goons to the beat as you slide through what we can only describe as a dubstep fever dream.

The challenge ramps up quickly, so a single level of ducking, shifting, and aiming is enough to get you sweating hard. That means Pistol Whip is the perfect title to hotswap between your family members, giving enough time to recover from person to person. Inside the headset, you’ll feel as slick and smooth as John Wick. But outside? You’ll struggle not to giggle at your mum or dad bobbing to and fro and waving their arms about. Just make sure you bring a napkin or something to wipe it down between rounds.

This year saw Steve from Minecraft added to Super Smash Bros. Ultimate. That means you can, in the year 2020, have an eight-player battle in Nintendo’s brawler that features Sonic, Steve, Ryu, Banjo & Kazooie, Joker, the Dragon Quest Hero, Solid Snake, and Cloud Strife battling in a Castlevania level. And you wouldn’t even exhaust the third-party character options. The ridiculousness of that scenario aside, it shows that Smash is aiming to appeal to everyone.

At this point, Super Smash Bros. Ultimate has so many characters and franchises stuffed into it that at least one should appeal to each family member. Well, perhaps not your grandma, but she’ll likely refer to them all as “nice young persons” anyway, presumably while repeatedly spiking you off stage with “that fellow in the stylish dungarees.” Ultimate is a phenomenal game, mixing the best parts of competitive action with nonsensical items and stages. Two years on from its release, it remains the best way to settle family disputes in person.

If you’re growing tired of Mario Party, you might be wondering what else is out there for the minigame (and luck) loving gamers of the world. Available on the PS4, Xbox One, Nintendo Switch, and PC, Cake Bash is the perfect choice for fans of pastries, puns, and ridiculous chaos. While the minigame selection may be lacking compared to Mario’s outings, the games included are lathered in entertaining icing.

In a desperate race to score points, your little cupcakes will be tasked with efficiently coating donuts, dodging a hungry pigeon, perfectly toasting marshmallows, and more. It’s a silly, frivolous affair that can be played online but is best enjoyed within punching distance of your pals.

Unless your parents are secret esports pros, there likely aren’t many video games out there you can expect older family relations to school you in. 51 Worldwide Classics doesn’t just deliver one exception, it unloads an entire dump truck of them. This melange of old board games and toys will teach you how to play matches of more commonplace classics like Chess, and Backgammon, as well as other interesting options such as Shogi, Gomoku, Riichi Mahjong, and Hanafuda.

Each game is taught and played in a surprisingly satisfying manner, and if you get tired of losing rounds of Nine Men’s Morris to your grandpa, you can always swap to the silly fun of games like Slot Cards and Toy Curling. Best of all, if anyone else in your family owns a Switch, you can connect them together with only one game copy to create an expanded screen for many of the included games.

The best games to play with friends and family online

While great when enjoyed around the same screen, the Jackbox Party Packs are also some of the best games you can play with an online group. Hook up to a Zoom or Discord call and, provided the owning player can screen share, everyone can join in the fun and laughter with just their phones or a browser handy.

The latest edition, Jackbox Party Pack 7, is one of the best entries yet. As well as including the classic Quiplash, you’ll find brilliant new additions like drawing showdown Champed Up, and the presentation-based Talking Points. As with many Jackbox games, 7 is best enjoyed by a group of at least 5 or more, meaning you’d do well to get those distant relations, family partners, or wider friend groups involved tool.

Overcooked: All You Can Eat

Overcooked and its sequel remain some of the best couch co-op games available. But if you pick up the All You Can Eat edition on PS5 or Series X, you’ll also be able to enjoy the original game online for the first time. This bumper packed bundle includes both titles and all the DLC released for them, available in both online and offline co-op. That’s an awful lot of food to prepare, so you’d better enlist the help of some trusted friends or family members, wherever they are in the world.

A glistening color palette and achingly simple controls make Overcooked a great choice for co-op sessions with inexperienced gamers. Plus, messing up and setting fire to half the kitchen is pretty much an intended part of the game. There are also several Christmas-themed DLC packs, making this buffet well worth stuffing your face with during the holiday season. With added touch ups like 60fps support, Overcooked: All You Can Eat is a premium co-op gaming package whether you’re looking to play in-person or over the net.

Battle royale games are usually a little too stressful for social hangouts. And while Fall Guys will certainly have you shouting and at times swearing at the screen, that’s honestly where half of the fun is derived. You may rarely see your mates in the bouncing mob of 60 beans which start each run of this obstacle course gauntlet, but it remains a brilliant game to play as a group.

Reach the finish line early and you can either hang around to hug your friends as they catch you up, or cross over and cheer them on while spectating. As more of your are eliminated each round, the surviving players will build up a cheerleader squad of spectators, chanting support and laughing at each mishap. It’s a glorious bout of mayhem and each run is short enough that being eliminated early doesn’t lead to distraction. The Season 3 update brings a host of festive-themed levels and outfits to the game, which will really help you get in the spirit of things as you tumble through each course.

We might be video game lovers at heart, but visiting the family in the colder months of the year has always been associated with sitting down to enjoy a board game together. If you’re lacking that connection this year, digital board games won’t quite fill the same role, but can serve as a pretty solid substitute. We’ve rounded up a list of some of the best digital board games you can read by clicking here, so you know which ones are worth you and yours gathering around the virtual table for.

Those are our suggestions for the games to play with your family and friends both online and off this holiday season. Got any go-to games of your own? Let us know in the comments below. And most important of all, have a lovely end to the year.