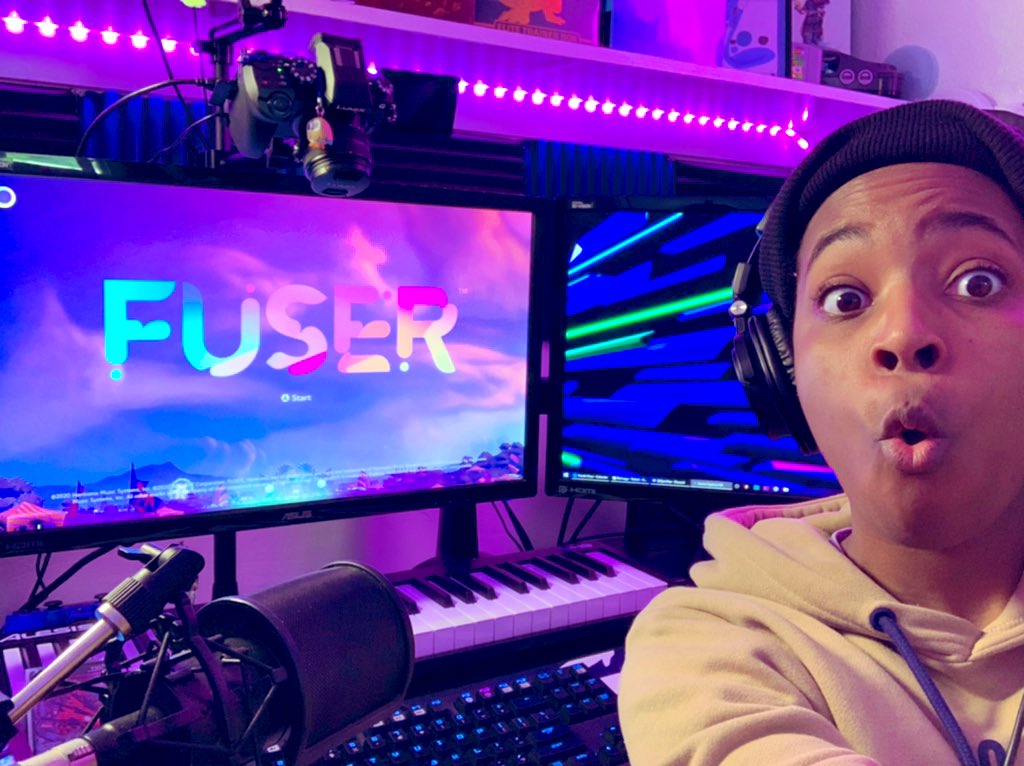 With the usual blended mix of gaming and education, Glitch's Crash Course used her deep soundbank of knowledge to show us the ins and outs of composing lo-fi music on a digital audio workstation (DAW), as well as the finer points of DJing with the new game from Harmonix.

As always, the most important first lesson of any Crash Course is to get hydrated. Water is life. Doesn't matter if it's for a marathon gaming session or your first lesson in composing modern music, you need that H2O. Then it was time to kick back with the Glitch show on Fuser for a few sets. Aside from just dropping in different melody, bass, drum and vocal tracks from popular songs, she showed us the value of using your faders and filters to make the most of your mix. Nothing wrong with a bit of flange now and then.

Fuser's toolkit for bedroom DJs is pretty impressive, thanks to the library's 100+ songs – and each of them being split into four different tracks to mix together. But also thanks to some EZ Mode additions for when a mix doesn't go quite to plan and you need to switch up the tempo to hide it, as Glitch dutifully shows off for us. Just testing out the features, of course, for completion's sake.

It's not all about what you play from the stage in Fuser, though, so if you want to be the best virtual DJ in the game you'll need to look the part too. Part of the show is the stage, and Glitch took some time preparing a special HyperX Stage with plenty of BIG FIRE. It's what the fans want.

After showing off her skills on the digital wheels of steel, Glitch got back behind her usual instrument: a piano. She has no formal training, but has tooled around with a cheap keyboard since she was 13 (snapping seven of the plastic keys within a week of owning it and trying to superglue them back together) and now she uses her informal knowledge to make lo-fi tunes. So HyperX set her the task of making a two-minute stream intro or outro track from scratch. It went pretty well, if we're being honest.

The first step (even before adding the signature vinyl hiss, which is an absolute must for lo-fi music) is to figure out your chord progression, which for someone with zero formal music theory training is still as simple as putting in notes and seeing what they sound like together. Then scrapping it and starting again.

After that it's a simple matter of messing around with plugins, filters, equalizers, oscillators, samples and dozens of other doodads for around an hour and then boom, you have a two-minute track, EZClap.

If you'd like to find out more about those magic steps between "chord progression" and "finished track" then check out the rest of Glitch's hour-long lesson on making lo-fi music in the Twitch broadcast replay, which is DMCA-safe thanks to the magic of original creativity. And if that quick track got you interested in more of GlitchxCity's music, check out her YouTube channel.