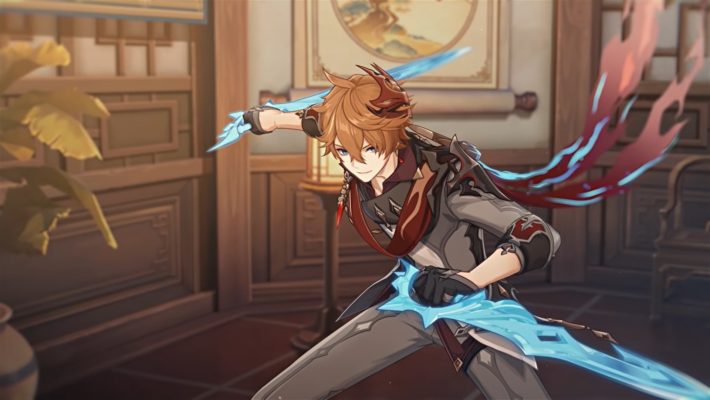 PS5 3D Audio explained: What headset do you need and how does the tech work?

What is 3D Audio? How does 3D Audio work on PS5? What headphones work with it? The answers you seek can be found inside.

Genshin Impact version 1.1 is just around the corner, so the patch notes have arrived to show us what we'll be getting on November 11.

Among the new content are the 5-star characters Childe Tartaglia, a Hydro bow-user, and Vago Mundo Zhongli, a Geo polearm-user. The 4-star characters, Katzlein Cocktail Diona (a Cryo bow-user) and Blazing Riff Xinyan (a Pyro swordswoman who is also some sort of shamisen rockstar), will also be added.

Other new goodies to get in wishes include the new weapons added to Genshin Impact in version 1.1. There are three new 5-star weapons: Memory of Dust (Catalyst), Vortex Vanquisher (Polearm) and The Unforged (Claymore). The first, Memory Dust, can be acquired in the new Epitome Invocation event wish until December 1. Memory of Dust is the first event-exclusive 5-star weapon in Genshin Impact, so if you're a completionist, or really love its stats when you finally get a glimpse of them, then be prepared to grind/pay some wishes to appease the gacha gods.

Of course characters and weapons aren't the only new things in Genshin Impact's 1.1 update, as the story continues with new quests and there are new systems, including the City Reputation System. Increasing your reputation in Mondstadt and Liyue will unlock rewards such as gadget blueprints, wind gliders, recipes and special city features.

You'll also be glad to know that some updates to the settings menu will now allow you to customize your keyboard or controller buttons in Genshin Impact, so head to Settings > Controls and everything will work as it should after the 1.1 update.

For the full Genshin Impact version 1.1 update patch notes, including stats and abilities for Memory of Dust, Vortex Vanquisher and The Unforged, check out the below.

◇ No. 11 of The Harbingers, also known as "Childe." His name is highly feared on the battlefield.

◇ A young lady who has inherited trace amounts of non-human blood. She is the incredibly popular bartender of the Cat's Tail tavern.

◆ During the event wish "Farewell of Snezhnaya", from after the Version 1.1 update to 2020/12/01 15:59:59 (Server Time), the event-exclusive 5-star character "Childe" Tartaglia (Hydro) and the 4-star characters "Kätzlein Cocktail" Diona (Cryo), "Uncrowned Lord of Ocean" Beidou (Electro), and "Eclipsing Star" Ningguang (Geo) will have their Wish drop-rates greatly increased!

◆ The “Test Run” character trial event will be available from after the Version 1.1 update to 2020/12/01 15:59:59 (Server Time). Travelers can use fixed team compositions that contain the trial characters to complete designated challenges. Once the challenge is complete, you can obtain the corresponding rewards!

◇ A mysterious guest invited by the Wangsheng Funeral Parlor. Extremely knowledgeable in all things.

Golden Majesty: Increases Shield Strength by 25%. Scoring hits on opponents increases ATK by 5% for 8s. Max 5 stacks. Can only occur once every 0.3s. While protected by a shield, this ATK increase effect is increased by 100%.

◆ The event wish "Epitome Invocation" will be available from after the Version 1.1 update to 2020/12/01 15:59:59 (Server Time). During this time, the event-exclusive 5-star weapon Memory of Dust (Catalyst) and the 5-star weapon Skyward Harp (Bow) will have their Wish drop-rates greatly increased!

◇ This sharp polearm can seemingly pierce through anything. When swung, one can almost see the rift it tears in the air.

Increases Shield Strength by 25%. Scoring hits on opponents increases ATK by 5% for 8s. Max 5 stacks. Can only occur once every 0.3s. While protected by a shield, this ATK increase effect is increased by 100%.

◇ Capable of driving away evil spirits and wicked people alike, this edgeless claymore seems to possess divine might.

Increases Shield Strength by 25%. Scoring hits on opponents increases ATK by 5% for 8s. Max 5 stacks. Can only occur once every 0.3s. While protected by a shield, this ATK increase effect is increased by 100%.

*The weapons Vortex Vanquisher (Polearm) and The Unforged (Claymore) will appear in a subsequent event wish.

◇ This polearm was once cherished by a member of the old nobility that governed Mondstadt long ago. Although it has never seen the light of day, it is still incomparably sharp.

*The weapon Royal Spear (4-Star Polearm) will be available in Starglitter Exchange in the Shop.

◇ The mysterious emissary Ganyu appears before you at Third-Round Knockout. Claiming to have come at Ningguang's behest, she invites you to the skyfaring palace known as the Jade Chamber.

To that end, you and Paimon have come to Mt. Tianheng, from where you can see the Jade Chamber in the distance...

◇ The Millelith have received numerous eyewitness reports recently that have confirmed an active Ruin Guard presence in an area far beyond their normal range of activity. After some investigation, you find that these Ruin Guards are, in fact, just toys for a certain child...

Complete these quests and obtain Mora, Character EXP Materials, and other rewards!

◆ Event Rules: During the event, complete designated quests and "Star of Destiny" challenges to obtain Fading Star's Might and Fading Star's Essence!

*The Gliding Challenge and While It's Warm events will become available at a later date. Stay tuned for more information.

◇ Reach Adventure Rank 25 and complete the corresponding quests to unlock this system.

◆ Travelers can speak to Knights of Favonius Coordinator, Hertha and Ministry of Civil Affairs Secretary, Ms. Yu to take on new Bounties and Requests. You can also collect Reputation EXP rewards from them for World Exploration, Mondstadt Quests, and Liyue Quests.

◆ As you increase your Reputation Level, you will unlock special city features, recipes, gadget blueprints, namecards, wind gliders, and other rewards.

A collection of Equipment, Materials, Geography, Books and Tutorials.

• Added customization options for keyboard and controller: Go to Paimon Menu > Settings > Controls, select a function to change the key or button assigned to it, and press any key or button to assign it to this function.

• A Report function has been added to Co-Op Mode.

That's everything worth getting excited about in the Genshin Impact 1.1 update patch notes, are you going to try your luck to get the Memory of Dust catalyst or one of the new 5-star characters?