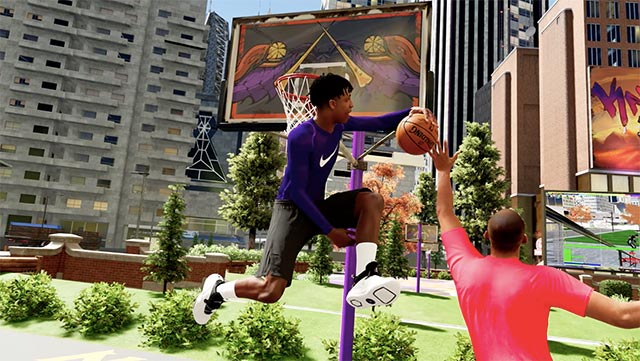 Mentally I'm here: The game worlds our minds are retreating into via memes

A meme began spreading on social media this month revealing which game worlds people long to dive back into.

NBA 2K21 Next Gen will add a new city map for you to conquer in MyPLAYER mode, with rival neighborhoods and post-shot emotes for maximum disrespect on the court.

The City is the game series' biggest map ever, with four boroughs each with their own rival team for you to align with or crush. The park offers you the chance to become the mayor of a town which features more basketball courts than parking spaces, one of which pays tribute to Kobe Bryant as the Black Mamba court.

There are training facilities, social spaces (to show off those undoubtedly expensive emoji dances) and stores to purchase a new look for your custom MyPLAYER character. There are also multiple game tournaments for you to enter in the main skyscraper of The City, including Haywire, Court Conqueror and Club 2K matches.

We're excited about the general idea of The City because it seems like someone at 2K has played one of our favorite basketball games, NBA Street (Vol. 2, if we're being picky) letting you put together your own style and disrespectful post-shot celebrations. Hopefully the next iteration of The City will add springs to your shoes so you can do insane full-team alley-oop setups from above the rim. It also helps that The City has a vaguely PS2-era look to it, with flat textures and over-saturated custom player jerseys wandering around. No doubt part of the Faustian bargain in getting a park this big to run on anything less than a server farm.

NBA 2K21 The City will be added to the Next Gen version of the game, presumably because that is a massive open space for your PS4 to handle without taking off like a jet engine. NBA 2K21 Next Gen will be a launch title for PS5, Xbox Series X and Series S.