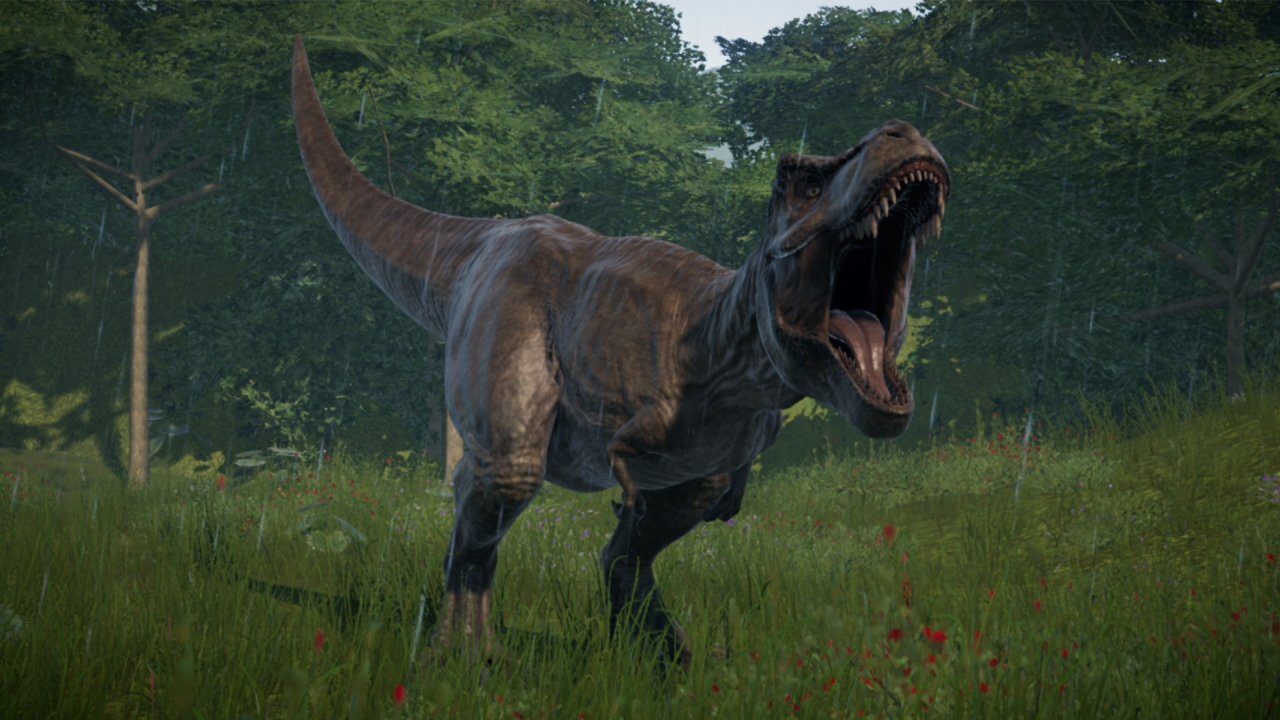 Unless you’re packing a gigantic meteor, dinosaurs are, rather notoriously, difficult to control. It’s the primary lesson of Jurassic Park, and has been reiterated to us in every one of its sequels. That reputation didn’t stop the seasoned park crafters at Frontier Development from stepping up to the plate, however. With Jurassic World Evolution: Complete Edition arriving on Nintendo Switch this week, we sat down with Frontier’s Game Director Richard Newbold to discuss the challenges and fun the team had in bringing such a beloved license to life and the Nintendo Switch.

Holding Planet Coaster (and now Zoo) under its belt, Frontier is no stranger to park design, but Tyrannosaurs and Pteranodons are a very different ballpark to roller coaster rides. The oversized lizards take center stage in the movies, so nailing the look and sounds of each in-game was essential.

“We’re very lucky in that Universal were a great partner and they’d give us some of the source assets and photography as they were being built for the film,” Newbold explained. “We used those to bring them to life in the game as authentically beautiful as possible.”

Well documented dinos is one thing, but as a park sim, Evolution needed to go further than the scope of the films. The T-Rex, dino diva that is is, has plenty of reference footage available, but crafting new dinosaurs is where things got trickier.

“We have over 60 dinosaur species in Jurassic World Evolution, but you’ve only seen around 10, 15 of those in the films themselves,” said Newbold. “We use the sort of Jurassic feeling as a base as opposed to, say, the scientifically accurate version. Science has gone a lot further into feathers, but we always use the Jurassic design first. So the Suchomimus – which is the first dinosaur to come to my head, how about that? – is one you’ve never seen in the films. But we used the kind of look and feel of how the dinosaurs are in the movie as the base and went from there.”

Returning to the origin

Jurassic World Evolution: Complete Edition packs in all of the game’s DLC thus far, including a return to the original movie’s park and island of Nublar. Taking on a film held in such high regard by fans proved to be one of Frontier’s most daunting tasks yet. Thankfully, many of the team are lovers of the movie as well.

“There was definitely a lot of pressure having a DLC focussed on Jurassic Park,” Newbold admitted. “For us, it’s Jurassic World Evolution, It’s a Jurassic World game. But there’s a lot of the dev team that love this franchise because of the first film, so it was a great opportunity to go to the films that we had a big connection with and bring a park building experience around that to players.

“The keen Jurassic franchise dinosaur lover will know that Triceratops look slightly different between Park and World, and so do the Brachiosaurs. That was the kind of detail that we wanted to give fans and the community that love these films and enjoy the game.”

In the end, Isla Nublar itself proved the tougher beast to contain, as Frontier worked to give shape to a world largely held in our minds. The movies and books only provide so much structure to the island, meaning Frontier needed to step in and fill in the spaces between recognizable zones.

“Now obviously Steven Spielberg and Colin Trevorrow have a lot of film tricks that they use, that we don’t,” Newbold said. “You never saw the Nublar in Jurassic Park as a God view, with the camera pulling back so you could say ‘there’s the raptor pen, and there’s the gates, and there’s the operation center.’ You mentally had to figure out where they are.

“We all worked together saying ‘How did you interpret this? Where did you think the dilophosaurus was when Nedry falls down?’ We collaboratively came together on things like the fence design on the T-Rex paddock. When you’re watching the film you might not notice that stuff, but when you piece it together as a proper scene in a video game, it’s one of those things you notice and gives you an opportunity to solve it.”

They weren’t alone though, as many of the original film’s cast reprised their roles in Evolution. In the actors, Frontier found they had an excellent source of inspiration and knowledge.

“They really do love those characters, and it comes across in the sessions when they’re playing them,” Newbold said. “Someone like Jeff Goldblum, he just loves being Ian Malcolm. We have a writer who produces scripts for the game, and then we work with the actors themselves to finesse their roles.

“They’ve been playing them for years now so they can help us find the right words and voice that they themselves would say as those characters. BD Wong (who plays Dr. Henry Wu), helped us finesse the language of his character. He wanted to give him some depth so that he’s not just a black and white ‘I’m an evil villain!’ character. It was something that was great to have his feedback on.”

With several DLC packs pushed out following release, it’s safe to say that Jurassic World Evolution has done well for Frontier. But that doesn’t mean it met their expectations. Not in terms of player behaviour anyway, as malevolent park designers gleefully demolished the walls separating ferocious carnivores from the oh-so-tasty park visitors.

“We built it to be always on the edge of something going wrong,” said Newbold. “That’s the challenge for you. How would you deal with the problems you see in the films? But it has been quite surprising after launch just how many people let it fail on purpose, just to see what happens. We’re building it from the other perspective of putting together this Jenga tower, and players are like ‘I’m just going to take the worst brick out!’ It has been quite surprising to look into the human psyche. We’ve tried to lean into that more with some of the dinosaurs we added later like the Suchomimus.”

Thankfully, the results were also largely positive, as players shared phenomenal park creations on YouTube, forums, and with the Frontier team.

“There have been some really impressive parks,” Newbold said. “I can’t name who they were from off the top of my head but I’ve seen some really great recreations of Jurassic World’s Main Street, recreations of existing film sets, or what the San Diego park might have been from Jurassic Park: The Lost World. People taking what we give them and creating something unique is always great to see.”

With Evolution out on PC, Xbox One, and PS4, the Switch seemed the natural next step. Porting such an intensive experience to Nintendo’s hybrid is far from easy, however, especially as it marks Frontier’s first effort to do so. Thankfully, the team took to the task in earnest.

“When you’re finishing a game and rushing to the end, you’re throwing things in with a small amount of reckless abandon,” said Newbold. “So with the Switch version it gave us an opportunity to look at what we’d done and find optimizations and improvements to a system we’ve already implemented but maintain what we had before. A lot of the team found that quite invigorating as a different challenge. Through all of that, we always made sure that if we had to make changes in the quality of something, the dinosaurs were the last thing touched.”

Speaking of dinosaurs, it’s only right that we finish with an homage to the scaly beasts themselves. Questioned as to his personal favorite terrible lizard, Newbold returned to an old classic that any dino fan is sure to love.

“It’s not the Suchomimus,” Newbold said. “I’m sorry, I kept saying that one because I looked at it earlier! My favorite dinosaur is the Triceratops. It is pretty boring as a dinosaur to choose, and most people want you to go for a carnivore, but it was one of the first dinosaurs I looked at as a kid. In a way it’s so unique with the horns that as a kid it was so iconic that it appealed to me.

“It was one of the first dinosaurs I saw in the film up-close and alive, and it just cemented it for me. This was a thing I could imagine as being real. I know it was real, but Spielberg helped make it real in my mind and I’ve had an affection for it my whole life since then. Even though we keep adding more and more dinosaurs to Jurassic World Evolution, they just can’t top that Triceratops. You always remember your first dinosaur love.”

Our thanks to Richard Newbold and Frontier Developments for taking the time to speak with us about the game. Jurassic World Evolution: Complete Edition is available now on Nintendo Switch.