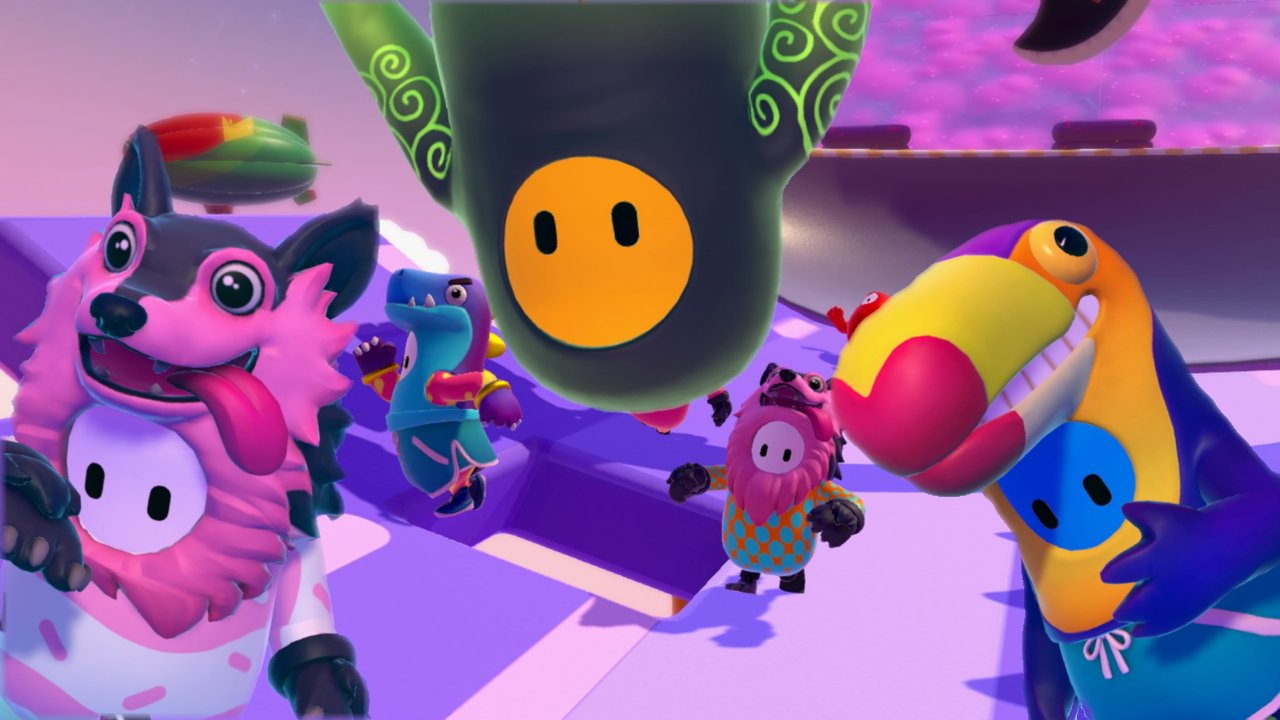 As the camera pulls back from scouring the stage, the opening to each Fall Guys run reveals a cavalcade of colour. Like a Jackson Pollock painting brought to fidgeting life, Beans of all patterns, clothing, and colors ready themselves to charge forth across the obstacle course before them. But what does your Fall Guys skin say about you? More than you might realize.

Through hundreds of rounds of extensive scientific research, we’ve identified the key archetypes in Fall Guys, as determined by choice of outfit. Studying these characters well will help you learn which beans to befriend or avoid on your hunt for the crowns of tomorrow, and perhaps unearth some inner truths about your own playstyle as well.

Oh, the poor sweet Wolfies. Finish a round of Whirlygig or Knight Fever, and you can be sure that spectating will reveal one or two wolf-clothed beans stumbling at the same, simple obstacle, time after time. It may be the spinning beams of Whirlygig, the massive girth of Thicc Bonkus, or a basic jump that they can’t quite seem to manage. It’s easy to laugh, but remember that we were all Wolfies once. Keep trying little bean, you’ll get there in the end!

Steer clear of the Fall Guys Boxer. This outfit brings out the worst in Fall Guys players, transforming them from cheerful little beans to grab-happy bastards. You might think that you’re an innocent fan of sports as you don this garb, but it won’t be long before the clothing corrupts your soul and you begin gripping any and everyone you can during Jump Club or Block Party. Shame on you Boxer, shame on you.

Fruit skin: the life of the party

Probably drunk at the wheel, Fruit skin Fall Guys are just here for the good times. Whether you go out in the first round or the final, it doesn’t really matter when you’re dressed as a pineapple in a tutu. You’ll often catch these players messing around at the end of a race, hugging each other in a group as they bumble over the line. Other Fall Guys dream of living the carefree life of a fruity bean, but allure of the next crown is often too hard to give up.

No outfit: the Clean Bean

The ultimate perfectionist. The Clean Bean requires no assistance nor indeed any attire on its path to victory. Material distractions are precisely that: hindrances to be discarded as you strive to achieve crowning glory. Will dressing like a hotdog help you win Fall Mountain? No, says the Clean Bean, who views the outfit indulgence around them with barely concealed contempt.  While early round blank beans may be pure beginners, if you encounter one of these in a game of Hex-A-Gone or Jump Showdown, you know you’re in for a tough fight.

Ninja/Witch/Messenger skins: the flavor of the month

The ultimate consumer. If it’s new, they’ve got to have it. You’ll see these beans return in droves whenever a new skin releases, flooding the maps with a mob of identical outfits. Several will use the anonymity of the horde to commit heinous crimes such as blocking the beams in Slime Climb and attempting to push folks off in Perfect Match. We’d recommend avoiding, but sheer numbers will make that impossible in the first few rounds. Probably used to be Fortnite players.

Duck/Horse/Toucan skin: the depths of depravity

Utterly deplorable. The dregs of humanity washed ashore on cliffs of slime climb. The only acceptable targets for grabbing and pushing. Should be removed from the map as quickly as possible before those haunting eyes begin to pierce your very being.

As owners of one of Fall Guys’ only paid DLC packs, the Mr Slurpees of the world already know that their bank balance is winning in real life. Rather than letting such affluence go to their oblonghead, these altruistic moneybeans are only here to help the rest of us grasp a fleeting taste of success in digital form. The Mr Slurpee goes out of its way to help where few beans would, offering selfless assistance no matter how futile their efforts may prove to be.

Do you disagree with our Fall Guys psyches? Have you discovered another persona in your wanderings through the Whirlygig? Share your bean-based stories in the comments section below! For everything else Fall Guys, click here to visit the game’s hub page.