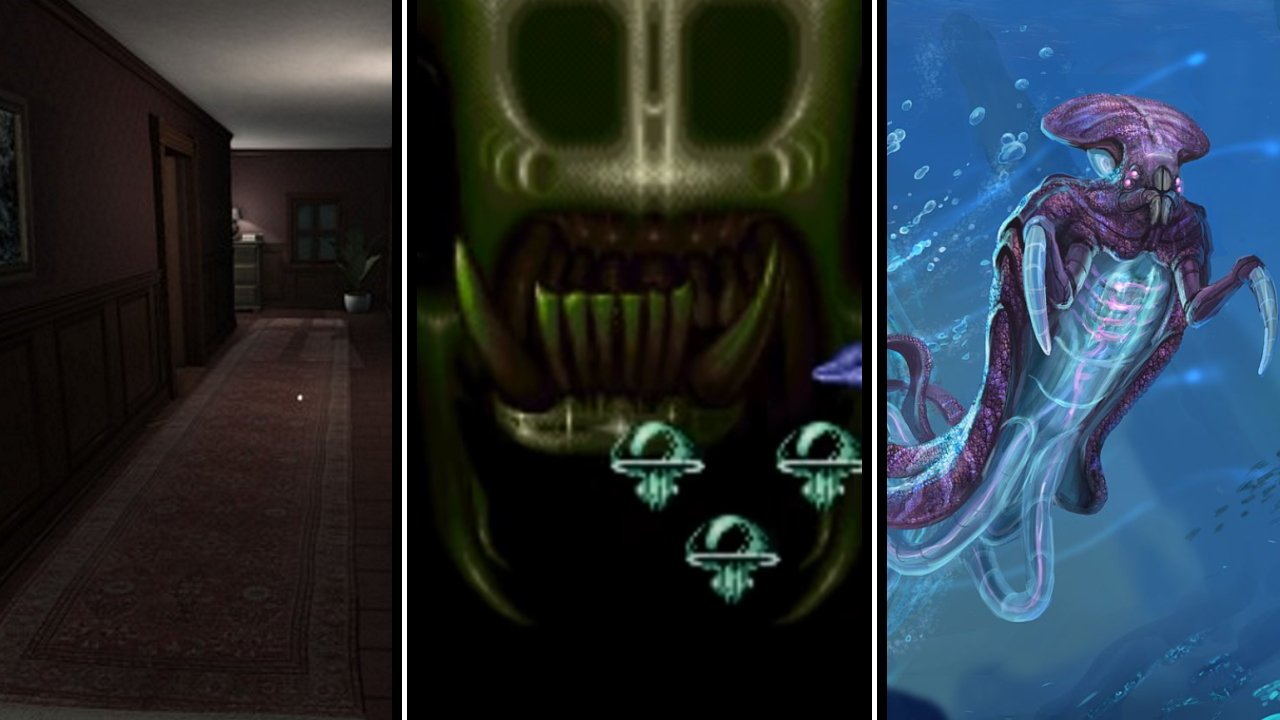 Horror games are so last Halloween. If you’re jaded by jump scares and have blitzed through the usual spookfest fare with your friends, you need to discover new avenues to score some frights. Or perhaps you’re the type of player who hates the tension of knowing that spooks are on the way. What you need are games that, ostensibly, aren’t horror titles, yet deliver the same bursts of adrenaline in the most unexpected places. And so, to fill your particular needs this spook season, we’ve rounded up a list of our favorite unintentionally scary games to play on Halloween.

Remember those early days of exploring Minecraft? Smacking away at trees and rocks to serene, plinky-plonky piano notes. Ahh, the better days. If you’re anything like us, it will have been quite some times since you last loaded up the seminal, blocky world. That means you’ve probably also forgotten the bone-chilling experience of your first in-game night, as the land turns from a cheery, sun-drenched paradise into a spider-ridden hellscape. Even worse is the burst of adrenaline that shoots through your body when you hear the fizz of a creeper on what you thought was a safe and simple spot of ore-mining. Yep, that means he’s right behind you.

If you’re playing on PS4, you now have the option to experience the ultimate form of Minecraft terror by whacking a PSVR headset on your noggin. Sure, you’ll get to enjoy the gorgeous procedural landscape sprawling out in front of you, but you’ll also need to handle a zombie moaning in your ear when he sneaks up out of the dark. Add in the Endermen, and you’ve got a VR title capable of rivaling Resident Evil 7’s spooks.

With Super Mario 3D All-Stars having arrived recently, you might think this year would make for a great time to revisit some glorious, colorful games from your childhood. And where better to start than a trip to Princess Peach’s castle with Super Mario 64. The trouble is, you’ve forgotten. Wandering the halls of Peach’s castle, it won’t be long before you arrive at Jolly Roger Bay, and the dreaded monster of the deep.

To this day, the eel lurking in the sunken pirate ship of Jolly Roger Bay remains one of the most harrowing enemies we’ve faced in a video game. Seriously, those eyes. Worse still, Super Mario 64 expects you to swim down to the beast and lure it out from its home. And in a single level, Mario 64 manages to be scarier than three entire Luigi’s Mansion titles.

No Man’s Sky has come a long, long way from its shaky initial launch, meaning it’s a great time to hop in a spaceship and start exploring some procedurally generated world. The trouble is, said procedural generation is just as likely to throw up planets packed with adorable fluffballs, as it is to fill worlds with hideous, many-limbed monstrosities. This Halloween, why not take a trip through the stars on a hunt for the most unseemly alien life you can. Then consider eradicating everything on the planet to save us all from ever seeing it again.

The idea of crash-landing on an alien world that’s engulfed by ocean is a pretty scary one already, we’ll concede. But Subnautica goes to great lengths to share with you the beauty of its underwater land, which is rich in colors and teeming with fascinating life. Plus, your home base is a hub of perfect safety; a bastion no creatures can breach.

Yet for all the effort the developers went to, the idea of diving into the great abyss is, to many of us, utterly terrifying. Even with a creative mode and console commands to make the player invisible to the more toothy inhabitants of the ocean, pushing further into the depths makes for a harrowing experience. Scuba diving in the real ocean already makes for a scary prospect, how do you expect us to pull it off on an alien world? And let’s not even get started on the idea of playing in VR.

Ecco the Dolphin is one of those retro titles that many gamers will have heard of, but few have actually played. The number of folks who’ve finished the game is even slimmer, which means most people won’t have encountered the insidious final boss known as the Vortex Queen. After swimming through sparkling blue seas, an ancient temple, and even being carried through the air by a pteranodon, the final level marks a sudden shift into the realms of horror.

Instead of swimming through seas, our aquatic mammal protagonist finds themself exploring the dark, seedy depths of an alien base. There’s a real Metroid vibe to the alien base, and the design of the final boss doesn’t help matters one bit. The Vortex Queen is a brain-meltingly atrocious mix of Ridley Scott’s Alien and a cuttlefish. If you weren’t repulsed enough, the battle forces you to headbutt its jaw clean off, releasing your pod and a thousand other bits of sea life that had been gobbled up. We’re not surprised you couldn’t bring yourself to digest them, Vortex Queen, as one look at your face is enough to turn our stomachs as well.

Fullbright’s Gone Home is intended to be a game of gentle exploration and sentimental discovery as you piece together the events in your family’s life in the time you’ve been away. Unfortunately, exploring a large, empty, seemingly abandoned home in a video game comes with certain connotations. Namely the expectation that a monster is planning to jump out at you at any moment.

To make matters worse, the game is set in the middle of a thunderstorm. Yes, a thunderstorm. One moment you’re in the middle of reading an emotional note from your sister, and the next you’re jumping out of your skin when the entire house lights up and rumbles. We’re pretty sure that the developers actually put these standard horror elements in intentionally, knowing full well that our timid tip-toes would only serve to lengthen the playtime. We’re still half convinced that there’s a monster lurking somewhere in all those secret passageways…

Those were our picks for some unintentionally scary games to play on Halloween. Do you know of any other titles likely to provide spooks and scares without meaning to? Share them with us in the comments below! For more traditional spooks, check out our list of the best multiplayer horror games you can play right now!