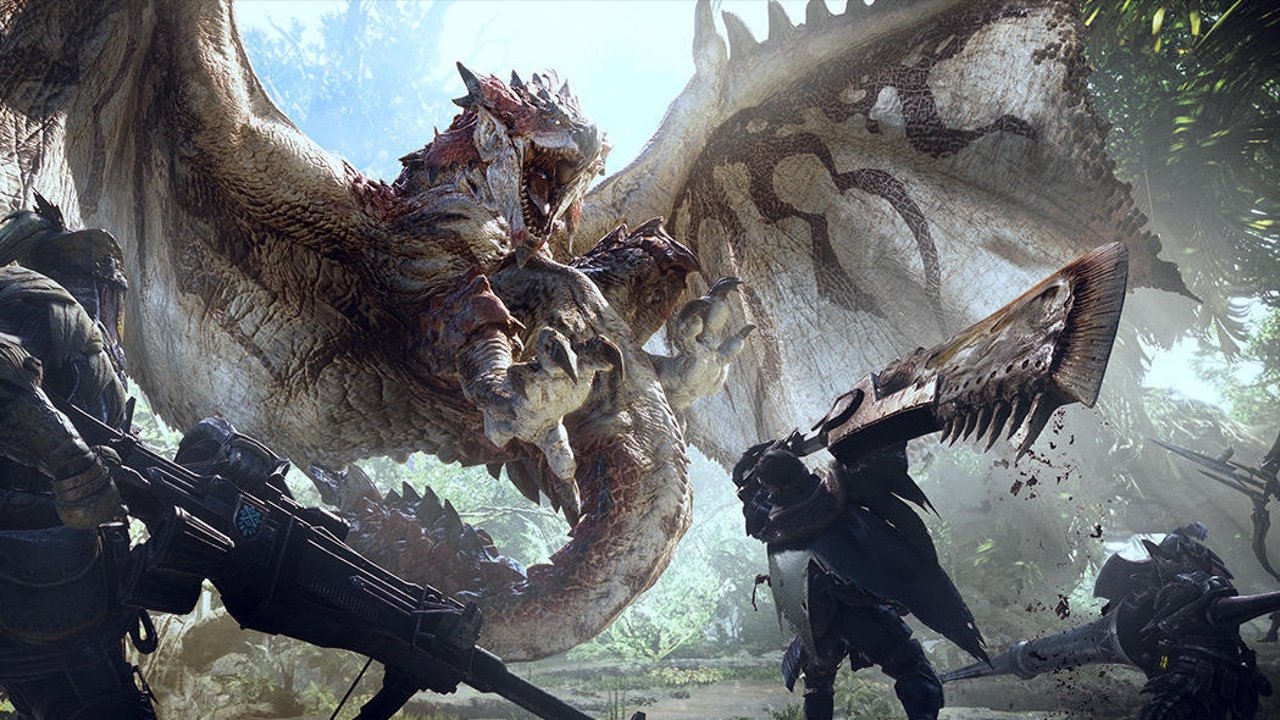 You've probably read a bunch of takes on Monster Hunter World from people who have been with the game since before half of us were born. Capcom's long-running series has done the rounds on everything from PSP to Wii U, nurturing its cult classic status among a dedicated army of fans. They all agree World is a triumph.

But what about those of us who have never really clicked with it? If that's the verdict you're interested in, good news, because we have bounced off the series several times in the past, mostly because we found the low-end visuals and load times were too much of a barrier for our vista-craving brain. As a result, we went into World in almost total ignorance of how it worked. All we knew is we needed to use a whetstone now and then.

Guess what? We think it's brilliant too.

Monster Hunter World is a simple game at heart. You and your little Palico cat buddy go out into vibrant, densely layered environments full of exotic flora and fauna, hunt things, and then return to base to create new gear out of the monster parts you harvested. Once you get your head around that core loop, it becomes incredibly moreish, and Monster Hunter World settles into the rhythm we used to find with Destiny, where the mechanics and environments were so satisfying that - even when we didn't have a quest to complete - we'd happily turn it on for an hour just to find some loot and make the numbers go a little higher.

It's a simple game at heart, then, but finding that heart can take a while, because years of iterative development have left the game bloated with systems, and it has an unfortunate habit of either failing to explain itself adequately, or throwing so many screens of text and video at you that it's easy to miss the significance of a key tutorial. Those series devotees we mentioned earlier have praised the game for paring back some of its more arcane rituals for this PS4 and Xbox One installment, but it's still a pretty hefty learning curve.

For example, one of the most important things in the entire game is selecting a weapon that suits you. There are over a dozen that you can choose between, but the game doesn't really emphasize the significance of this decision, and while there is a training area that you can access through your private quarters, the game doesn't tell you that it would be a good idea to go spend an hour there trying everything out until you settle on a weapon that feels great for your instinctive play style. There are probably a lot of players out there who will bounce off the game because they chose the wrong whacking stick and couldn't find the fun.

On balance though, we're inclined to give Monster Hunter World a pass for its dubious onboarding, because while the very early stages could definitely be clearer, the game's wilful obscurantism ends up being one of its greatest virtues.

Let's have a counterexample to the weapons thing. A good few hours into the game, we're tasked with taking down our first Anjanath, a lumbering T-Rex style beast that represents a greater challenge than anything else we've faced to that point. Once we find the beast, we decide it's probably a good time to send out our first "SOS Flare", a multiplayer system that invites other players to join your game session and help out. The flare goes up, and we get back to skirmishing with the Anjanath, rolling and blocking as much as possible to avoid its gargantuan swipes and charges, occasionally landing a hit with our lumbering Bone Sword but clearly taking more than we dish out.

Just as we're starting to doubt our stocks of potions will see us through, however, the Anjanath reels up as something small and flashy starts dancing through the air around its haunches. It takes a few moments for us to realise it's another player, doing things we never realised you could do in the game. They're using an Insect Glaive, a rapid-attack weapon that allows you to pole-vault into the air, dash around and unleash devastating aerial combos, complete with hand-picked "Kinsect" based buffs. We had no idea this thing existed, but suddenly we wanted nothing more in the world than to master its every form.

Monster Hunter World is more than a simple loot slasher, then - it's another of those games where part of the thrill is uncovering a seemingly endless diversity of new and entertaining systems and gameplay concepts. Whether you want to become a glaive sensei or master trapper, or you see a set of armor on another player that you must have, there always seems to be another target to set yourself, and by the time you've finished having fun on the journey to your destination, you've found another place to head next.