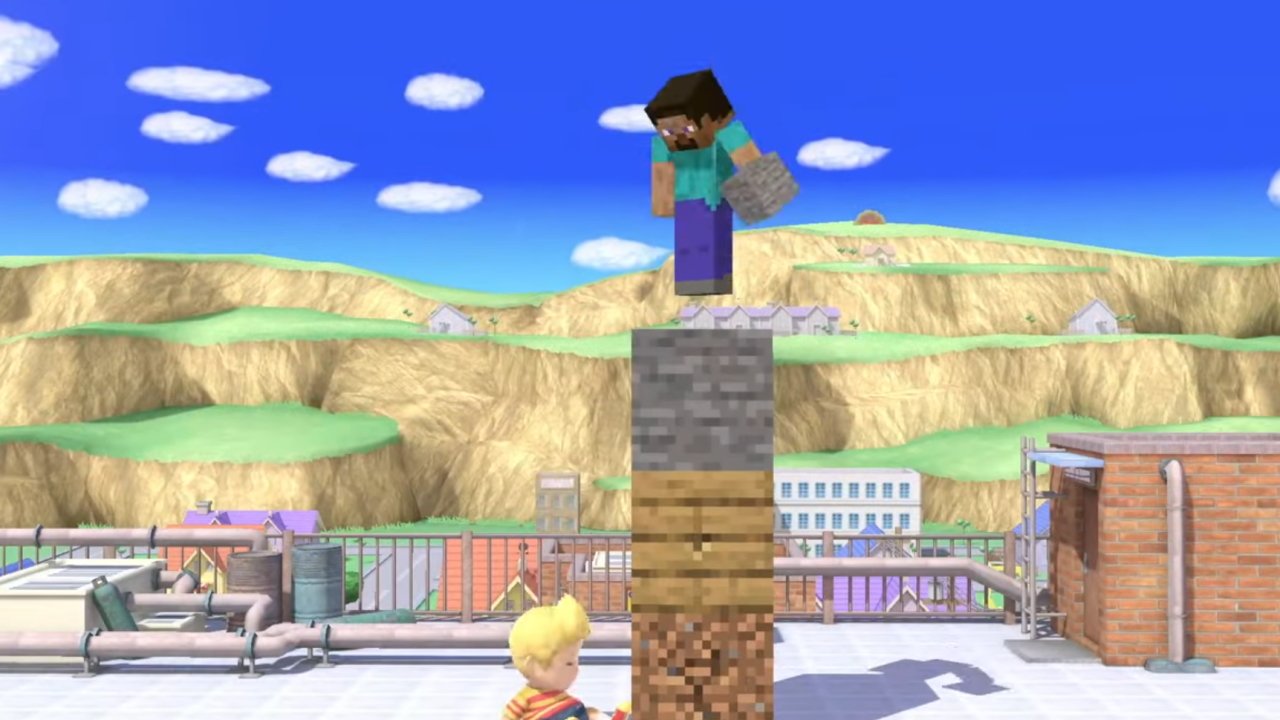 Well the news of Minecraft Steve joining Super Smash Bros. Ultimate was apparently big enough to break Twitter for a while, which means there must be more than a few folks out there interested to know more about our blocky new hero. While we’ll need to wait a few days for a thorough look at the character, the reveal trailer did give us a glimpse at the moveset. We’ve scanned the footage thoroughly to try and break down everything we know so far about the Minecraft Steve moveset in Smash Ultimate.

Our Minecraft Steve moveset in Smash Ultimate includes all the unique moves we’ve beenshown in footage so far. We'll update this list when any further information comes out regarding the names or actions of certain moves. We’re also calling the new character Steve, though alternate skins also allow you to play as Alex, a Zombie, or an Enderman instead.

Steve swings his sword rapidly if you hold down the A button. Can be done while moving and jumping

Steve lunges forward with his pickaxe. It's a quick attack with a bit more range thanks to his movement.

Because Steve performs his jab while moving, he doesn't have a tilt attack.

Steve sparks a fire on the ground. The fire lasts a short length of time, blocks projectiles, and falls due to gravity when placed in the air.

Steve swings his axe rapidly overhead. This attack is the same as his up air attack, just performed on the ground. Good for juggling opponents.

Steve hurls his fishing rod forward, tether-grabbing opponents. Different throws launch opponents with a piston or a heavy block. Down throw is intended as a combo move.

Minecraft Steve charges up a sword swing, arcing horizontally in front of him. The reach isn't very high, but it has strong knockback.

Steve splashes a bucket of lava on the ground either side of him, starting in front, then behind. This attack sends opponents horizontally, making it powerful against weak vertical recoveries.

Steve spawns a large magma block in the air above him for a short duration, burning any enemies which touch it. Knockback is low, but it's great as a followup to his up titlt or aerial, or as a defensive move.

Used at a crafting table, Neutral B creates or upgrades Steve's tools based on the resources you've mined. Tools break over time, and the order of quality is Wood < Stone< Iron < Gold < Diamond.

Crafting tables can be destroyed, but respawn after a short delay. To summon your crafting table to you, hold shield, then press B.

When used in the air, Neutral B places a block under Steve. This will used the cheapest materials available, and will continue placing if the button is held while moving or jumping. Blocks can be placed off-stage to help recover or block opponents recoveries, though they cannot be placed off screen.

Steve plants TNT, leaving a redstone trail behind (if resources permit) as they move backwards and place a detonator button. The TNT will explode when someone steps on the button, or after a delay. Fire-based moves ignite the TNT, as does the minecart. Players who step on the pressure plate aren't knocked as far as those nearby.

Steve climbs into a minecart and rolls to one side, planting track as they move. The cart can bounce off walls and even pick up other fighters once Steve hops out of it. Iron is needed to spawn the minecart, and other materials are needed for the tracks. If you have redstone, your minecart will get a speed boost at spawn, dealing more damage and knockback.

Steve dons the wings of Elytra, allowing him to glide sideways for a short distance. By default Steve will travel horizontally, but you can choose to shoot a short vertical distance, or swoop down and then up using momentum. Only the beginning of the move has a hitbox.

Steve swings his sword in the same method as his jab attack.

Steve swings his pickaxe in front of him in an overhead arc. This meteor spikes opponents hit mid-air, sending them down rapidly.

Steve swings his pickaxe backwards in a strike which hits with high knockback.

Steve slams downwards with an anvil underneath him, damaging anyone below.

One move we did get a clean look at is the Minecraft Final Smash. Any opponents struck are first smacked with a giant piston. Then, they’re boarded up in a castle filled with TNT, cobwebs, and creepers. Suffice to say, it doesn’t end well.

That’s the full Minecraft Steve moveset for Smash Ultimate, or as much of it as we’ve been able to decipher so far. Have you spotted any moves or details that we missed? Let us know down in the comments so we can add them! The full moveset was unveiled on October 3 in the presentation by Super Smash Bros. Ultimate Director, Masahiro Sakurai. Steve is due to release in October so you don't have to wait long to try him out!