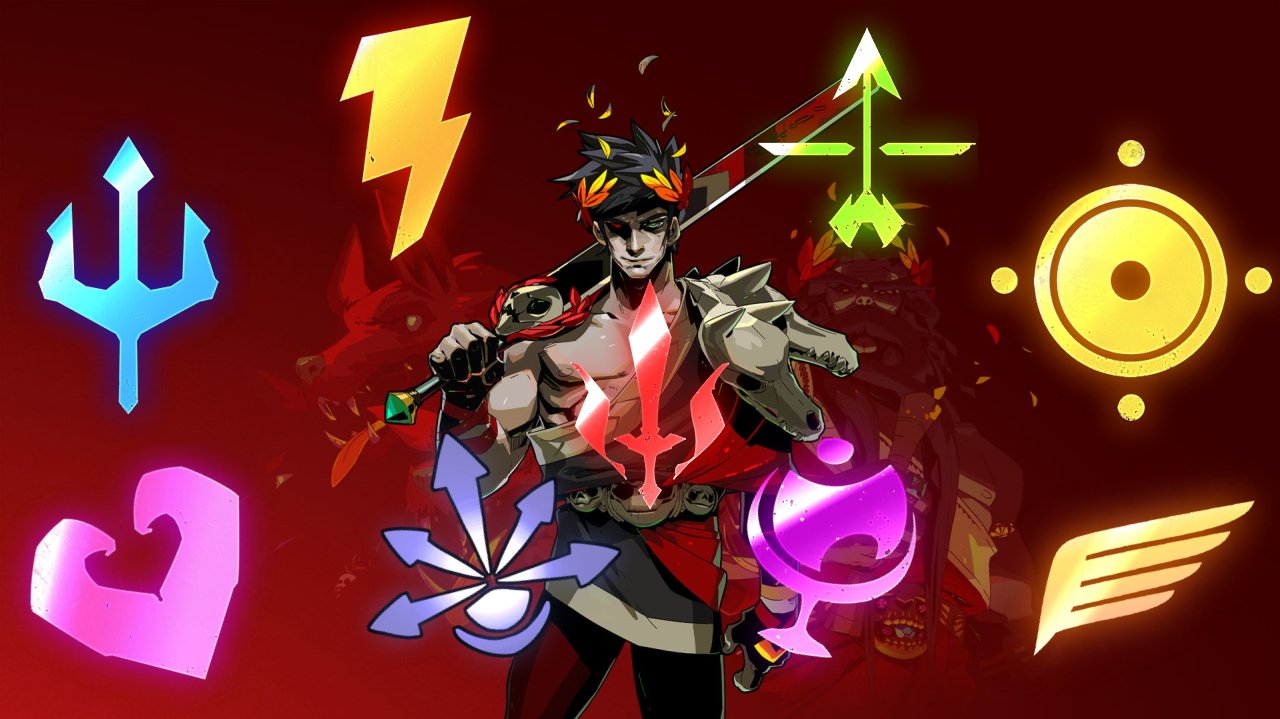 The next Smash Ultimate fighter will be revealed tomorrow

Hades smartly lets you pick which bonus you want to fight for as you clash through the Underworld, but because each God is marked by a symbol rather than a name, you might have some trouble remembering who is who. It’s a bit of an Olympian faux pas to mix up Artemis’s symbol for Athena’s, or Poseidon’s symbol with Ares’, so in this guide we’ve listed out all thee God symbols in Hades so you can easily identify which Boons you’re going after.

Below you’ll find an alphabetical list of all the God symbols in Hades, as well as a small bit of information on the types of Boon each God offers.

Aphrodite is the Goddess of love and beauty. Her Boons tend to inflict negative effects such as Weak and Curse on your enemies. By reducing enemy attack damage and making them easier to kill, Aphrodite’s Boons will typically help you live longer. Aprhodite’s symbole is a pink heart, curled at the upward edges around a central gap.

Ares is the God of war. Ares’ Boons tend to increase Zagreus’ damage, or inflict Curse and Doom on your enemies. He also provides several Blade Rift Boons which deal heavy damage to enemies caught within them. Ares’ symbol is a red sword pointing upward, with red flames on either side.

Artemis is the Goddess of the hunt and wilderness. Her Boons usually increase your chances of scoring critical hits. In addition, she has several Boons which boost your Cast uses and damage. Artemis’ symbol is a green vertical arrow piercing a horizontal line.

Athena is the Goddess of wisdom and strategic warfare. Her Boons tend to provide Zagreus with defensive buffs, or allow him to deflect enemy attacks back at them. Many of her boons cause enemies to become Exposed, taking extra damage when struck from the rear. Athena’s symbol is a golden circle with a ring and hole, as well as four dots at the left, right, top, and bottom edges.

Chaos is a being representing the primordial void which gave birth to the initial Titans and Nyx. Chaos’ Boons are unique in that they give Zagreus a temporary debuff for several encounters. Once passed, they will grant a permanent boost for the rest of the run. Chaos’ symbol is a downward-facing semicircle with arrows spreading outward from the top.

Demeter is the Goddess of agriculture and the seasonal cycle. Her Boons typically boost damage and inflict Chill, which slows and shatters enemies. Demeter is one of the few gods to increase healing capabilities with her Boons, making them very valuable indeed. Demeter will only appear after you've made it to the surface for the first time, meaning you won't see her for quite some time if you've just started. Demeter's symbol is a blue, frosty looking wheat leaf at a 45 degree angle (a stick with leaves sticking out either side).

Dionysus is the God of wine and madness. His Boons typically apply Hangover to enemies, or serve to slow and stun them. The effects of Hangover can be stacked up to five times, dealing increased damage to foes affected. Dionysus’ symbol is a purple, filled chalice.

Hermes is the God of travel, commerce, and trickery. As you might expect, his Boons grant increases to Zagreus’ speed, both in attacking and movement. Hermes’ symbol is a golden wing.

Poseidon is the God of the sea and brother to Zeus and Hades. His Boons tend to increase Zagreus’ direct damage, or allow him to knock enemies away. Some of his Boons apply Ruptured, causing enemies to take damage as they move. Poseidon’s symbol is a vertical blue trident.

Those are all the God symbols in Hades. If you ever have trouble identifying a symbol during your run, then feel free to hop back here and give yourself a quick refresher course on deities. Want to know what the other door symbols mean when you're picking between your next rooms? We've broken down all of them for you here. For more Hades tips and tricks, park your godly rear over at our Hades hub page. Even a demigod has plenty to learn!