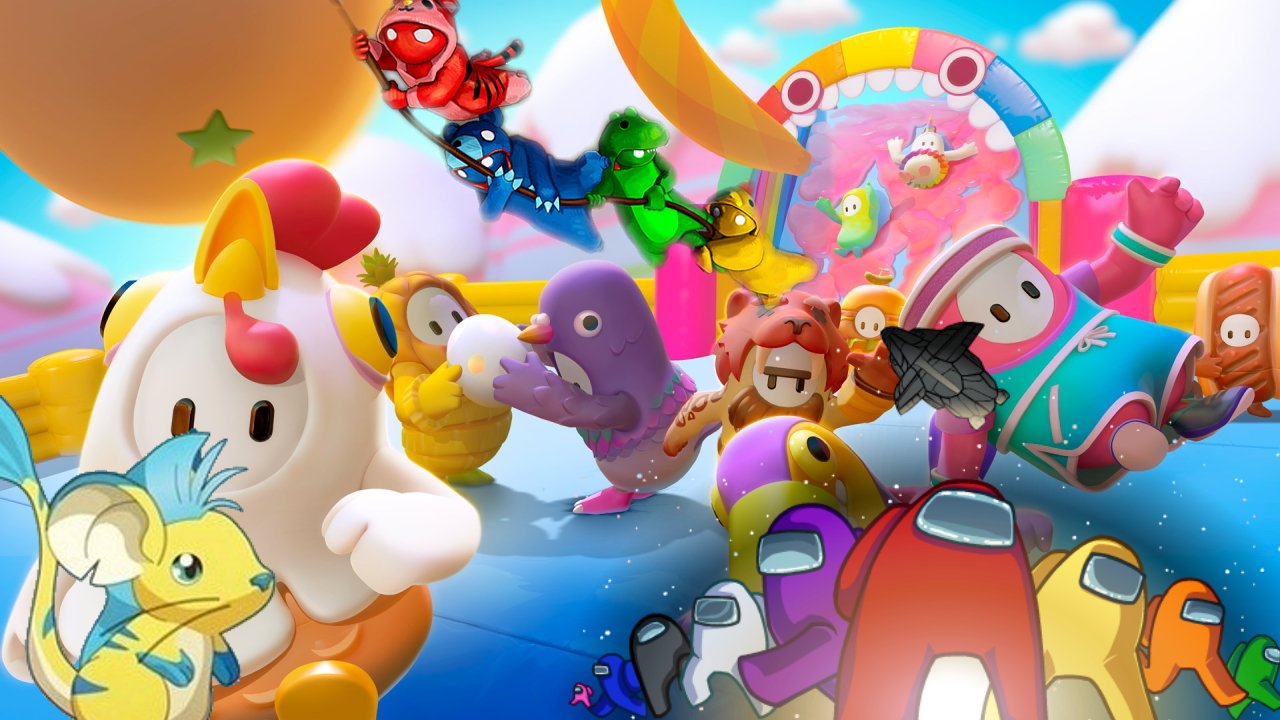 If you’re looking for games like Fall Guys then we’ve got both good and bad news. Mediatonic’s bean-based battle royale did a brilliant job of cornering a unique niche in gaming. As such, there isn’t much else out there precisely like it. That said, there are plenty of games that evoke that same hilarious sense of physical comedy, have madcap multiplayer, or produce tense final showdowns. To that end, we’ve collected a list of games like Fall Guys below which are well worth a look if you’re getting tired of being punted off Slime Climb by malicious-minded jelly beans.

Similarities to Fall Guys: Physics-based levels to fall off over and over again.

Fall Guys’ cooperative team levels are easily the worst of the collection. Thankfully, there are games out there like Human Fall Flat which prove working together can be fun. Sometimes. Attempting to guide your plasticine person around floating island levels, your aim is to assist one another in solving physics-based puzzles as you build and bumble your way to the end goal. That’s easier said than done, and much like Fall Guys you’ll spend an awful lot of time shouting as other players mess up your well-laid plans. Only here you’ll be shouting at your friends rather than the yellow team. Is that an improvement? You decide.

Similarities to Fall Guys: Silly physics levels, but now you’re trying to kill your friends on them instead.

Once you get sick of trying to work with your friends, Gang Beasts will allow you to vent that anger by leathering them repeatedly, chucking them in front of a train, and then feeding them into a grinder. While that sounds gruesome, this is hardly Mortal Kombat. Sharing a similar look to Human Fall Flat, Gang Beasts’ marzipan men are prime targets for physics-based knockouts. Handily, the game provides plenty of ridiculous levels in which to score them. In Gang beasts you can battlein subway stations, on top of a zepelling or while enjoying a ferris wheel. Any excuse for a punch up, really.

Similarities to Fall Guys: It’s basically the 2D predecessor, but everyone is a mouse.

Probably the closest game on this list to Fall Guys, and one that predates it by many years. Transformice is a free-to-play online game that sees hordes of players scrambling through side-on, physics-based levels. The aim is to grab the cheese and make it back in one piece, but levels typically rely on (or break due to) a critical mass of mice bundling themselves onto a platform. Each stage is an incredibly silly dash which rarely lasts more than a few minutes. But with tricks like wall jumps and slides, there’s plenty of room to step up your skills. Formerly an online flash game, you can now join in the fun on Steam as well.

Similarities to Fall Guys: The deaths of a thousand bean people.

Despite releasing back in 2018, Among Us has only recently exploded in popularity. In it, players work to repair broken parts of a space ship or station. The trouble is, not everyone is aiming for such cheery collaboration. One or two of the players in your midst are imposters, whose only job is to kill everyone else without being voted out of the airlock. The tricky part is that the entire game is played in silence unless someone reports a dead body or calls an emergency meeting. On the face of it, there’s little here like Fall Guys, but fans have been quick to make memes about how both games feature unfortunate bean men. And if you’re looking for another way to have a laugh (or the occaisional scream) on Discord with your friends, Among Us is a cracking choice.

Fine, fine, there’s no escaping it really, is there? Fall Guys sold itself as a fresh take on the battle royale formula, so if you’ve somehow escaped what the genre has to offer thus far, Fortnite’s prime color palette makes it the closest thing on the market. 100 players drop into a brightly colored island to scavenge for guns with which to shoot one another to death. An ever closing ring forces players into closer and closer quarters until only one player or team remains. In short, it’s Fortnite.

Know of any other games like Fall Guys? Share them with us in the comments section down below the article! For more Fall Guys content, click here to head over to our hub page for the game.