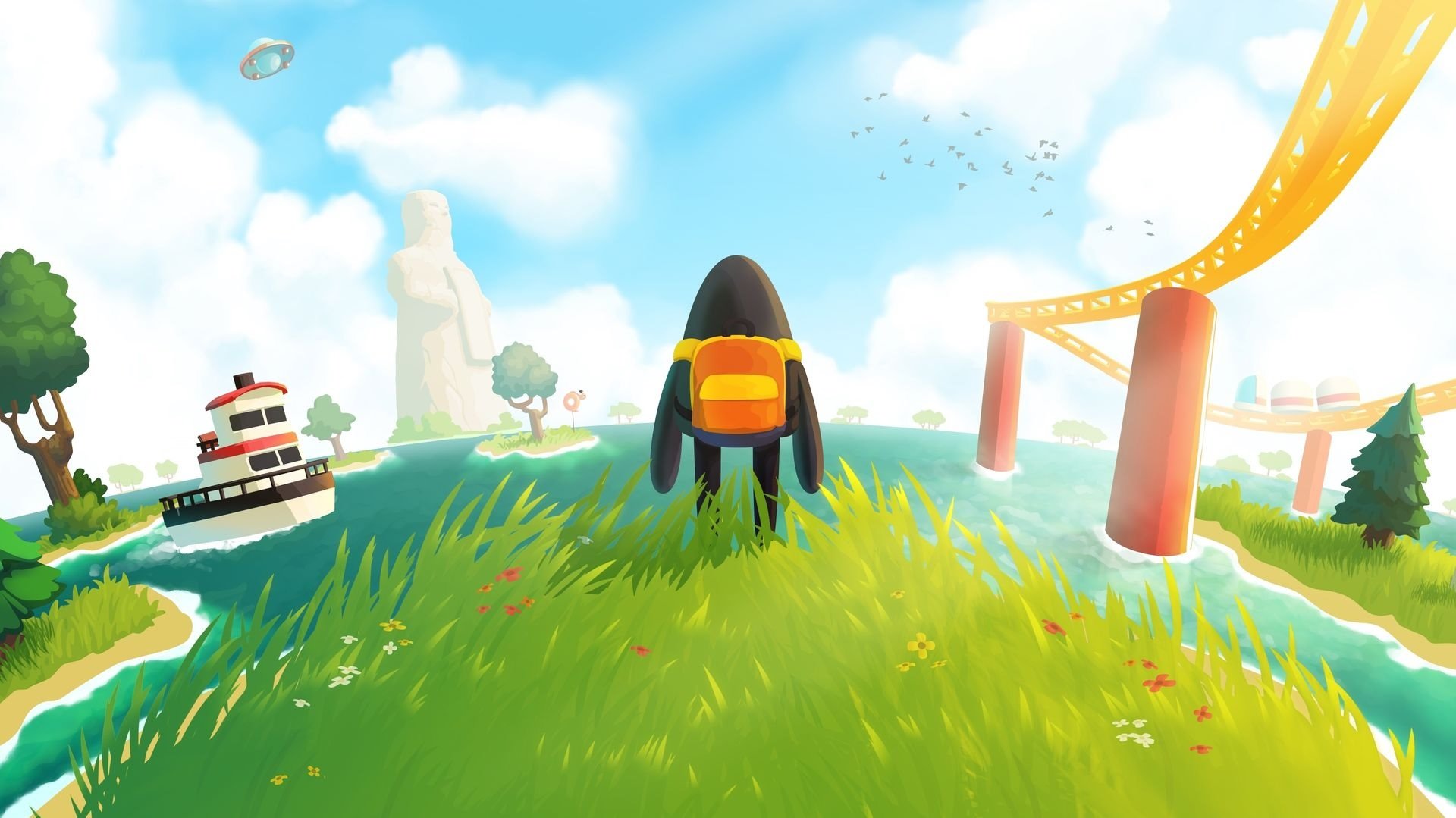 It's been exactly one year since Apple Arcade unveiled its subscription service for new, premium games on your iDevices every month. At launch there were around 50 games, of which we picked out some of the early bangers, but there have been dozens and dozens of new games added since then. The best games on Apple Arcade is a constantly revolving set of accolades, with even more games being added per month.

A subscription commitment can make trying out some of these games hard to know where to start, but with the new subscription packages announced by Apple yesterday – including the Apple One package with Arcade, Music, News+, TV, iCloud storage and the newly announced Fitness+ app – it's the best time to try it out. Here are the best games on Apple Arcade if you do fancy giving it a shot. You won't be disappointed.

This recent addition to Apple's game library is one of its best yet. A simple open-world puzzle filled with deceptively tricky log-rolling conundrums to solve. The world is apparently an open-air museum for monsters dedicated to human museums, with a number of scathing and hilarious observations about everything from the mysteriously powerful velvet rope forcefield to the importance of plinths. A great headscratcher but also very laid back and chill.

This is the first game from No Man's Sky studio Hello Games since their quest to create an entire universe began. Obviously it's a lot smaller in scope, something of a palette cleanser for the tiny team that made it after years of hard slog. There are puzzles to solve but mostly it is an adventure and a journey to meet cute and lovable characters. Great to relax with after a long day of your own tiring journey.

For those who prefer a little more brutal energy to their puzzlers, Grindstone hacks and slashes its way through dozens of battlefields. The puzzle element is that you can chain together enemies of the same color, building up a combo number. This number then represents your attack power to chain into rarer, more powerful units on the board. Some of these rarer units let you change the color of enemy you are chaining together, letting you plot out increasingly complicated, loopy paths of bloodshed. It's extremely moreish, and just had a new update, so there's even more levels and upgrades to plough through.

Combining together Melbourne's coffee culture and the questionable ethics of bringing people back from the dead, Necrobarista is a very stylish and cinematic game. There's a little more style than substance, but if you like the way it looks (and sounds, given the music by Kevin Penkin, BAFTA-winning composer for other mobile game phenomenons like Florence) then it's a nice way to while away a few hours on your phone. Playing more like an interactive story, through the usual visual novel interactions of dialogue choices and word salad, there's a good plot to enjoy the aroma of.

Published by Chucklefish and developed by a tiny team from Lithuania, INMOST follows a dependable formula of puzzle-platforming and pixel art. In among those two staples there are three playable character, interweaving their separate stories together throughout the game, each with their own gameplay mechanics, from sword combat to survival stealth. The visuals have a bleak beauty to them and each character's story drips with the same melancholy of its color palette, but in an intriguing way that builds to a satisfying story conclusion. Only about 3-5 hours long, this is the perfect game for Apple Arcade, providing a long single-sitting playthrough.

Possibly the best game we've played on Apple Arcade. Also available on PS4 and Nintendo Switch today, it's a fantastic mix of neon-soaked visuals, pop bangers, tarot themes and a tale of heartbreak. Sayonara Wild Hearts is, at its wildest of hearts, a rhythm game but thrown in with some shmup energy and a constantly evolving and shifting level design. The environments progress nicely along with the story, too, taking you on an arcing path through the stages of dealing with the pain of a loss. Metaphorically speaking, of course. Our last break up had nothing to do with robot wolves in a psychedelic forest.

Many of Apple Arcade's best games are puzzlers, this one taking cues from the mind-bending Escheresque landscapes of fellow App Store hit Monument Valley. Impossible architecture provides the backdrop for physics-defying puzzles with geometric designs. Get lost in the non-euclidean spaces tucked away inside infinity. Manifold Garden is the sort of game that rewires your brain for a bit while you're playing it, so that when you stop and pick it up again later you're confused about how you could ever have traversed this place. Best suited for long play sessions where you want to dive into another world entirely.

If you're a fan of detective titles then Tangle Tower is a perfect itch to scratch. Plenty of fun dialogue and sneaky clues to put together, along with sumptuously drawn background art. Voice acting is natural and very funny in places, and the music makes this an ideal game for headphones-on escapes on long journeys or even just rainy days cooped up indoors.

Right, so, we've seen What The Golf before, at EGX last year, and we loved it then. But having played through almost all of it in a single night we're convinced this is worth anyone's time. Especially if you're not a golf fan. Because, of all the games that this is, it is not a golf game. Sure, you play with the same swing power input of other golf games, but instead of hitting your golf ball into a hole with precision accuracy, you send a barrel rocketing through a winding course of trees to knock over a cat. Or help a snowboarder make it across chasms. There are loads of other games recreated in here, too, including an entire area of the game which replicates the time-bending movement in SUPERHOT. You can pick up putters to fire them like a gun at enemies, and when you finish a level it flashes SUPER PUTT on the screen and does the voice and everything. None of the mechanics stay around long enough to get boring, so you end up rushing into every new area to find out what delights await. What The Golf is an absolute must-play if you grab Apple Arcade.

Not every game is a thoughtful puzzler, Cartoon Network's Samurai Jack is a sword-swinging action game with larger-than-life bosses and hordes of robotic minions. Developed by Adult Swim Games, and faithful to the long-running cartoon series, the time-travelling samurai fights familiar enemies in locales from the TV show, and with plenty of combos, abilities and weapons (aside from your sword of legend) there are countless ways to take the fight to Aku. Works best with a controller, so it's lucky that every single iDevice, including iPhone, can pair with BlueTooth controllers like the PS4's DualShock and Xbox One controller.

From Monument Valley devs, usTwo Games, comes this short and sweet story about repairing things. Everything in this drag and drop puzzle-solver where you fix broken items is a joy, from the fonts to the audio design (best experienced through a good pair of headphones). Even though it's all tapping and swiping, buttons of cassette players feel distinctly chunky, and twisting tools to get into the innards of electronics is somehow still tactile. There are only 12 objects to mend, but each comes with a vignette of storytelling which goes well with the item you're repairing, reminding us all that what is broken is never truly lost forever.

Over The Alps is a postcard adventure from the past, full of espionage and double-crossing. It reminded us a lot of Inkle's 80 Days, with branching narratives as you choose your next action as the next line on a postcard before placing another stamp in the corner. These postcards have been discovered in the modern day, by a couple raiding an old wine cellar for another bottle. But the story they tell is from pre-war Europe, as a mysterious protagonist (part of one of several spy factions depending on your starting choices) attempts to evade the Swiss police in countries rendered in the beautiful style of mid-century travel posters. Good for long trips where you want to feel a little more dangerous than just heading home for the holidays.

Those are the best Apple Arcade games so far, as determined by a complex algorithm of: our subjective tastes. Is there a game that you love that isn't on there? Let us know, we love hearing about the hidden gems in the Apple Arcade library that we haven't appreciated fully yet.