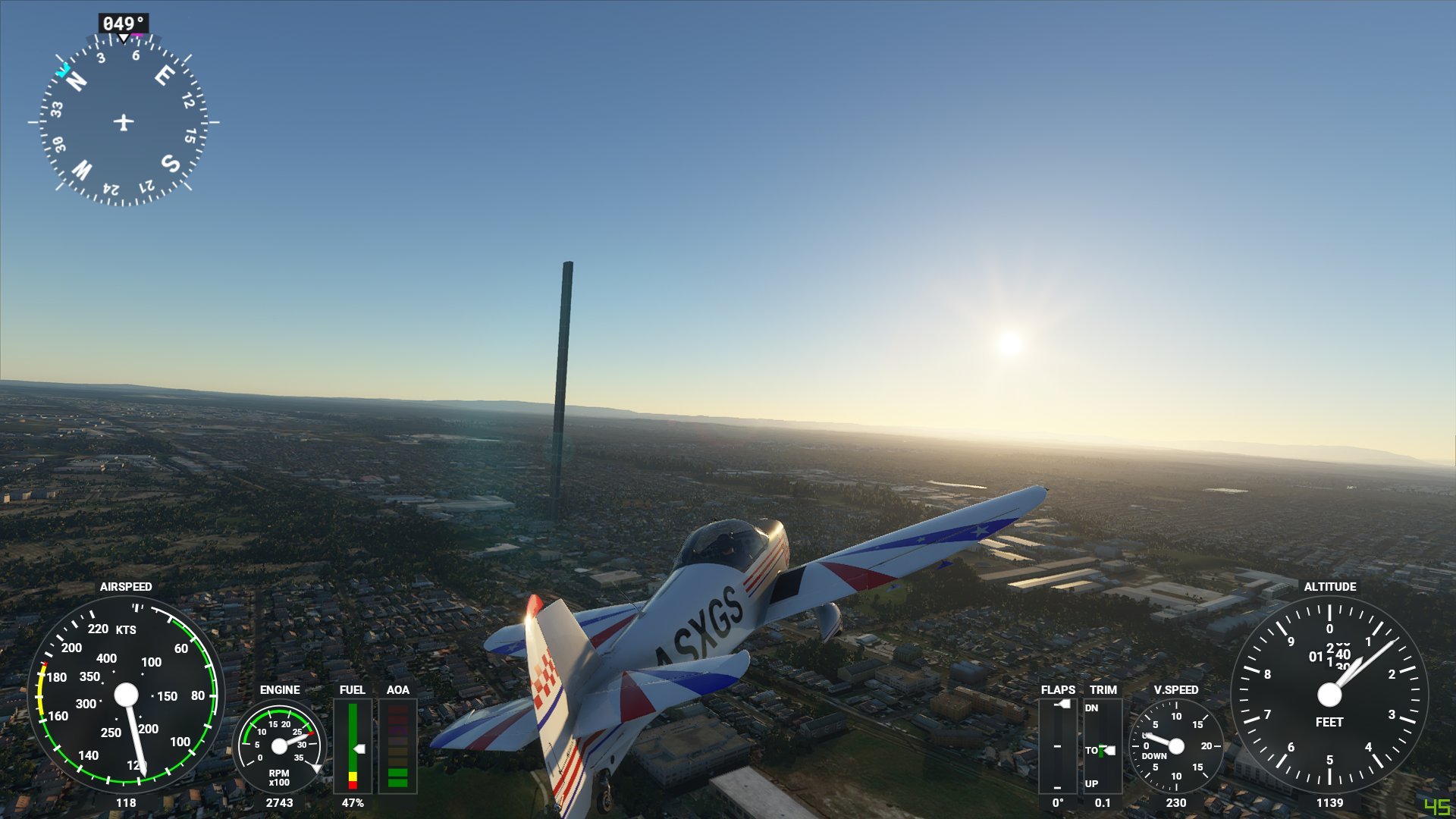 How a typo created the terrifying Melbourne monolith in Flight Simulator

Flight Simulator 2020 is now out in the wild, providing plenty of opportunities for amateur pilots and desktop background aficionados the world over to enjoy its intricate recreation of our planet. However, a few errors are pulling at the seams of reality thanks to the way Microsoft and developer Asobo have found shortcuts to populate a game world as big as they come. And they don't come much bigger than this Melbourne Monolith.

One resident of Australia's second city, Alexander Muscat, was out exploring the suburbs of his hometown after the game released earlier this week, only to discover a terrifyingly tall structure that defies comprehension. Likening the 'impossibly narrow skyscraper' to the Citadel in Valve's dystopian sci-fi shooter Half-Life 2, Alexander dubbed this oddity the Monolith.

In Microsoft Flight Simulator a bizarrely eldritch, impossibly narrow skyscraper pierces the skies of Melbourne's North like a suburban Australian version of Half-Life 2's Citadel, and I am -all for it- pic.twitter.com/6AH4xgIAWg

Predictably, it turns out this artifact doesn't exist. It isn't hidden in plain sight to mortals, wandering around blissfully unaware of the towering obsidian glass pillar, observing our every move in the real world. It was caused by a typo.

Sleuths found out how developers Asobo and their partner Microsoft's world-recreating tools have been duped while finding shortcuts to take instead of rebuilding the planet one building at a time.

Flight Simulator 2020 uses Bing Maps and Microsoft's Azure AI to analyze map data and photogrammetry to create 3D models of buildings, terrain and even trees (more on that in a minute). However, internet detectives found one other source of information that has helped them put together what is, otherwise, quite a stunningly accurate representation of our world: open source wiki sites.

A site called OpenStreetMap is a free, user-maintained map with a LOT of data on top of the usual street layouts. Individual buildings can have metadata added to them, for everything from who owns the building to how many floors it has. You're probably seeing where this enters the story now.

A year ago, "nathanwright120" made an edit to @openstreetmap , adding a tag that indicates that a building in the suburb of Fawkner in Melbourne, Australia, had 212 floors instead of 2. All his other edits of openstreetmap seem legit, so it appears to have been a typo... (1/2) pic.twitter.com/Mwh1LBu3ap

As one internet sleuth, Liamosaur, points out a user on OpenStreetMap accidentally declared that a building in Fawkner, Melbourne (population: 14,023) was the tallest building in the world. At 212 stories, this house in a non-descript Australian residential suburb was 50 stories taller than the Burj Khalifa in Dubai, which already stands at a staggering 828m.

The kilometer-tall Melbourne Monolith was caused by an OpenStreetMap user failing to type the number 2 a year ago. The typo was fixed soon after, but in the short window before it was, Microsoft or Asobo scraped all the data in OpenStreetMap to quickly tell its world-building tools how tall various buildings were.

In its defense, these photogrammetry tools have done an astounding job for most of the world. The French Alps look simply breathtaking to fly through, and most famous landmarks have been recreated faithfully. However there have been a few hilarious exceptions.

I guess this is one for the republicans out there... pic.twitter.com/7UGBcTNKda

The Queen's house in London, Buckingham Palace, has been interpreted as a block of flats in the base version of the game. There is a London Landmarks in-app package that you can purchase, which adds back all the gilt and glamor in all its Regency glory, or you can leave it as it is.

Similarly, the Washington Monument, one of the most famous obelisks in the world, has become a monument to corporate office design instead. There's also a weird blocky building halfway along the Mall, which appears to have been caused by the map interpreting where 7th Street bisects the lawns as some sort of blank cuboid building.

Can't stop laughing at this flight simulator in DC. pic.twitter.com/VeabjsQCaH

It's not just famous landmarks that are being shunned by the cold, steely eyes of our robot overlords either. One of the quirks of the ways Azure AI's photogrammetry processes palm trees is that – it doesn't. Something about their odd shape causes the game engine to render them as curiously shaped blocks of granite, like a statue that hasn't been carved yet. This gives some cities around the world a strange vibe if you fly close enough to the street.

By far my favorite Microsoft Flight Simulator quirk is that it doesn't know how to handle palm trees, so Southern California is full of these terrifying obelisks jutting forth from the pavement like so many teeth. pic.twitter.com/OqkmuSfimn

And the bizarre artifacts don't end there. Thanks to the over-arching reliance on Bing Map data for the overall canvas of all these other rendering mishaps to be painted on, even the ground isn't safe from AI mis-steps. Players over on the Flight Sim subreddit have been finding instances where a plane photobombed a satellite as it was taking pictures of the ground, resulting in these ghostly shadows printed onto the terrain itself.

It's clear that in the ambitious attempt to recreate the world – and we have to stress here that making a seamless game world out of the entire planet is absurdly ambitious – some corners have been shaved off. Luckily they add even more bug-hunting fun to an already incredible experience. That is, if you can get it running at a decent framerate.

How are you enjoying your time flying around? If you're thinking of jumping in to hunt for more glitches and bugs like the Melbourne Monolith, check out the best joysticks for Flight Simulator 2020.