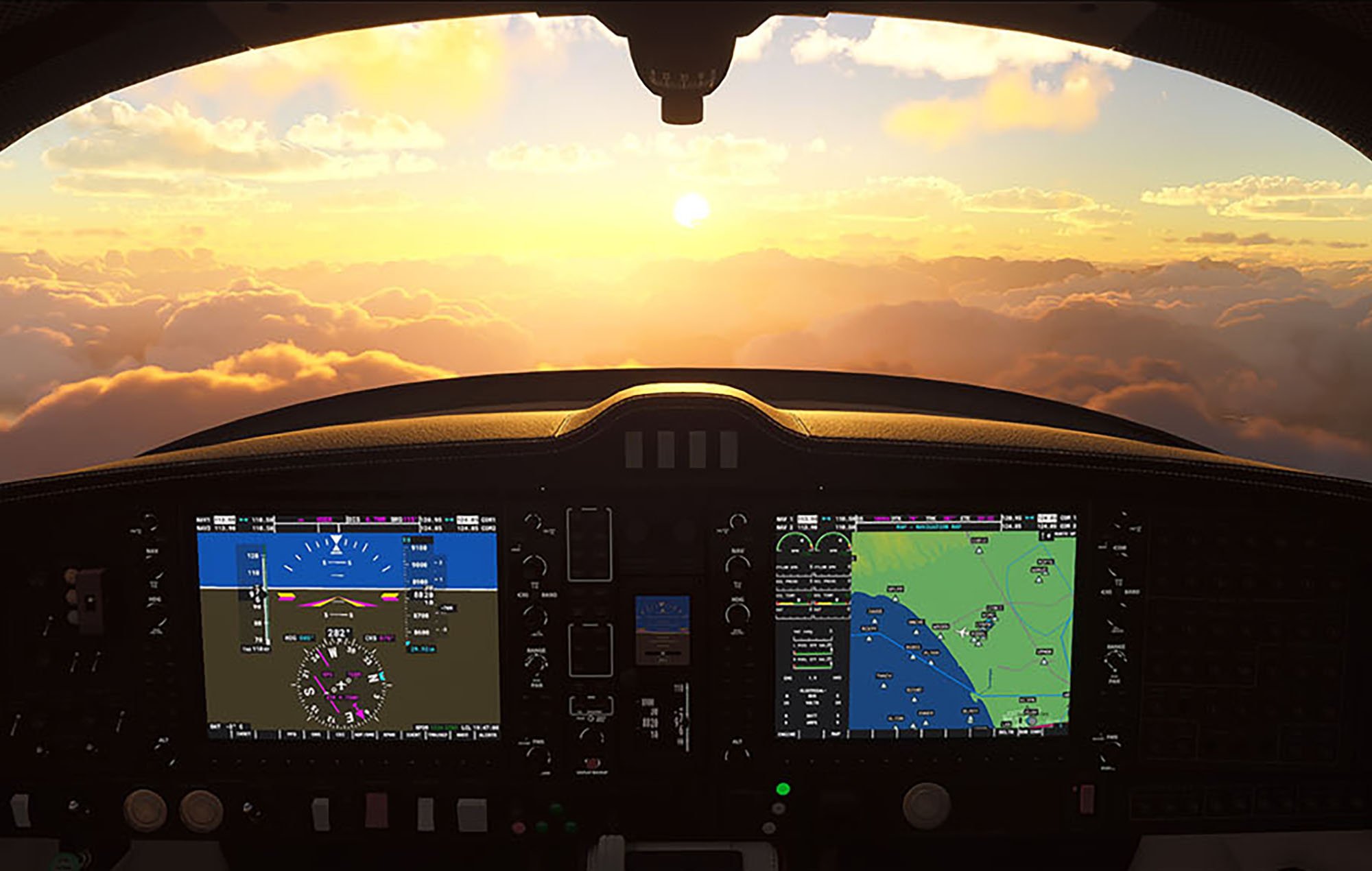 The best joysticks and flight sticks are ready for take-off when Microsoft Flight Simulator 2020 lands this week, and if you're planning on boarding for its release on August 18 then you might also be considering an upgrade to your cabin instrumentation.

There are a number of different flight controllers (at any number of different budgets) for the game, which will release on PC and Xbox One, with a Steam release for those not picking it up through Game Pass on launch day. And given the different platforms, controller types and costs involved it can feel like you're actually attending flight school trying to understand all the options available to you.

So to help you out, we've broken down the best flight sticks into their categories (explaining what each is best for) and offering a spread of price ranges for you to pick the stick for you from. So here are the best joysticks, flight sticks and other peripherals for Flight Simulator 2020.

The best joystick for Flight Simulator 2020 on PC

Joysticks on their own are the best starting point for the amateur sim-pilot. With few bells and whistles you can get a feel for the cockpit and, in some cases, not even break the bank. Here's what we consider to be the best (and the best affordable) joysticks for Flight Simulator 2020.

If you aren't planning on picking Flight Simulator 2020 up on launch, then you might want to wait for this beauty. Modeled on the tiny sidesticks in Airbus's latest A320 cockpits, this single stick provides all-axis control (with a rudder twist-lock), two utility triggers, the POV look hatswitch and two more buttons on the top of the stick (which can be swapped around and customized with extra modules). Then, around the base, there are 12 programmable buttons for all the ILS and flaps and other controls you'll need in regular flight. There's also a small throttle slider to get you started, and if you want to upgrade to a full HOTAS (hands on throttle and stick) setup in the future, there's a separate throttle quadrant you can pick up for it. Given the close relationship Thrustmaster has with Flight Simulator developers, and this being the latest release, there will be considerable support for this stick in the game. However, the Thrustmaster TCA Sidestick Airbus Edition will release later this year, so if you want one right now we suggest...

The best joystick you can get right now: Thrustmaster T16000M FCS

Essentially this is the same basic unit as the TCA Sidestick, though with a slightly older control precision system. The Thrustmaster T16000M FCS button layouts are almost identical, but you can't swap out the top button placements. There is also a throttle unit to turn this into a HOTAS setup as well, if you eventually want to, but unlike the TCA's it doesn't have split throttles for separate engines or afterburners. It's just slightly less authentic than the one modeled on an actual aircraft control system, that's it. A good starter stick and converting to HOTAS gives you more buttons to play with. Can be hard to find in stick-only SKU at the moment, thanks to the mad rush for flight peripherals, so it might be worth diving straight into a HOTAS. Or, if you still want to pinch pennies or dip your toe in first, try our budget pick:

If you don't want to shell out $70 to get going, then for half the price you can pick up the old stalwart of beginner enthusiasts. The design of the Logitech Extreme 3D Pro Precision hasn't changed for over a decade, with a comfortable grip for longhaul flights and six buttons around the base. Unlike some other starter sticks, this one has full axis control, giving you rudder twist as well as pitch and roll. No ready-made options for converting to a HOTAS setup, but good to get started and decide if you want to go all in. It is not flashy, but it is pretty much everything you need if you don't mind the other half of your Cessna cockpit keybinds being on the keyboard in front of you.

The best HOTAS for Flight Simulator 2020 on PC

This is the daddy. The apex predator of flight stick setups. Modeled exactly on the cockpit of an A-10 Warthog tankbuster, this double-handed setup has the comforting feel of cold steel. The Thrustmaster HOTAS Warthog is made entirely of metal, with flight-quality flick switches, adjustable weight and pressure on the stick and throttle and Hall Effect sensors for minutely accurate control input readings. Every single advancement in computer flight stick technology has been thrown into this. However, it isn't without its downsides. Because the A-10C's cockpit controlled its dual tail rudders with pedals, there's no twist axis control in the HOTAS stick. It's that accurate. This isn't a problem if you're planning on picking up the matching TPR Pendular Rudder to complete your cockpit, but if you want a HOTAS solution that stops short of $1,000 then you might want to keep reading.

Pretty much all the same bells and whistles (split-afterburner throttle lever, plenty of chunky flick switches, full-axis stick) but not all-metal. As a result, the Logitech G X56 Rhino is significantly cheaper than the Thrustmaster HOTAS Warthog and still very, very good at its job. You can get an even cheaper version if you opt for a factory-refurbished option on Amazon. Lots of customization options make this the better pick over its smaller brother, the Saitek X52 Pro, which is definitely not to be sniffed at either – and actually might be a better pick if you're not as interested in physical toggle switches. The X52 also has a screen for selecting multiple different programmable configs on the fly, letting you swap between essential functions needed for different phases of flight. If you aren't into that much complexity, then our budget pick is probably the Goldilocks option for you.

Ok, it's not photorealistic, but it is still a well-made HOTAS. From the rest of the picks above it should be quite clear that Thrustmaster know what they're doing. The T.Flight is no exception, and thanks to its wide support for previous titles in the Flight Simulator family, will almost certainly have a preconfigured keybind once Flight Simulator 2020 arrives. Buttons are well placed, with six on the throttle head and a rocker switch for your lesser fingers to use, great for moving between options in a menu with the trigger to select them. The throttle base and joystick assembly can be detached from each other, so you can place them wherever's most comfortable in your setup for those long haul flights.

The best flight stick for Flight Simulator 2020 on Xbox One

Of course, Microsoft Flight Simulator 2020 isn't just on PC, it's also available on Xbox One. However, many peripherals aren't compatible with the console, so you'll need a flight stick that's going to work on Xbox One as well. Luckily (or unluckily) there's really only one option to go for here, so if you want to use a flight stick with Flight Simulator 2020 on Xbox One you're going to want to pick up the Thrustmaster T-Flight HOTAS One. It's a specific variation of the PC's best budget HOTAS, so you get the same detachable full-size throttle and a 5-axis flight stick. The One version also works with PC, in case you ever want to make use of your Game Pass benefits on a Windows 10 gaming PC as well.

The best flight yoke for Flight Simulator 2020 on PC

There are fewer options for flight yokes, which is weird considering almost all civil aviation is flown with these half-steering-wheel-half-joystick things. They're one step further along the simulation enthusiast path to accuracy, eventually reaching the point of no return: building a cockpit in your shed. If you're not quite ready to go that far, the Honeycomb Aeronautical Alpha Flight Controls is a great yoke with plenty of flick switches on the dash. There are others, including simulator veterans CH Products' Flight Sim Yoke, which has most of the same controls but without some of the attention to detail. Then, if you want to take one step further along that path...

The best full cockpit controller for Flight Simulator 2020 on PC

This is a tentative recommendation, but it's the best option right now. While you can start off with just a yoke, the Logitech Saitek Pro range also offers a number of instrument panels and switch banks for you to upgrade your setup over the years until it's 2025 and you're surrounded by peripherals and you've been flying transatlantic redeyes in real-time all night with a pot of coffee next to you. The full range includes instrument, radio, switch and multi panels to give you pretty much every possible mid-flight control without having to touch your keyboard.

However owners of the more complex Logitech G Saitek Pro Flight modules report they are currently non-functioning in Flight Simulator 2020. Many in the sim community have begun requesting support and patches for these units, but as of right now the components of this range that are functioning are the Yoke, Throttle Quadrant and Multi Panel. There are workarounds using Lorby's "AxisAndOhs" app to manually assign inputs and supports up to three Flight Information Panels.

Right now there has been no word from Asobo, Microsoft or Logitech about incoming support patches for the full Logitech G Saitek Pro Flight range of panels to be added. However mod and community support could expand on Lorby's early work to get everything going if there's no native solution soon.

Of course, there are even more complex flight simulator setups out there, so if you want to alert us to your particular simulation controller, let us know in the comments. We hope from this you can find the best joystick, HOTAS, flight stick or yoke controller for Flight Simulator 2020 and take to the skies in style.

We may include affiliate links to Amazon in order to direct you to where to buy these sticks, though you can of course check to see if they're cheaper elsewhere. Any purchases made through these links may directly help fund our content. Happy flying!