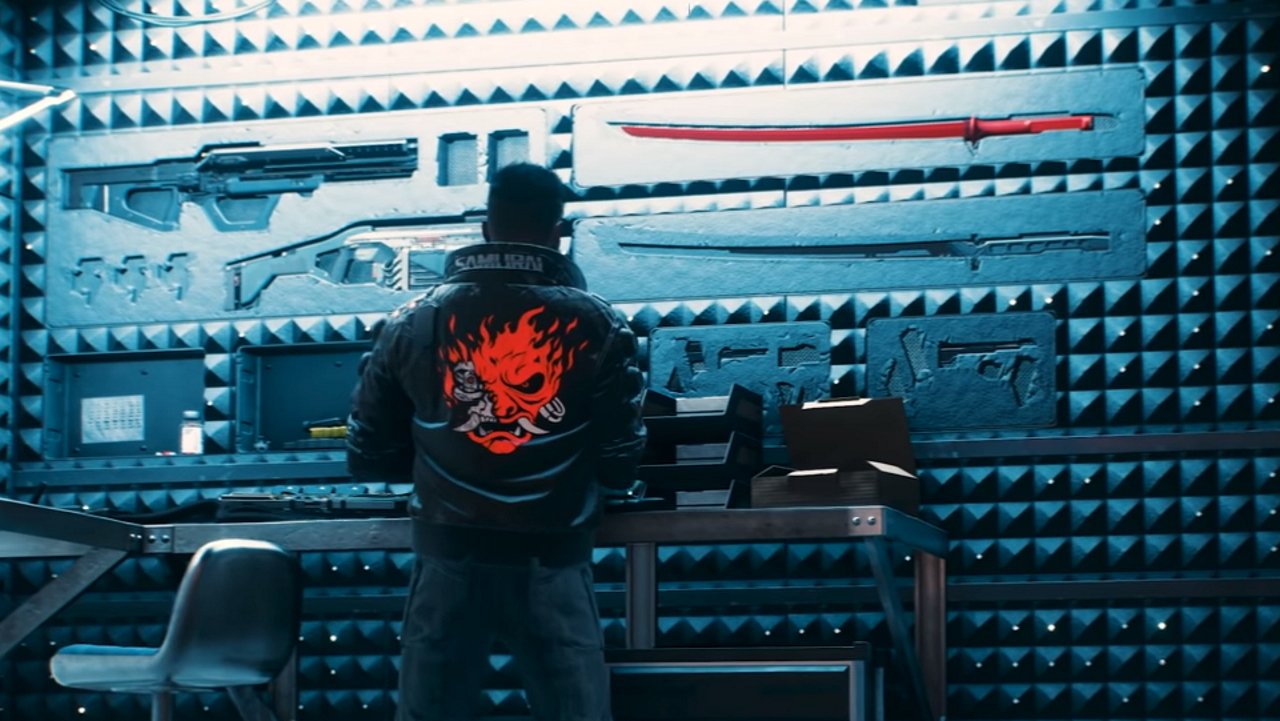 Yesterday, developer CD Projekt Red gave us another extended look at Cyberpunk 2077 in Night City Wire: Episode 2.Along with details on the life path origin stories, we got a look at plenty of guns as well. We now know that Cyberpunk 2077’s weapons come in four main categories: Tech, Power, Smart, and Melee. Below, we’ve collected the information we know so far on all the guns, swords and stabby things shown so far. If you want an idea of the toys you’ll get to play with in Night City, read on for our list of all weapons in Cyberpunk 2077 that we’ve been shown so far.

We’ve split our weapons into the core categories listed by CD Projekt Red, but it’s worth mentioning a few extra details first. Because Cyberpunk is an RPG, you’ll grow more skilled with guns over time, improving reload speed, stability and more. There are also different rarities of gun types, ranging all the way up to Legendary weapons which come with unique attributes. Exploration will be key to finding the best gear.

In our list of all weapons in Cyberpunk 2077, we’ve included any details we know about each weapon, and also included a few unnamed weapons that were given a very brief showcase during the Nighty City episode. Bear in mind that some weapons may change before the launch of the game. We'd also like to credit VG247's excellent interview (read it here) which divulged some more information a few other weapons we'll be able to use.

For the tinkerers of the future world, Tech weapons are where it’s at. These unconventional guns use electromagnetic equipment to hurl chunky projectiles extremely quickly. This means they’re perfect for firing through cover or, y’know, another person. Whichever makes for the quickest path to your target.

An electric, double-barrelled shotgun. Fires slowly and ejects after each shot, but packs a serious punch.

A semi-auto sniper rifle which can be charged up to fire a penetrating blast.

This weapon appears to fire a compact, shotgun-style blast, but with a faster rate of fire than the Satara.

We’re not sure if this image is actually the RT-46, but it looks pretty close to a powerful, charge-shot pistol.

Power weapons will be the closest to your standard video game weapons, forgoing fancy tricks in favor of the classic tactic of putting lots of bullets into your enemies. Expect your usual mix of rifles and shotguns, but with the added bonus of ricochet bullets that can be bounced off walls to hit hiding enemies. You’ll see a line tracing the ricochet path when you aim, letting you pick off cowardly foes.

Appears to be a traditional assault rifle.

It’s your pump-action shotgun. Was there ever any doubt there would be one of these?

We also get a look at a sawn-off style double-barrel shotgun in the Nighty City footage.

Named after the famous Japanese swordsmith. We get a short glimpse of the reload animation for this rifle which comes with a handy scope on top.

There’s a brief flash of another gun shown in the breakdown, which we believe to be the DT-9 LMG. it has a heavy, slow rate of fire, and comes with a tripod on the front that you can presumably place in order to increase stability.

A 9mm pistol that can swap between single shots and full auto.

These compact weapons appear to all have some form of homing aim-assist built in. You’ll need to achieve a Smart Link with your target before you can home in on them effectively, but there'll be nowhere to hide once you're locked on.

This looks like a one-handed, homing shotgun. Fires a bunch of pellets which float in the air before zooming towards a target.

A compact, burst-fire pistol with homing bullets. As with most Smart weapons, once locked, the weapon can be fired away from the target to get bullets to curve around walls and barriers.

A small SMG-style weapon with a multiple fire modes, a flash suppressor and a quickly reloadable magazine.

Another smart shotgun, the Zhuo has eight barrels, allowing it to track eight targets independently. Don't mess with this one.

Unfortunately we don’t know the full name of this weapon, as it was cut off on the side of the trailer.

Only a short clip of this weapon pops up, but it appears to be a rifle of some kind.

Locks on to your targets head, to save you all that trouble of lining up a long shot.

Details unknown. Given the name, we're gonna hazard a guess that it stuns people.

It’s a bat with spikes on it. What more do you want?

Okay maybe this is the more you want. A katana with a nano-filament-heated blade edge. Hot and sharp enough to cut limbs clean off

Prefer to hit hard? Grab a sledgehammer to pummel your foes

Likely the tool of an assassin, the Tanto is a shorter (though still pretty sizable) blade used for killing armored enemies up close.

In addition to traditional weapons, you’ll be able to modify your body to include various augmented weapons. Here’s the list of the ones we know so far:

Mantis Blades will let you chop foes up, while Gorilla Arms will give you the strength to pick up heavy tech and weapons. The Projectile Launch system describes itself as “a missile launcher in the palm of your hand,” so that’s pretty neat too. We don’t know what the Monowire is used for, but it could be for more stealthy approaches like garroting enemies. We weren’t able to grab the name, but we could see what looked like an armor-based Cyberware as well.

Those are all the weapons from Cyberpunk 2077 that we’ve seen so far. We’ve no doubt CD Projekt Red has plenty more waiting for us in the game, and we’ll do our best to update this list as we’re shown more, closer to release. For more Cyberpunk 2077 news, guides and features, click here to visit our hub page for the game. Cyberpunk 2077 releases November 19.