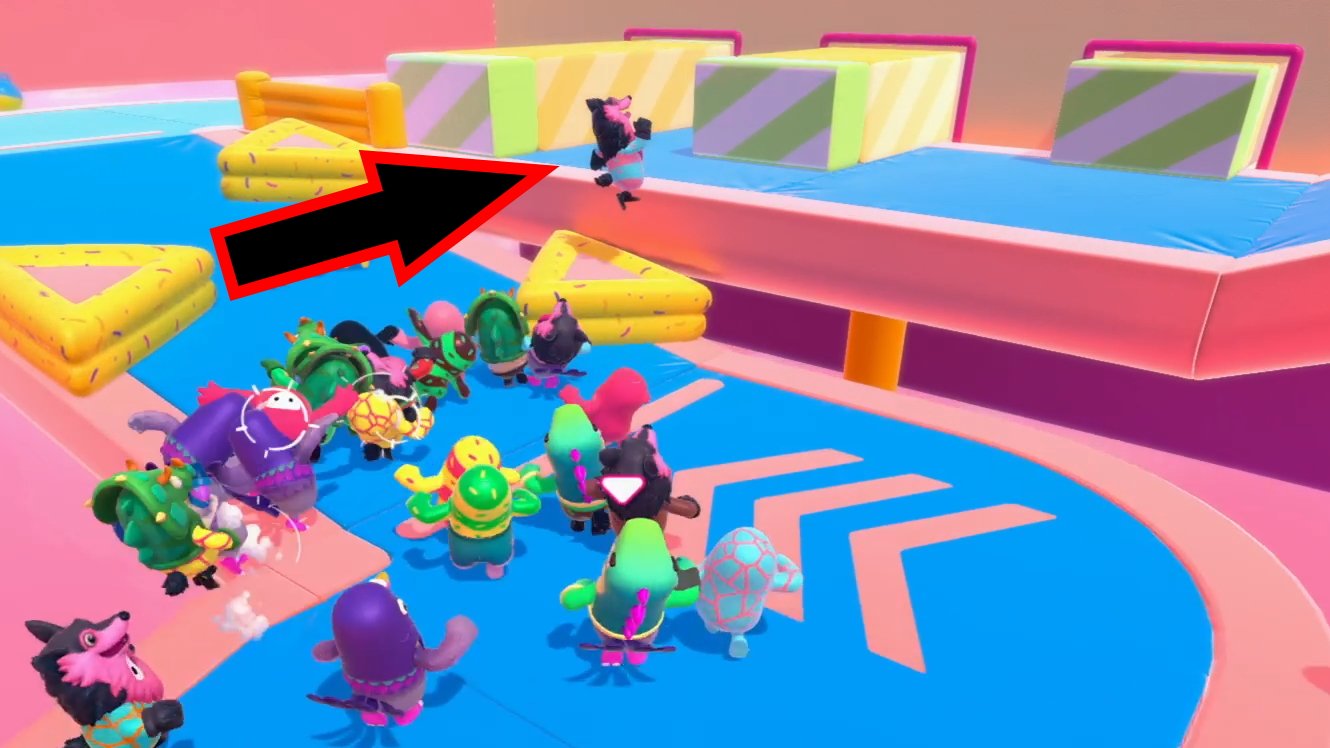 Fall Guys: Ultimate Knockout is a pretty chaotic affair, with a heavy emphasis on (often hilarious) moments of luck to get you ahead. That said, there are definitely some tactics for Fall Guys which will see you tilt the odds (and seesaws) in your favor. Want to step up your obstacle course skills? Read our collection of Fall Guys tips and tricks guide below and start claiming those crowns.

Diving (tapping Square in mid-air) is slower than straight up running in most cases, but it can help in a couple places. Jumping from a big height or up onto a spinning platform can cause your Fall Guy to tumble over. However, if you perform a dive and land on your face, your Fall Guy will get up again quickly. This is especially useful on the opening leap of Fruit Chute, or the end spinning platforms of Dizzy Heights.

Dive over the line

If you’re reaching the finish line and are close to being eliminated, a jump and dive can give you the tiniest burst of speed to cross the line before other players. You have to make sure you don’t touch the floor, as landing from a dive is very slow.

When you’re in a throng of players, the temptation is to jump and jump some more to escape the chaos. However, Fall Guys are temperamental little beans, easily knocked off their feet. Jumping can see you bounce to the front of the pack, but more often than not you’ll end up knocked sideways, landing awkwardly at the back of the pack as you stand back up. Ideally, jump only when necessary on the level and you’ll find you make your way forward much faster. A very important skill to learn on the Door Dash level.

Watch out for hidden gaps

Several of the race levels such as Dizzy Heights include gaps hidden just beyond ramps or drops. Learn their locations so you don't fall out!

Seesaw: Don’t jump down if you can avoid it

We don’t mean avoid the seesaws altogether, that’d just be silly. But if a seesaw in front of you is tilted down, you should run and drop straight off the platform onto it, rather than jumping. This will stop you from falling so fast and bouncing awkwardly off the platform. It’s natural to want to jump, but you’ll easily make it just by dropping off when the seesaw is below you.Try to only jump when alighting from the seesaws if you can.

Whirlygig: Get past that central fan

One of the best secret tips in Fall Guys is a way to consistently get past the large central fan at the end of the Whirlygig level. Instead of running headlong at it, stick to the far left of the ramp and dive onto the floor as you approach. This will lower your body, meaning that the majority of the time, the fan will pass over you or only give you a small nudge. It takes some practice, but is a huge timesaver when you get there.

Dizzy Heights: Go with the flow

It might seem obvious, but on the spinning platforms, you should always go with the flow of the platform. Even if there’s a shorter route going against the rotation, it’s almost always faster to simply spin round, running with the rotation to get where you need to.

Fruit Chute: Stick to the left

Fruit Chute is one of the most luck-based levels you can face, but we’ve found that running up the left side of the belt is by far the best path. Far less fruit tends to reach this area, and the deadly central logs won’t challenge you. Dive onto the left side of the initial platform, and stick to it as you make your way up. Make sure you stay left even when off the belt, as logs can still take you out at the end!

Grabbing a tail typically leads to a frenzied panic of dashing around the map, but you can get away with being quite sneaky here too. Stand in the corner of the map and face away from the wall, and it’s very hard to see that you even have a tail. Looking at someone face on, you can’t see their tail, so if you shove yourself in a corner, most players will overlook you as they hunt for the more visible tails elsewhere. You will need to move any time someone gets in close, mind.

Slime Climb: Take your time (and the shortcuts)

Slime Climb is the most notorious level in Fall Guys. The player count destroyer that’s legitimately left us in a final of just two people. There’s no avoiding that this is a seriously tough level, but there are some tricks to it. We have a full guide you can read here, but there are some quick tips below too.

At the opening corner, you can skip the entire first ramp by jumping on top of the first bouncy pad against the wall, launching you to the upper level ahead of the pack.

When you reach the deadly yellow beams that have claimed a thousand Fall Guy lives, you should take the chance to slow down. You don’t need to jump onto the first beam, so walk on to the center carefully. Then line up your jump onto the second and do it slowly. This can be tough in a busy group, but it pays to be careful here rather than rush carelessly.

Finally, watch out for players waiting at the end of the final slime run. It’s become a bit of a joke online for players to wait and the end of slime Climb, grabbing players as they’re about to leave the slippery slope and forcing them to fly off the level. If you see someone waiting, slow down near the end, then jump and dive over them to get past. If you’re grabbed, do not mash jump or wiggle the controller or you’ll be sent flying.

Fall Ball: Stick to the middle

Don’t get caught up in the attack. Most important in Fall Ball is the defense, so either stay back on the defensive line, or stick to the halfway line. When a goal is scored, if you’re on the halfway line, you can jump and header the new ball which spawns, hitting it directly into the goal (as shown here on Reddit). Through this method you can rack up big points while everyone else farts around with the other ball in a corner.

Hexagone: Hop to it

Start by running across platforms, attempting to carve out a space for you and you alone. If you manage to get yourself alone on a level, you need to start jumping. Slowly jump between each remaining block on your level, and you can make a platform last far, far longer than normal. Keep your cool and it’s actually pretty simple. If you need to jump a gap that’s two spaces wide, you can do that with a dive. When you get into a rhythm, start looking at remaining platforms on the levels below. You’ll need to drop eventually, so plan where you fall to, and use a dive to readjust mid-fall if needed.

Never be on Yellow Team

Finally, and far less seriously, pray that you’re not put onto the yellow team. Poor, maligned yellow team. There’s a running joke online that Fall Guys’ yellow team is always the losing side in Team Events, and being consigned to them is as good as losing from the off. But maybe you, a great hero and champion of the beanfolk, can finally turn things around? Probably not though. We’re sorry, yellows.

Those are all the tips and tricks we have for Fall Guys: Ultimate Knockout! Naturally there’s still a lot of luck involved, but following the advice ahead will help you qualify more often than not. Have any other secret bits of advice that help you get ahead? Share them in the comments below! Otherwise, head to our game hub page for more news, features and guides.