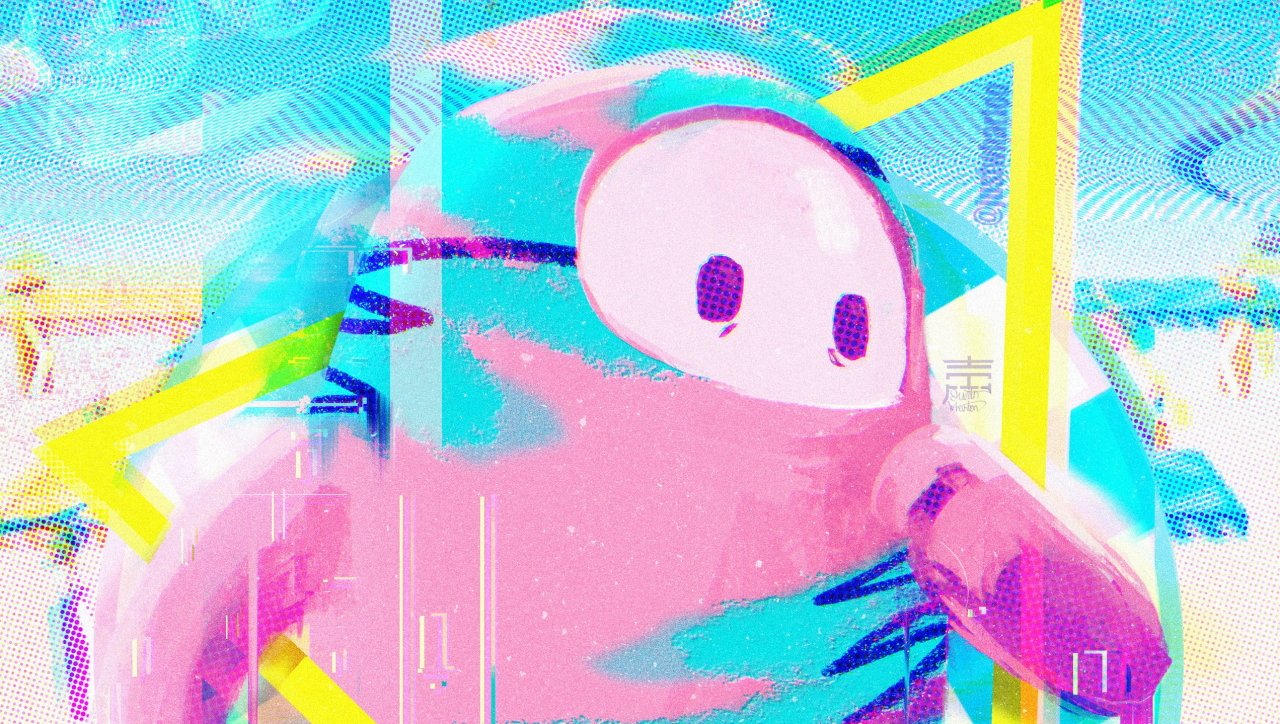 Fan Art Corner is a space in which we want to highlight the phenomenal artwork, creations and tributes that the people and communities around our favorite hobby share online. Jumping from one competitive arena to another, we’re tumbling away from last week’s Valorant feature to land unceremoniously in the vibrant, bean-filled obstacle courses of Fall Guys.

Jelly beans are delicious. Everyone knows it, especially the developers of Fall Guys: Ultimate Knockout. Each time we play, the bright, colorful characters end up making us hungry, resulting in a swift trip to the candy stash. But while Mediatonic’s cheery battle royale only inspires our stomachs to rumbling, others have found it a much more productive (and far less weight impactful) inspiration.

Despite only arriving on PS4 and Steam this week, the web has already been flooded with adorable, hilarious and beautiful pieces of fan art for Fall Guys. Who would have thought jelly bean people could rouse such creative talent? We’ve rounded up some of our favorite pieces of Fall Guys fan art for you to enjoy below. If you like any of the images, be sure to check out the artists behind them!

The appeal of Fall Guys is hard to define, but the sheer joy of its combined visuals and gameplay has led to a rich selection of energetic styles. Our favorite by far has to be Justin Wharton’s vaporwave design. We love Fall Guys’ soundtrack, but after seeing this we’ve gotta ask: could we get a vaporwave version and visual filter as well? Pretty please?

There’s plenty of slapstick humor in Fall Guys, but perhaps after one too many rounds being bumped off levels by another player, graphic design artist Vilma Matilda Virtanen is pretty sure the game is harboring a dark undercurrent of violence.

My experience do far @FallGuysGame pic.twitter.com/t4ruF5goQo

As well as producing the image under the header above, freelance artist Kalin put together the following piece to share their excitement before dropping into the game for the first time.

We dropping hot soon!!! Some fanart from me before we go live. @FallGuysGame pic.twitter.com/ZxyD1laBp3

Fall Guys' jelly bean figures are so inoffensive that studios and artists haven't been able to resist showing them in crossover pieces with some of their other favorite titles. Below, 3D modellers Twice The Slice combined Fall Guys with Toge Production’s Necronator, while motion designer Holly meshed the worlds of Outcasters with Fall Guys to celebrate the game’s launch.

That damn Chubat stole the crown and the Fall Guys want it back!

My household is half MediaTonic/half Splash Damage employees so I'm sure you can imagine when i say it's been an exciting few weeks!!

Until the very end, you’ll never see just one Fall Guy, so it’s only fair that OxdoodleClub co-founder Mat Roff took the time to depict a whole horde of them in this cute piece.

Thank you to everyone who came over to watch me draw 10 of these little @FallGuysGame dudes last Sunday and tonight!

Big thank you to all the @Mediatonic crew who swung by and joined us in chat, and best of luck with the launch next week!

If you’ve fallen head over heels for Fall Guys then you’re far from alone. But if there’s a special someone in your life that’d you’d like to share your crowns with, why not send them this Fall Guys Valentine’s-style card, courtesy of artist Sian!

Yaaaaaas. I'm addicted to Fall Guys so it was only right I did this  #fallguys #art #artwork #illustration #artprint #kawaii pic.twitter.com/6lZv9rfwKZ

And finally, ever wondered what a Fall Guy’s skeleton looks like? No, we hadn’t either, but now we’ve suffered seeing one thanks to artist Mikey, so you have to as well. Enjoy:

Okay, that’s quite enough falling for now! If you’ve found any other great pieces of Fall Guys fan art then please share them with us in the comments below! If you’d like to check out previous editions of Fan Art Corner, all you need to do is click here.