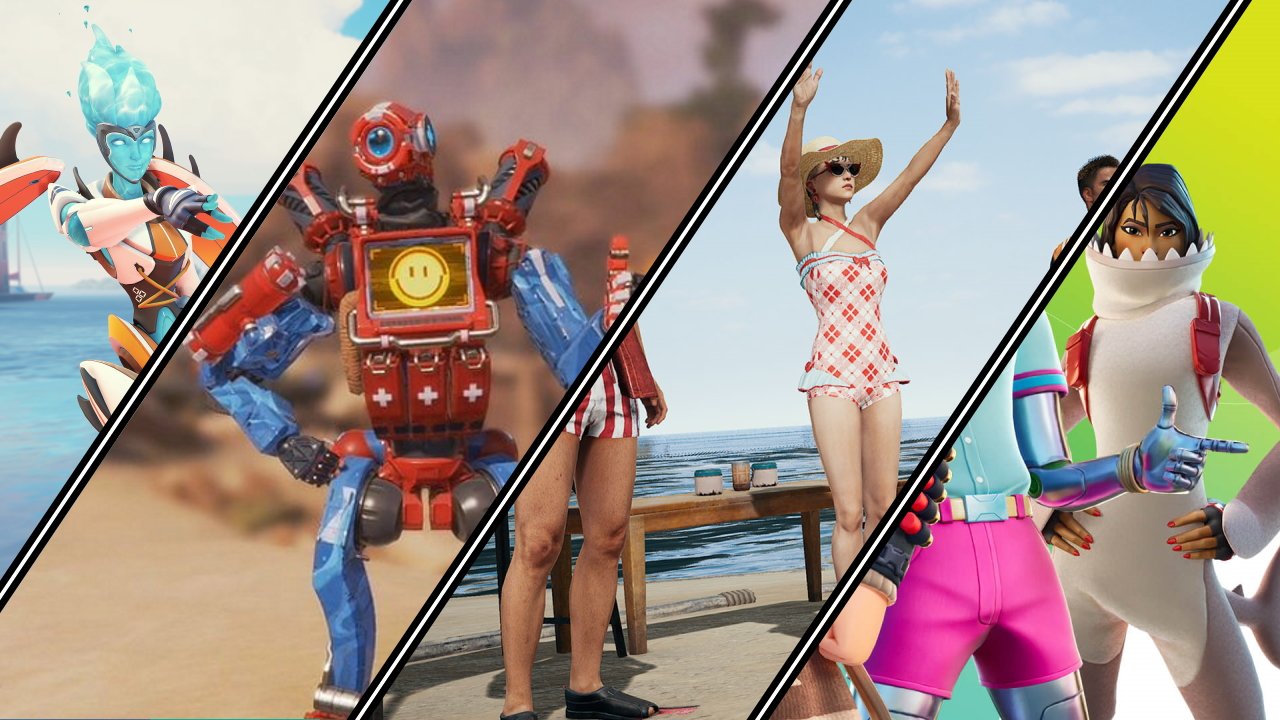 The guns are always out in video game land, so when the sun’s out, it’s time to get some skins out instead! That yellow orb is once again high in the sky, spreading summery vibes across the northern hemisphere. There are far too many quality video games for us to go and enjoy it in the real world of course, but that doesn’t mean we can’t celebrate vacation season in virtual style.

To that end, we’ve decided to host a video game summer skins catwalk! Rounding up all the latest video game fashion, we’ll take a look at the seasonal skins you can dress your virtual avatar in to let them make the most of the year’s warmer months. And look, here comes the first contender down the runway!

Early out onto the catwalk it’s the previous champion of the Battle Royale crown, PUBG! Normally preferring to eschew modern fashion trends in favor of their beloved black trenchcoat, this year has seen a – ahem – royale change is attitude. Always open to prefer the classic way of doing things, PUBG is sporting a distinctly vintage feel with its checkered swimsuit and fern shirts. A great pairing for those planning to don rose-tinted glasses this summer.

And would you look at that, if it isn’t the one to steal PUBG’s crown in the first place. As ever, Fornite is bringing its bold and bright styles to the summer season. Attempting to cover all potential money-making bases, Fortnite’s selection includes golfing and safari outfits, as well as an odd interest in fast food and a shark suit we can only imagine would prove sweltering under the summer sun. It’s an eclectic mix, but we can’t fault their enthusiasm.

And rounding out the Battle Royale parade, it’s none other than Apex Legends! Never one to forget the metallic friends in our life, this year sees the perennially cheery Pathfinder doused in a slick new paint job. The red and blue Swimming Buddy skin is only available through Twitch Prime membership, but if you’re the type who likes the swing in and save your fleshbag buddies from disaster, you won’t want to miss it.

Never one to miss a shot at fresh fashion, Overwatch has held onto its summer wardrobe until midway through the season. But they’ve come out of the gates running this year and are flexing on the catwalk with a sporty mix for their yearly Summer Games event. Featuring lifeguard outfits, karate gis and surfboard wings, Overwatch’s summer skins will demand you work up a sweat, as they’re only available until August 25.

Hang on, is that – yes, it really does appear to be an entire house trundling down the catwalk! A controversial choice from a new contender this year, Animal Crossing: New Horizons has forgone fashion show staples, instead opting to show off a variety of shell and mermaid themed decorations and ornaments for your home. Summer shells can only be grabbed until the end of August, so get on those beaches and start collecting! It’s hot out there, so be sure to wear a fashionable leaf-print wetsuit as well so you can dive for scallops and collect mermaid items as well.

And that concludes our summer skins catwalk! There were plenty of great contenders this year, though we suspect Animal Crossing: New Horizons may be due a disqualification for submitting an entire abode. Our personal favorites this year have to be Overwatch’s collection, most notably Echo’s surfboard wings; inspired! Let us know your favorite summer skins, or any games that we’ve missed from the catwalk, down in the comments section below!