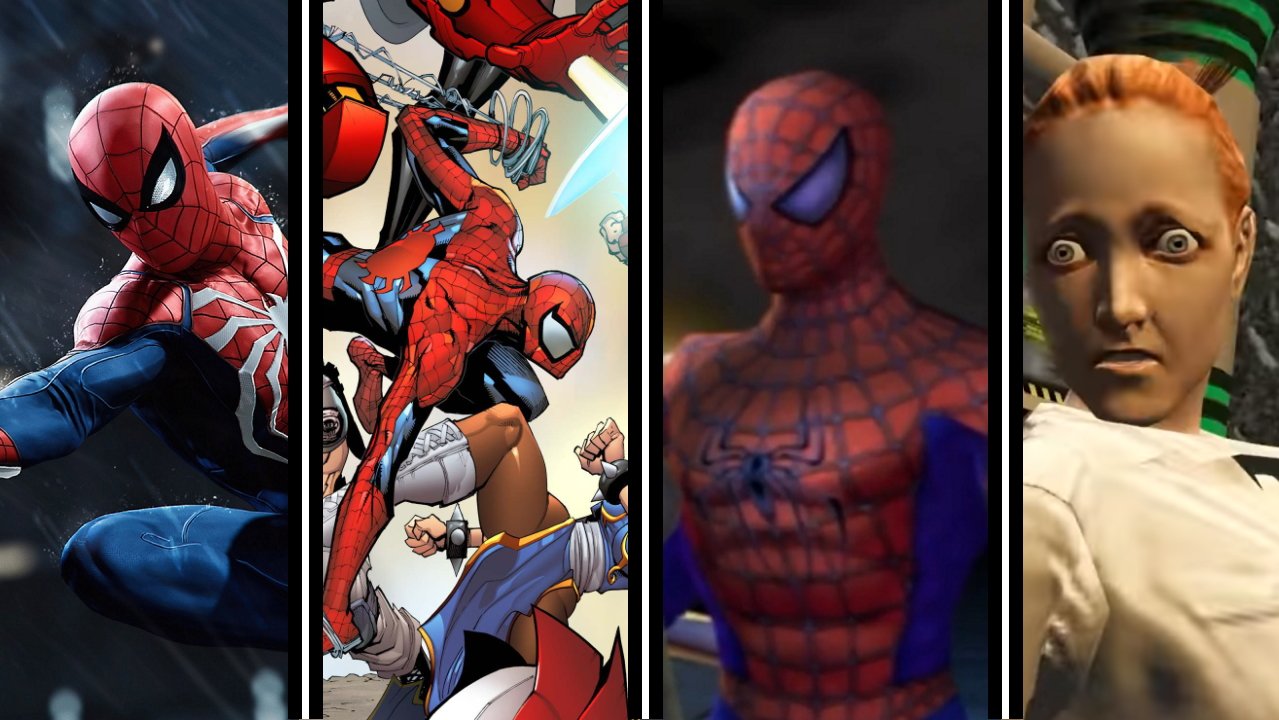 Ugh, what the heck is this sticky mess doing everywhere? Oh, no, you left the window open again, didn’t you? It’s almost Spider-Man day again, and you know how excited real world spiders get this time of year! Listen spiders, we get it, Spider-Man is pretty cool! In fact, he’s no stranger to our favorite hobby.

Despite his current popularity on the silver screen, the arachnid comic book champ has made his home in far more games than movies over the years, though sadly, quantity doesn’t always equal quality. Tell you what, we’ll forget about the cobwebs for now if you’ll indulge us in a spot of reminiscing. Join us as we celebrate Spider-Man day with a look back over the very best and worst Spider-Man appearances in video game history, be it games, cameos, or even fan-made mods.

We couldn’t really kick this list off anywhere other than Marvel’s Spider-Man. Prior to 2018, our wall-climbing hero was mired in a sticky web of mediocre releases, and we weren’t far from considering his days a video game star over. But the instant we leapt out of that window for the first time and began swinging through Manhattan, everything changed.

You know that moment in all the Spider-Man movies where the hero first learns to swing? No video game has so perfectly captured the sheer joy of looping your way between towering city blocks. If Marvel’s Spider-Man had nailed only that, it still would have been a decent game. Yet on top of that we got one of the best-acted superhero games ever, and a complex, challenging combat system to boot. All we can say is bring on Miles Morales!

The original king. Long before they became part of Activision’s churning watermill of Call of Duty releases, developer Treyarch was responsible for creating one of the best Spidey games on the market. Released alongside the second of Sam Raimi’s films in 2004, the game’s story perfectly mirrored the movie’s plot, but it was the open world that really won players over.

It may not look impressive by modern standards, but few games of the time provided such a large open playground, let alone tear around it at such pace. Spider-Man 2 was a blast to spend time in, and it stood as a benchmark for superhero games for more than a decade.

Until its untimely death after the disappointing release of Infinite, the Marvel vs Capcom series was one of the most prestigious fighting games around. One of the star showings of early EVOs, it mashed together two incredibly popular worlds long before gaming crossovers were in vogue. It even had the audacity to be brilliant, while at it (yes we are judging you Mario and Sonic).

Spidey has been a staple of the series since before the Marvel crew even mixed with Street Fighter’s world warriors. His quick wit and web combos are almost synonymous with the series, and he also served as a great entry point for those less aware of the comic universe’s less well known heroes and villains.

Now listen, they don’t ever directly state it, but the stars of Tony Hawk games are clearly superhuman. You show us a real-life skater who can flip 90 degrees in an instant, converting their vertical momentum of a half pipe into a full-speed grind. As our three-times-broken legs can confirm, it simply can’t be done.

To that end, it wasn’t all that surprising when Spider-Man made his entry as a secret character in Tony Hawk’s Pro Skater 2. The series has since featured quite the roster of weird and wacky characters, including other Marvel faces such as Wolverine and Iron Man. Yet of all the super-human additions, Spidey is the only one you could actually imagine joining in with skating competition. Any chance we could have him back when the Tony Hawk’s Pro Skater 1+2 remaster arrives?

If there’s one achievement that Spider-Man 3 can proudly claim, it’s that at least it wasn’t as bad as the movie. Still, if that’s the trophy you choose to place in your cabinet, then you know something went very wrong in your life. Clogged full of dreadful quicktime events, the disappointment of Spider-Man 3 was only exacerbated by the fantastic title that had preceded it. Still, at least it provided us with this phenomenal moment of comedic genius.

Forcing Spider-Man to team up with all his greatest foes to tackle an unknown villain. What a great concept! Aaaaaand what dreadful execution. What could have been a really cool game ended up little more than a rote beat-’em-up with no fun, flavor or challenge. And the lead player could only ever be Spidey! You can’t promise a full treasure trove of allied villains and then only let our friends or siblings get to wreak havoc as Rhino or Venom. Shameful.

Skyderim (a.k.a. the stuff of nightmares)

And so we reach the foul-webbed depths of virtual Spider-Man hell. A realm in which only the jankiest, most broken superheroes dare to tread. Or, er, web sling. Our vote for the absolute worst time spidey has ever stepped into video games isn’t even an official release. Oh no, for this level of repugnance we need to reach into the putrid, squelching bag of Skyrim mods. Behold, Spider-Man’s appearance in the Elder Scrolls:

We can only assume that the mod’s creator, driven by a noble heart, wanted to help out Skyrim players suffering from arachnophobia. And what better way to make these overgrown eight-legged beasts less terrifying than to replace them with everyone’s friendly, neighborhood Spider-Man? Unfortunately, as one look at, well, that, will tell you, it somewhat backfired and created a foe capable of sending shivers down even the most stoic of Dragonborn spines. But hey, here’s to egality at least.

Know a brilliant (or god-awful) Spider-Man appearance that we missed? Share it with us in the comments below! We promise not to bite. Well, not a radioactive one at least.