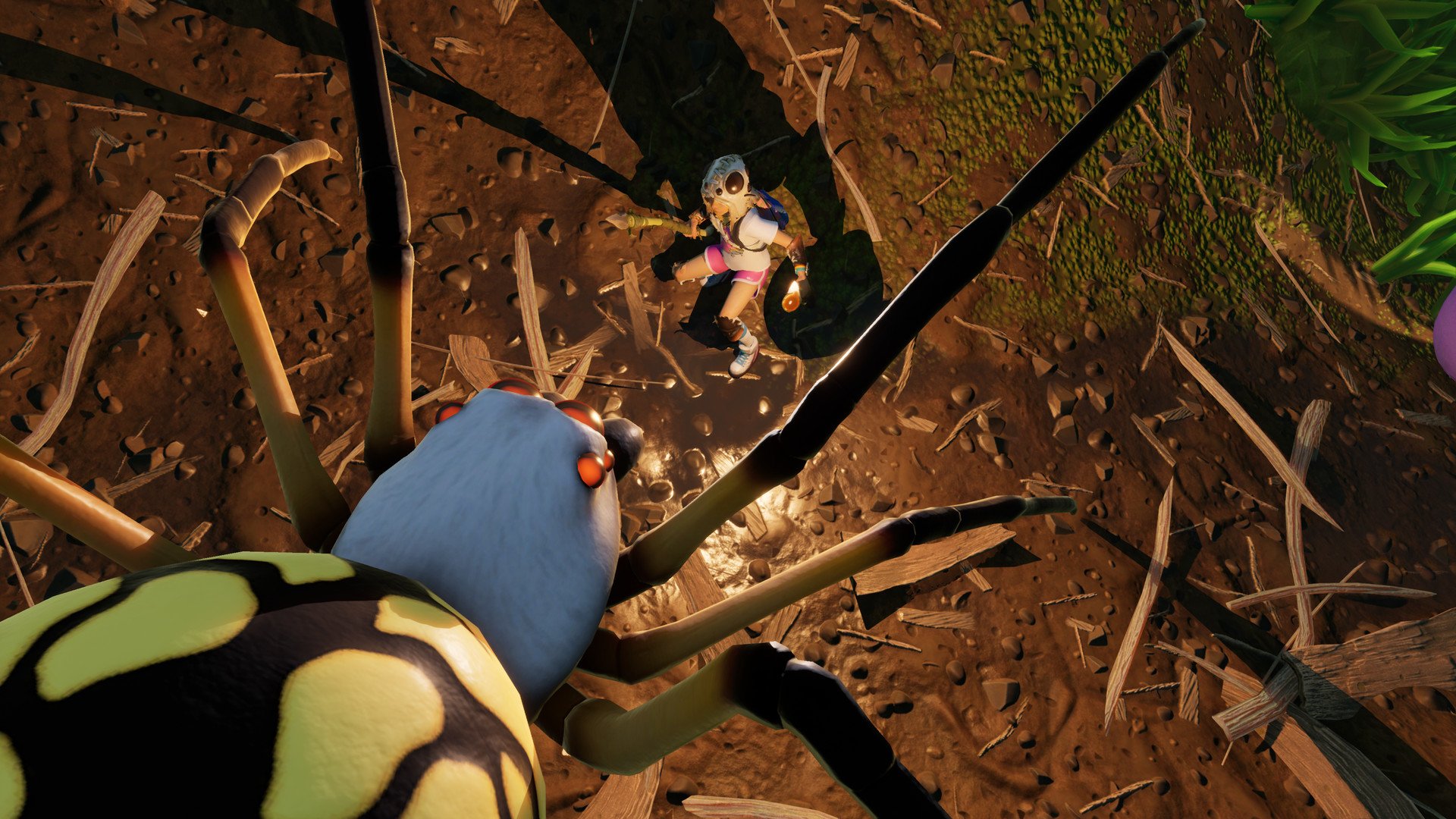 Obsidian Entertainment have closed out the current console generation with some major (and minor) moves. Chief among them is their 2018 acquisition by Microsoft to work exclusively on the Xbox and PC platforms, a move that has given them the funding and space to work on a number of games big and small.

From the recently announced Avowed, promising a grand fantasy adventure through first-person RPG reminiscent of Bethesda’s Elder Scrolls games, to smaller self-contained projects like The Outer Worlds, their fresh take on Bethesda’s other first-person RPG, which they’re well-acquainted with. Despite the publisher and developer’s former collaboration in Fallout: New Vegas, Obsidian proved they still had plenty of ideas left in the tank for a retro-futuristic satirical space shooter.

But smallest of all is their most original project, today’s Early Access arrival of Grounded on Xbox One and PC. It’s not just the size of your character, shrunk down to insect-height and cast off into the wilds of a suburban backyard. The team on Grounded is also appropriately tiny, contending with the gigantic ants of the survival genre.

“The team has been around 14 developers during the majority of the development time,” Obsidian’s senior programmer on Grounded, Roby Atadero, told us. Atadero has been with the Irvine, California studio since 2011, working on major projects like Pillars of Eternity and South Park: The Stick of Truth. But with just a dozen of his fellow developers, he’s out to prove size isn’t everything when it comes to making fun experiences.

“The idea of the game came from a brainstorming session about: ‘If we did a survival game, what kinds of settings or worlds could we do it in?’” Atadero said. “A handful of ideas were brought up, but the idea of ‘What if players were shrunk down to the size of an ant in a giant backyard’ was so unique and interesting that we just couldn't say no to it. The team was so passionate about exploring this idea that Feargus [Urquhart, Obsidian CEO] gave our team the green light.”

If, while watching videos and trailers of Grounded, it seems like a familiar premise to you, then you just have excellent taste in movies. Joe Johnston’s 1989 family comedy classic Honey, I Shrunk The Kids tells the tall tale of a gang of kids accidentally reduced to inch-high heights by mad dad Rick Moranis’ experimental shrink ray. What follows for the next 80+ thrilling minutes is a quest – through various impressively detailed backlots and visual effects replicating the hidden tangled world beneath the grass – to regain their usual stature.

Grounded has a similar set-up, though adds an extra dimension to the adventure with base-building and tools that let you explore areas above ground level, too.

“Most survival games are known for being sandboxes that players endlessly exist and play in,” Atadero said. “While you can 100% play the Grounded this way, we wanted to include a story that players can progress with a definite end goal of ‘Get big again’. There will always be an obvious next objective for players to be able to push the story forward.”

Those objectives take players through a number of different areas, or biomes, which introduce new gameplay elements. The Hedge biome adds more verticality, and dandelion seeds can be used to traverse deadly 3-foot drops by helping you glide across gaps among the branches. But with every new ecosystem you visit in the backyard, you’ll also find new residents calling it home, and this is where the game really comes alive. Stinkbugs, ants, beetles, spiders, everything you could find if you went outside right now and lay face down in the garden. And with all that variety comes new ways to play with this hidden world.

“Each insect has certain wants and desires that it acts upon that drive their unique behavior,” Atadero explained. “Some of these behaviors you can interact with in interesting ways as a player. For example, when ladybugs get hungry, they hunt aphids which are a major food resource for the player as well. Thus, if the player decides to kill all the aphids in some area, then the ladybugs will have to migrate elsewhere for food and that can start disturbing the ecosystems of those areas as well.”

Your interaction with insects won’t always have to be antagonistic, either – though if you run into a spider four times as tall as you out in the wild there’s very little chance it wants to sit down to a cup of tea. With the game in Xbox’s Game Preview program, there are plans for the diminutive team to add new interactions, too. “Taming insects is something that we know players are interested in so it's definitely something on our road map,” Atadero said.

Until you can recruit an army of ants to help deal with the insect menace, there are a number of tools you can craft and upgraded materials for strengthening your base against attack. Even though future science tech got you into this mess, you’re more likely to be using primitive tools to fend off these invasive insects.

“This is still something we are feeling out in how advanced we want things to get in the future,” Atadero said. “We definitely want the player to gain access to bigger and better things but still keep that feeling that you are a person surviving in a backyard and have to use the environment and insects in creative ways to tech up without just saying ‘everything is made of modern tech now’.”

That isn’t to say there aren’t going to be ways to learn and improve on your original 'stick + rock = weapon' designs. Though Grounded is – at its core – a survival game, plenty of DNA from Obsidian’s back catalog makes it through the shrinking machine, too. “Being that we are Obsidian, we wanted to include some form of progression and player choice,” Atadero said. “With this we are working on a party shared tech tree where players can contribute towards unlocking new crafting items and buildings to create.”

Working together with friends in online co-op, you can unlock new recipes for base building or tools by analyzing resources you gather on your expeditions. Pebbles that make for a sturdier axe to harvest more grass blades, or stronger woven fibers to lash them together and withstand attacks. While this makes fertile ground for growing in-depth strategies with your friends, there is an emphasis on keeping things simple for newcomers to survival genres. Perhaps fans of Obsidian’s other games may be able to find the RPG DNA missing from others in the sandbox battle royale that plays out on the Steam top sellers list.

“Lastly, I would say we are focusing strongly on approachability,” Atadero said. “We found that sometimes survival games can be a bit off-putting to players because systems, mechanics, and interfaces are often dense or hard to use. We are putting a lot of attention on smoothing out a lot of those rough edges without sacrificing that core survival experience players come to expect.”

Part of making the game more approachable to some players has already involved turning off some of its most effective elements. When the game arrives today there will be an 'Arachnophobia Safe Mode' in the accessibility options menu, introducing a slider which gradually turns off some of the scarier parts of the spiders in the game until they resemble floating, upside-down snowmen.

The team took the decision to add this option after player feedback from various testing sessions revealed that the intentionally terrifying arachnids were a little too effective on some people. We can personally atest that, when playing the game on a demo booth at X019, the sudden appearance of the spider at the end of the scripted base siege made us involuntarily yelp and jump hard enough for our headphones to fall off. Many similar reactions led Grounded's designer Jerrick Flores to consult the Xbox user research team at Microsoft to find out what they could do to keep the game playable to people with more significant arachnophobia than the average journalist.

This approach to approachability and accessibility should open wide a traditionally impenetrable survival genre. So if you've wanted to check out Rust, ARK, or The Forest but felt like you couldn't handle the complexity, or the horror elements, this may be the crack you can slip in through. Especially now that you're an inch tall.

You can check out Grounded now on Steam or Xbox Game Preview, with a full release planned for sometime in 2021. The full version of the game will include more bugs, more biomes, crafting recipes and a complete campaign to uncover the hidden story of how you ended up so small anyway.