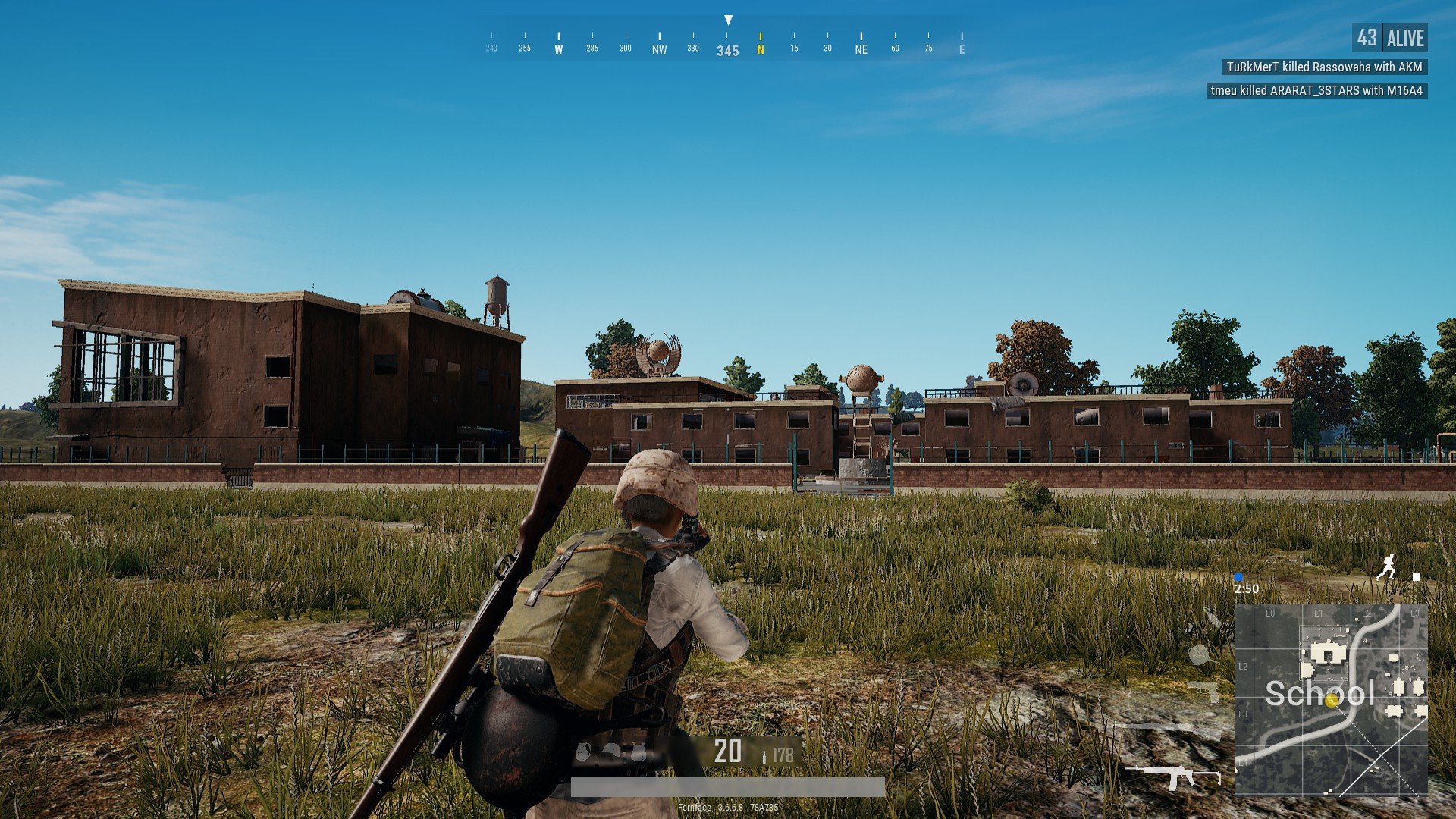 Why we love PUBG's School

Scanning over PlayerUnknown’s Battlegrounds’ Erangel map, a few locations quickly draw the eye. The large northern city of Yasnaya Polyana, Pochinki’s triangular streets, and the loot-filled Sosnovka Military Base. You’d be forgiven then for skipping over the almost diminutive School, sandwiched between the towns of Rozhok and Pochinki. Take note, however, as those with experience in Bluehole’s battler will tell you, this smaller spot has one hell of a reputation.

The interesting thing about School is that, as a choice of looting location, it isn’t all that great. Sure, you’ll almost always come away with a rifle or two, but realistically there’s only enough gear for one of two players, and that’s assuming you don’t expend too much while contesting it. Despite this, you’ll regularly see up to 15 players dropping there when the flight path permits, even in Squads mode where each team has up to four members.

When players drop in droves to the Military Base, it’s because they want to secure the best loot the game has to offer, giving them the highest chance for success in the final circle. For experienced players, it all comes down to stacking the ending odds in your favor. Heading to the School, however, all of that is put to the wayside. Landing on the roof of the two-story complex, chicken dinners don’t even matter. You come here for one reason, and one reason only: to kill. In the world of Battle Royale, School is PUBG’s fight club. And we love it.

Positioned almost directly on the centre of the map, dropping at School means you rarely if ever have to concern yourself with the game’s first circle, giving you all the more time to focus on the fight. Even in the rare cases that the ring spawns towards the island’s edge, you’ll only have a few hundred meters to travel, giving you a good five to ten minutes to duke it out. The house of education’s notoriety has been further pushed by streamers, who established the building as a popular starting point in the game’s early days. Fans soon began to flock there in droves, further cementing its deadly reputation.

The School building is also the perfect balance when it comes to size. Chiefly a single building, the three level design (including the roof) is contained, but large enough to allow for three to four gunfights to occur simultaneously, spread throughout the C-shaped, long corridor layout. In this way, School may be action packed, but it’s rarely chaotic. This is far from an open plane with bullets flying each and every way, instead requiring fast, and efficient looting, followed by careful positioning around corners, staircases and doorways to prove yourself. Miramar’s Pecado casino and the hilltop Hacienda del Patrón mansion are the closest contenders on PUBG’s latest map, but neither quite matches the brutal atmosphere of mutually agreed combat that School provides.

Given a few minutes of fast and loud action — and if you’re lucky enough to survive — the school will plunge into eerie silence. Don’t be fooled into believing you’re safe, however, this is merely the next stage of the contest. Beyond the early scraps, two or three hardened survivors will come out on top, and you can be sure they’re listening out for the tiniest sound clue to their rivals’ locations.

In this way, the battle for School almost perfectly encapsulates the entire essence of PUBG. From the dramatic opening, with player numbers swiftly whittling down to a tense standoff between this round’s hardiest competitors, it tightens the full experience into a sharp, five minutes of combat. Winning here isn’t quite the same as securing that tasty chicken dinner, but the sense of euphoria at conquering one of the game’s toughest spots is tangibly close.

In fact, it’s because of this that School so often leads to some of our most successful games of PUBG. Taking this battle here provides a sense of release from the typical level of stress that the latter stages of the game engender. After claiming triumph in the bullet-ridden hallways, it almost doesn’t matter how we perform in the rest of the game, and that freedom allows us to play better than ever. Even if you don’t make it much further, taking the school will almost always net you a few kills, leaving you with a sense of accomplishment and a slew of points regardless of your placement.

Finally, heading to School offers you a choice regarding how you’d like to play, and in more way than one. PUBG is hardly the longest competitive multiplayer game on the market, but it’s also hard to judge just how much time you need to commit. If the prospect of a full round is a little too much, having a place in which you’re guaranteed a rapid fight gives the perfect chance to simply kick back and earn some kills until you need to move on. Even if you come out on top, you’ll be close enough to Rozhok, the puzzle piece tower blocks to the east, or even Pochinki to find yourself a would-be killer.

The area design also allows you to mix up your strategy substantially. Anyone who’s spent four games in a row slowly looting Yasnaya’s tower blocks will understand the need for variety. At School, you could drop straight to the roof, trying to grab the nearest weapon and prove yourself a faster hand than those doing the same. Alternatively, you can aim directly for the stairwells or one of the two rooftop trapdoors to escape the initial rush and scour the gymnasium or lecture hall for better gear. If you’re feeling particularly tentative, parachute to the floor and you can even head to the compounds side building, letting you detach yourself slighty from the main match.

Each run at School gives you a chance to try something new and enjoy the result quickly. Even if you’re the first to go down, the central locale means you can typically be back in the action with only a few minutes pause. Next time you play PUBG, take a trip to the School, and get a lesson in combat.