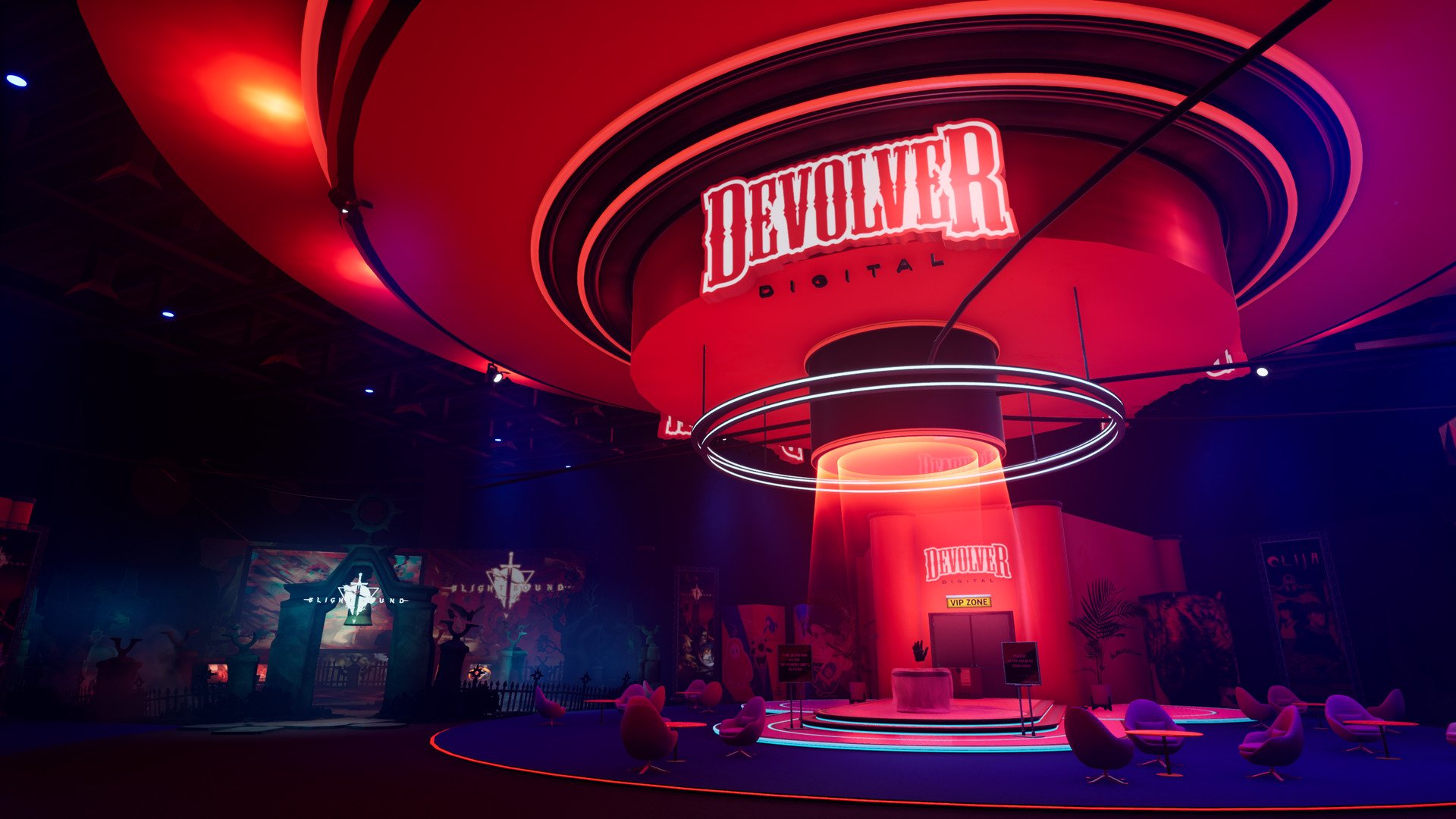 Devolver’s latest “Big Fancy Press Conference” poked fun at industry hype and gave us new phrases to throw around like “check a look” and “future’s future.” It also came with an unexpected surprise at the end in the form of Devolver’s new free-to-play title, Devolverland Expo.

If you’ve been feeling depressed at the closure of events like E3 this year, Devolverland Expo has a unique alternative for you. Essentially, developer Flying Wild Hog – the team working on Shadow Warrior 3 – recreated the Los Angeles Convention Center to a surprisingly accurate degree.

It isn’t an exact replica per se in that areas are blocked off and most of the doors are locked. You also can’t explore outside the building. However, it still manages to offer an E3 experience in a nice, condensed little package.

The “game” itself is also wildly clever in how it ties to Devolver’s press conference and the way in which Devolver markets their games.

The gist is Devolverland Expo is E3 if E3 was Devolver and only Devolver. As soon as you set foot inside the building, you’ll find promotional material for upcoming Devolver games like Carrion and Fall Guys along with some security droids.

It’s nighttime in the game and you’ve gained access by breaking an entering, so it makes sense there’d be security around to keep all that Devolver merchandise safe.

The core gameplay consists of stealth (avoiding security) and a few simple puzzles. You can also scoop up collectibles by taking your time and fully exploring each area.

The average completion time for the game is a little under an hour. For our first playthrough, we beat the game in 55 minutes. It’s short, but it’s free, so we’re not complaining.

The visuals are fantastic and the booth designs are over and above anything you’d see at an actual E3. That alone makes Devolverland Expo well worth your time.

Speaking of E3, the idea of Devolver overtaking E3 and making one of their own – Devolverland Expo – is particularly hilarious as Devolver has always operated outside the hustle and bustle of the Los Angeles Convention Center. Typically, they reserve an area in a parking lot across the street.

The first E3 we attended was E3 2016 and that year they had a nice BBQ party going on that was easy to spot thanks to their signature white Devolver balloon flying overhead. As for why Devolver refuses to set up shop inside E3, it seems like it's a mix between being an indie game publisher and their fierce, unapologetic individuality.

E3 has always been about AAA over indies, whereas events like PAX are a bit more indie friendly. Loving what they do and the games they publish, it makes sense that Devolver wouldn’t want to relegate themselves to a small corner tucked away at the back of E3 when they can set up a nice hangout spot right across the street.

Devolver’s “Big Fancy Press Conference” framed itself as a parody, poking fun at how ridiculous E3 press conferences often are with the addition of an over-the-top storyline featuring legendary characters like Nina Struthers.

The narrative has only grown and evolved since then. Now, Devolver’s press conference feels like a show you might see on Adult Swim. In fact, we think Adult Swim should dedicate an entire series to Devolver and characters like Nina Struthers. We’d watch the hell out of a Devolver show!

Circling back to the main point, Devolver’s press conference is fantastic, and it’s grown exponentially over the last three years as has Devolver. Despite this, we have no doubt that had E3 happened this year, Devolver would've set up shop in their usual spot across the street. That's Devolver, it'll always be Devolver, and we love them for it.

It’s this picture of Devolver Digital at E3 and during their press conference that makes Devolverland Expo so amusing and enjoyable.

We may not be able to physically go to E3 this year, but we’re able to virtually attend Devolverland Expo. In these trying times, the ones to provide us with a virtual convention experience aren’t those in charge of E3, it’s the people who’ve always operated on the outskirts, Devolver.

We also have to say that it’s impressive how quickly developer Flying Wild Hog was able to put the game together. It’s not as fleshed out as it could’ve been had the team had more advanced notice, but under the time constraints, it’s an impressive feat.

Devolverland Expo looks stunning and has some fun concepts from being able to slide into a playground booth for Fall Guys to being able to stun security droids by shooting at them with a t-shirt cannon. If we had to critique anything, we’ll say that we were a tiny bit disappointed that you couldn’t actually demo any of the games.

For some titles like Shadow Warrior 3 and Olija it makes sense as the games were only recently announced. For others like Carrion and Fall Guys that are scheduled to release soon – like, really soon – it would’ve been cool. We also wish there was a mode where we could explore the convention center during the day, no security droids present.

We’d love the ability to take our time and soak in the cool booth designs and promotional displays without feeling like we’re about to be caught at any moment. Could you imagine if there was multiplayer as well? Where you could explore the convention center with your friends?

It’d be like visiting your friends in Animal Crossing... kind of. We secretly hope Flying Wild Hog adds on to the game even though we know they’re busy with Shadow Warrior 3 right now.

Devolverland Expo harbors the promise and possibility of being able to enjoy events virtually in a way that works, that makes sense, that’s fun. Devolver has put their own twist and spin on it, immediately setting it apart from any other virtual convention experiences that may pop up after it. They laid the groundwork, and they did an amazing job.

If you haven’t given it a try, we highly recommend it. Again, the game is just under an hour in length and it’s completely free.

Whether you’ve attended E3 before or not, there’s a little something for everyone to enjoy in Devolverland Expo. You even get to fight a boss! Have you ever fought a boss at E3? No, we didn’t think so. Well okay, maybe you’ve fought with your company’s boss as he rails you for being late to an appointment but that’s no fun. Fighting the boss in Devolverland Expo? Now that’s fun!

Devolverland Expo is available right now, free-to-play, on Steam. Give it a go, and keep an eye out for Flying Wild Hog’s next game, Shadow Warrior 3!