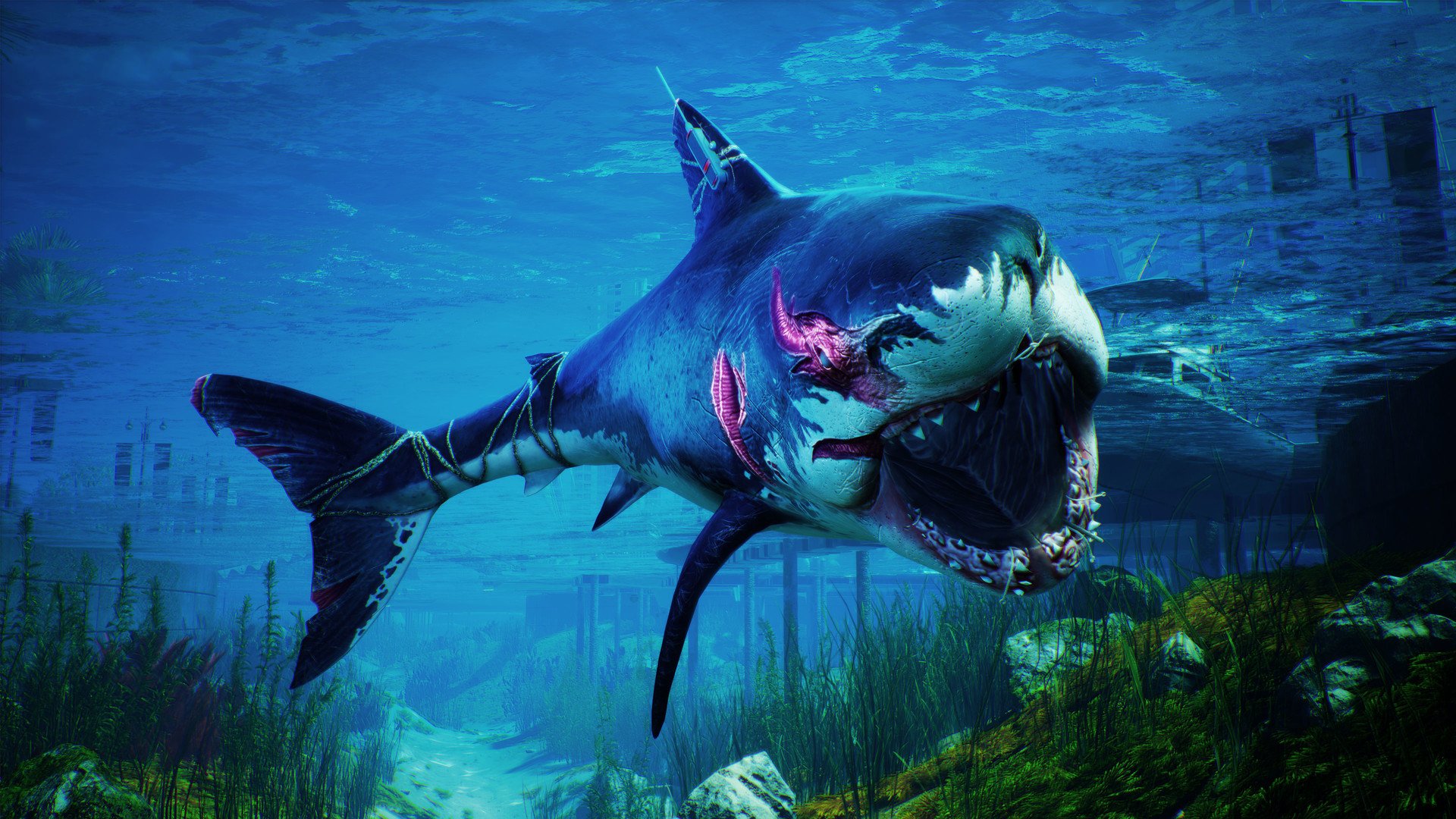 We first encountered Maneater at E3 2019 and were immediately hooked by the game’s wild concept. Being able to play as a shark, grab people off the beach, and take out boats full of angry sharkhunters? Hell yeah, sign us up! Hungry to learn more, we hunted down an interview with Maneater’s game director, Bill Munk.

In speaking with Bill, we found out some incredible things about the game like how Chris Parnell was the voice actor for the game's narrator. It really was love at first bite seeing Maneater at E3. After our interview went live, we were left to patiently wait for the moment when we could become a fearsome shark in Maneater.

Fortunately, we didn’t have to wait too long because the game was released on May 22, 2020, a year after our initial interview. In the weeks following the game’s release, we put a considerable amount of time into Maneater. From exploring the swampy waters of Fawtick Bayou to terrorizing innocent beachgoers, there’s no shortage of fun to be had in Maneater.

The more we played Maneater, the more we started to think back on our E3 interview. Had anything changed in the year that passed before the game’s release? What sort of clues were given to us that made no sense then, but make sense now in relation to the game? Reading through it again, we were hit by a wave of nostalgia.

With new questions floating around in our head, we decided to reach out and see if we could do another interview with Bill Munk. If you love Maneater as much as we do, or simply want additional insight into 2020’s deadliest shark game, read on for our latest interview with Maneater game director, Bill Munk!

Maneater, bull sharks and the talent behind Scaly Pete

Maneater is a game where you get to play as a shark and eat people, but flopping around on land and swimming around are extremely satisfying as well. What was the process of developing the shark physics like in Maneater?

Bill Munk: We have Bryan Wynia, Lead Character Artist, to thank for the satisfying shark experience in Maneater. His work on bringing the shark to life served as the base foundation upon which everything else was built off of for the game’s star of the show.

While most artists spend their careers focused on creating and sculpting for human characters, Bryan has spent much of his career bringing monsters and fantastic creatures to life.

He’s contributed to tons of creatures and aliens you’re probably familiar with and has worked on films including The Predator (2018), Men in Black: International, and Godzilla: King of the Monsters.

You can see more of Bryan’s work on his Instagram account. Plus, he just happens to be a huge shark enthusiast!

Why did you decide to go with the bull shark as opposed to a great white shark?

While we liked the look and idea of featuring a great white shark as the main protagonist, we also wanted to make sure that Maneater could feature a wide variety of underwater environments.

Since the bull shark can survive in both freshwater and the ocean, this decision opened up the doors to create an open-world environment with a lot more variety!

With a bull shark as the main protagonist, players explore through areas like the more shallow, swampy waters of Fawtick Bayou and giant freshwater lakes, like Dead Horse Lake – but also the deep blue sea when The Gulf finally opens up for players.

Maneater is based around a fictional TV show, Sharkhunters vs. Maneaters. Were there any real-life shows that inspired the way the fictional show is presented and narrated in Maneater?

In terms of inspiration, we looked towards reality TV shows, such as Deadliest Catch, particularly when it came to cinematic cutscene sections.

Speaking of narration, how did you approach and eventually land [Archer and Rick & Morty actor] Chris Parnell as the game’s narrator?

Our Audio Director Mark Muraski and his team are the ones responsible for approaching and securing Chris Parnell for this project. We are so incredibly happy that we were able to work with actor and comedian Chris Parnell!

His performance and commentary throughout the game was crucial for telling the game’s story, and setting its tone.

Who’s the voice actor Scaly Pete, and do they have that Louisiana accent normally or did they have to learn it in order to voice the character?

We’re so glad to hear from so many fans who enjoyed Scaly Pete’s character and the dueling tale of revenge that ensues between him and the shark in Maneater.

Scaly Pete is played by Carlo Mestroni. Carlo is a veteran performer with a long list of credits in theater, animation, and many major video game franchises. Carlo was born in Montreal, Quebec and is also fluent in Italian, French, and Spanish.

Lots of folks ask us this question about Scaly Pete’s voice actor, and I think it speaks to the quality of Carlo’s performance. It’s impressive and humbling to have the chance to work with true professionals and experts at their craft – and Carlos is just one example of all the talented folks who made Maneater possible.

The game’s opening tutorial is brilliant where you get to play as the mother shark and get a preview of what you’ll be able to do when you level up your shark. How did the idea of doing a tutorial this way come about?

With the tutorial for Maneater, we wanted to give players a taste or preview of what it will feel like to play as a shark in its later life stage before starting you off as a baby pup.

We also wanted to set the stage for the game’s revenge story. Setting up the tutorial this way allowed us to do both while also weaving the “instructional” elements of the tutorial experience into the game’s introduction in a more natural way.

The tutorial also gives players a fantastic introduction to Scaly Pete. What was the writing process like in creating Scaly Pete’s backstory, and would you say he’s one of the game’s villains?

Although Scaly Pete can be considered to be the “villain” of Maneater, it might be more accurate to frame him as an antagonist or foil to the main character, the bull shark.

Like the bull shark, Scaly Pete has also suffered from loss, a recurring theme for his character throughout the story. We see the physical loss of his limb in early cutscenes and soon after learn about the loss of his father to a megalodon of legend.

Without this added layer of depth to Scaly Pete, he could’ve easily wound up as a more straightforward, two-dimensional villain.

Will we ever get a prequel featuring Scaly Pete’s father and the ‘Megalodon’ that killed him?

It’s an interesting idea! Unfortunately, we’re not quite ready to make any formal announcements about what might be next for more Maneater.

We’re not sure if this would give too much away, but was the mother shark at the start of the game the shark that killed his father, not a megalodon like Scaly Pete believes?

That’s an interesting connection – and we’ve received a few questions from players on this topic. To clarify, the mother shark featured in the opening sequence of the game is actually at the “Adult” level. So, the Megalodon referenced by Scaly Pete is actually a different shark.

Will there be more customization options for your shark, or new playable shark types added to Maneater as DLC in the future?

We are discussing what’s next for more Maneater content internally. But it’s just a little too early for me to confirm or share anything in great detail.

Will Maneater release on other platforms in the future, like Steam?

We do have plans to bring Maneater to the Nintendo Switch! And I’d recommend folks to keep an eye on our official Twitter @maneatergame for the latest regarding news about the game heading to other platforms.

Finally, Maneater has been incredibly popular with gamers following its release. How has the team reacted to the positive response to Maneater?

We’ve been blown away by the overwhelmingly positive reactions to Maneater. We really wanted to create and share something that felt fresh and unique with an open-world action-RPG game where you play as a shark.

Considering the response we’ve received so far, it seems like players are really enjoying it, too!

There’s nothing more thrilling than being able to see folks having fun playing the game you’ve been working on for years. We recently shared a “Thank You” video to our community. You can check it out here!

Thank you again to Bill Munk for doing another interview with us on one of our favorite games this year, Maneater! If you haven’t scooped a copy and are interested in checking the game out, Maneater is available right now on PC via the Epic Games Store, PS4, and Xbox One.