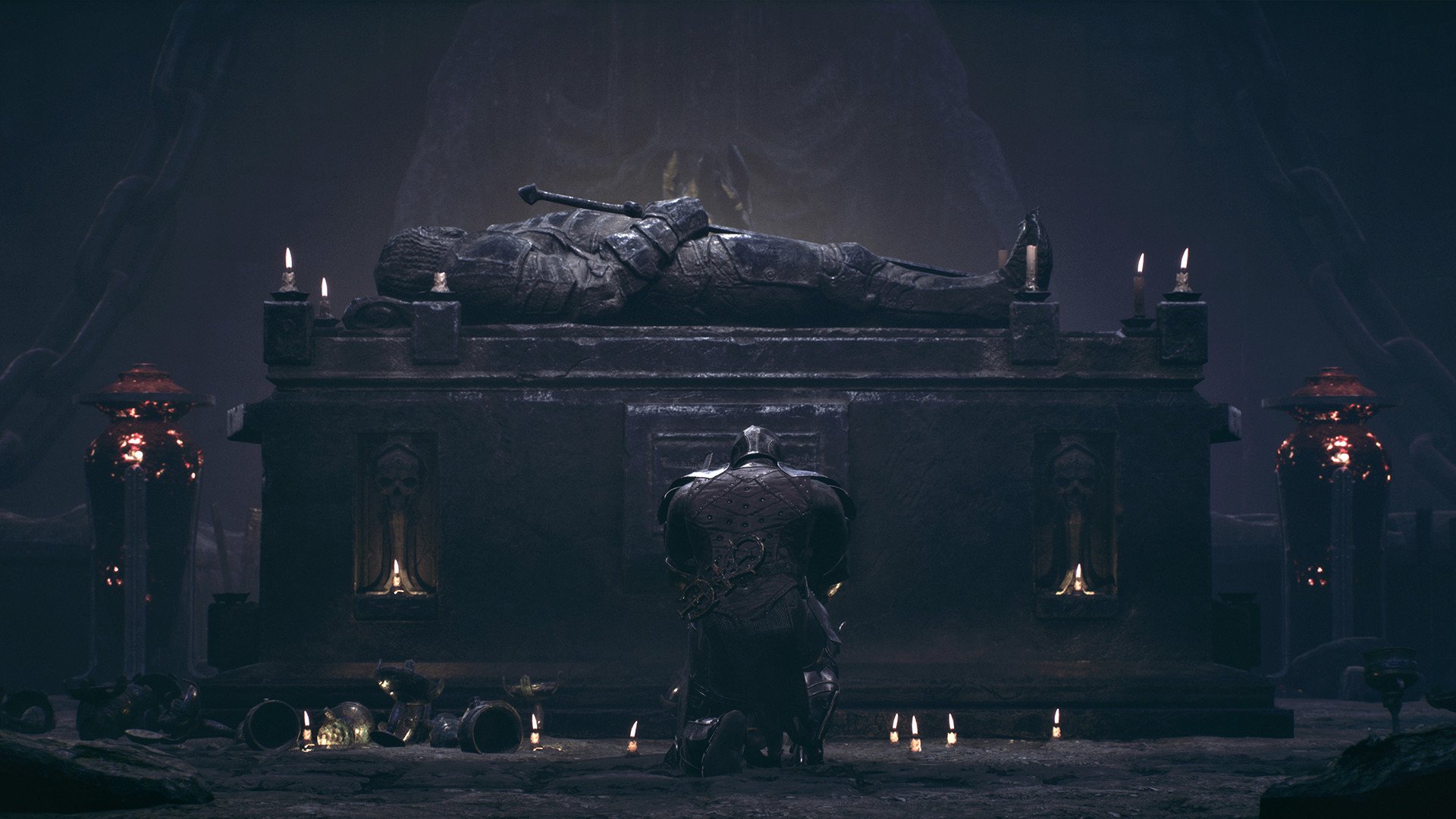 The first thing you’ve probably heard about Mortal Shell is that it’s a Souls-like game thanks to its punishing difficulty. As you play, you’ll realize that not only is Mortal Shell difficult, the game’s setting, theme, imagery, and atmosphere all feel inspired by the Dark Souls series as well.

If you didn’t know Mortal Shell was made by indie developer Cold Symmetry, you may think you’re playing a new FromSoftware game. That said, the farther you get, the clearer it becomes that this is something entirely different. Some new shadowy creature lurking in a dark alley, waiting for you to get closer in order to reveal its true identity.

Our first impression of the game was that it's got an undeniably sharp, original bite to it. Once you're bitten by Mortal Shell, you won't want to stop playing it no matter how much it hurts.

As you dig into the game’s combat, it's easy to see the many differences and unique qualities that help Mortal Shell stand on its own. The first difference is the ability to harden your body. You’re kind of like a Metapod in Pokemon as hardening helps you defend yourself in Mortal Shell.

It's not just defense, your hardened body can also be used offensively. For example, you can harden yourself mid-swing so that when the enemy hits you and breaks through, you immediately launch into a strike giving you time to deal damage and dodge away.

A lot of fun jokes can be made here when talking about getting hard in Mortal Shell but we won’t go down that rabbit hole.

Let's just say that abilities like harden emphasize the fact that Mortal Shell isn’t a hack-and-slash – everything requires patience, planning, and precision.

Enemies hit like a truck in Mortal Shell, especially the big baddies in the first area, Falgrim Outskirts. Taking a hit from them can eat up half your health bar. Getting hit can also stagger you to where you’re unable to dodge quick enough to avoid the second swing, which can then kill you.

While getting used to the combat and learning how enemies behave, be prepared to die… a lot.

The first area doesn’t go easy on you as a newcomer, it has a hidden mini-boss that’s eager to rip out your throat, bear traps waiting to chomp down on your leg, and areas where enemies can sneak up on you and smack you in the back. For example, there’s a quaint little campfire area full of enemies in Falgrim Outskirts.

After you kill the enemies that are visible to you, there’s one more that exits from a tent, late for the party. When he sees all his buddies sprawled out on the ground he comes at you and tries to avenge them. If you took a fair bit of damage from these enemies, one hit from this angry shirtless man could be enough to finish you off.

You might think to yourself, well I can prepare for these encounters by healing myself after a fight. We hate to break it to you, but that’s easier said than done; healing items are in short supply in Mortal Shell. You can pick up a few consumables like a Weltcap or a Baguette, but they don’t really give you much in the way of health.

If you master the art of parrying and have enough Resolve available, you can perform an Empowered Riposte to regenerate health, which is handy, but you may have issues mastering the timing of this move. As stated previously, one wrong move or misstep and you’re apt to lose half your health. The game tries to be forgiving by offering you a second chance though.

If you lose enough health you’re knocked out of your Shell and have a few moments where you can scramble back to your feet and re-enter it. If you’re successful, you’ll be met with a full health bar as a reward. If you’re unsuccessful, be prepared to start all over again. Literally. Death makes you respawn at the beginning of an area and all of the enemies that you killed will have respawned as well.

It’s enough to light a small fire of rage in you where you say to yourself: “This is some BS...” before putting another few hours into the game to prove to it (and yourself) that you’re top dog. One thing we really liked is that your corpse will remain behind where you died during the previous run.

Similar to when you’re knocked out of your Shell in a fight, you can re-enter this leftover Shell at any time to fill up your health bar.

All of these little nuances help make Mortal Shell endlessly addicting. Yes, you’re going to get a bit frustrated early on when the game is still fresh and new, but the more you play, the easier it becomes. Well, “easier” in the sense of memorizing where enemies are and how many hits it takes to beat them.

There will always be challenges and surprises waiting to put your combat skills to the test in Mortal Shell. It gets harder, not easier.

The first two areas available in the open beta (Falgrim Outskirts, Catacombs) are harsh, but fair. We can’t imagine what the other areas will be like when the game releases later this year, but we can picture Cold Symmetry cackling to themselves at the thought of throwing players for a loop.

We know it’s coming, we know it’s going to hurt and piss us off as the game finds new ways to put us in our place, and yet… we can’t wait to experience it. What can we say, we like the pain. It hurts so good.

Before we end this preview to go play some more Mortal Shell, let’s take a look at a few other noteworthy mechanics featured in the beta. First, like the two available areas, you have access to two different Shells. The first one is called Harros, the Vassal and is built like a knight complete with a weapon called the Hallowed Sword.

The second Shell in Mortal Shell is called Tiel, the Acolyte and is the polar opposite of Harros in every way. Tiel is light, has more stamina, but less health so you’re going to want to be even more careful in combat. The biggest benefit to Tiel is his dodge which phases him out into smoke and lets you quickly pull back and plan out your next attack.

The dodge available to Tiel just feels so satisfying in comparison to Harros and his slow little roll. Tiel also comes with his own set of weapons, the Hammer and Chisel. You can switch weapons if you like, equipping Tiel with the Hallowed Sword, but we feel like the Hammer and Chisel are also more enjoyable.

You get to whack and slice like a madman, quickly dodge out of the way, and return to finish the job. Tiel is an absolute beast, we love Tiel. Looking inside the game’s Compendium, we see there are four Shells to discover in Mortal Shell. We imagine that once the game is released, we may see more Shells added.

The Shell system is clever as each one works as its own class. Harros is heavy, Tiel is light, and we imagine the other two may have their own quirks as well. For example, we could see one that’s closer to an “archer” with some ranged damage, or one closer to a “mage” with the ability to inflict special damage like fire or poison.

If you grow fond of a particular Shell, you can make it even more effective by upgrading it. We see a little bit of this in the beta when speaking with Sester Genessa in the Catacombs. It’s a nice touch that adds depth to the game. Another thing that adds depth is the familiarity system. The more you use an item, the more familiar you are with the item.

You can learn more about an item by using it, and you can make items more effective by using them. It encourages you to avoid hoarding items in your inventory. Trust us, we do this all the time where we think to ourselves: “Oh, I should save this item for when I encounter a boss.”

It’d be great if that’s how things went, but sometimes you die before you can use the item you were saving, or you forget to use it during a boss fight because you’re focused on making sure you don’t die. The familiarity system reminds you that hey, don’t forget you have this item.

If you haven’t used it yet, you won’t know what it does and how effective it’ll be in a situation like a boss fight.

The final thing we’ll touch on is that the game appears to have some interesting lore attached. We’re not quite sure what you are in the game. Your true form appears as this muscular skeleton man in the style of H.R. Geiger. One of the most interesting pieces of lore when it comes to insight is called The Letter which reads:

“He summoned me to his tower. Showed me things I’d rather forget. I can’t explain why he chose me, but he said there is a way to heal this affliction. So, don’t think I’m running off. He knew all about you, too. We’ll see each other again. Believe me. Somehow, it’s as if I witnessed my entire life transpire in the blink of an eye. I know what that sounds like, but it’s true.”

It piques our curiosity and makes us want to explore every corner and crevice of the game to uncover more lore so as to add clarity to the pieces we’ve already found. As a whole, Mortal Shell looks like it’s going to be an amazing game once it’s released. It’s hard to believe a game like this was made by an indie studio made up of just 15 people.

The way it looks, the way it feels, the way it plays, give off an aura of a project made by a larger studio. The open beta is available for free on PC via the Epic Games Store.

You can also pre-order a copy of Mortal Shell for $29.99 on the Epic Games Store. If you’d rather play on console, Mortal Shell will also release on PlayStation 4 and Xbox One at the same time as PC.

Right now, the release date is set for Q3 2020. We can’t wait to play the entire game once it’s released. Seriously, the Mortal Shell beta has been a beautiful struggle for us and we’ve enjoyed every single moment of it. Yes, even the moments when we died, restarted, died again, restarted, died even more, etc.