Our breakdown of Hyper Scape hacks will help you learn the tools of the battle royale trade. 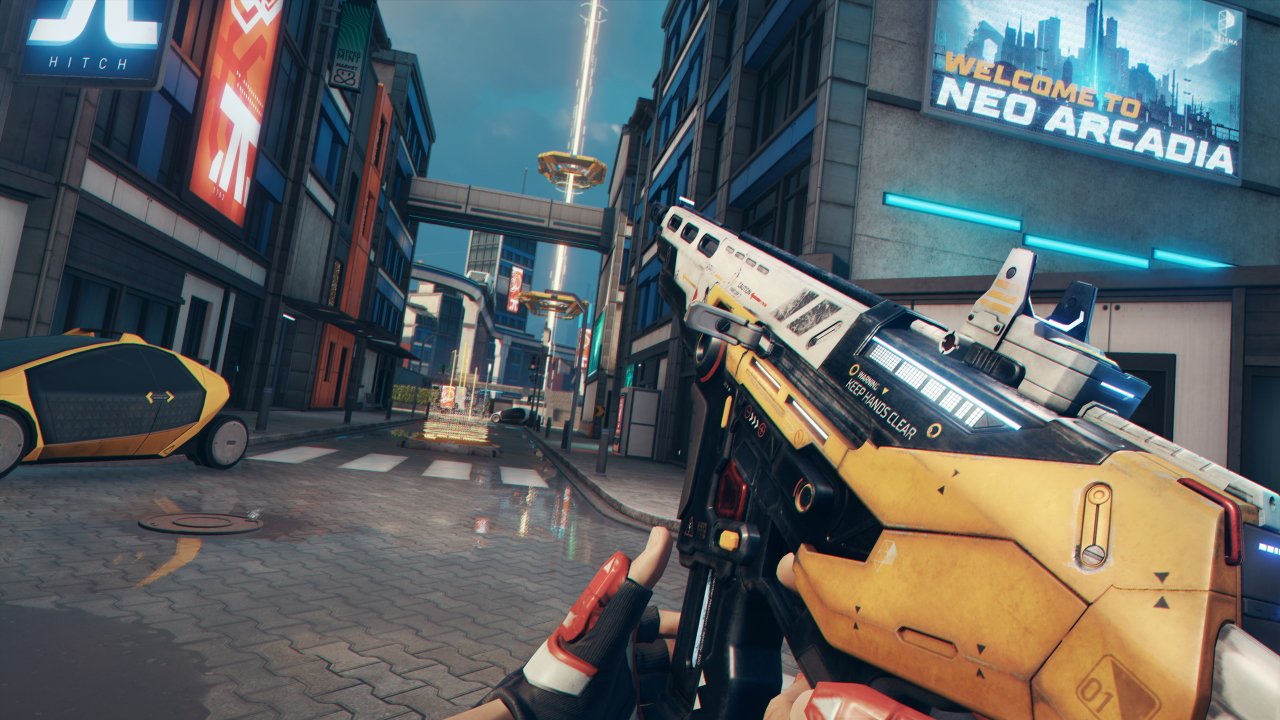 It’s time to say hello to your new guns friends! Hyper Scape is a brand new battle royale vying for your trigger finger and if you dive straight into a match then the intense pace of the game leaves little time to learn the ropes. To help you out, we’ve put together a guide on all the weapons in Hyper Scape that you can pick up from around the map, explaining what their use is and which we consider to be the best guns in the game.

In each match of Hyper Scape you’ll land with only a melee weapon to your name. You need to hunt through buildings and smack open boxes to find weapons. Each has a purpose, though some are better than others.

You can upgrade any weapon by finding another of the same time and choosing to fuse the two. Doing so will grant buffs to the weapon, making it more powerful or versatile. There are four levels of fusion, and the top will often offer an extra benefit. Right, let's load up with a breakdown of all the weapons in Hyper Scape.

One of the weakest guns in the game, the D-Tap is a smart pistol which autoaims within a rectangle displayed on your screen. Useful for folks who like to keep moving around their opponents. Never stay still when using this weapon or you’ll be outshot easily. Keep moving and peppering your target if you want to succeed. Fusing increases magazine size, with the max level increasing damage as well.

A slow-firing, heavy hitting pistol. The Riot One will be popular with fans of the Wingman in Apex, or weapons like the Desert Eagle in Counter-Strike. Precision pays dividends here.

Deadly at close range, the Mammoth MK1 fires slowly but deals beefy damage. A great weapon for clearing buildings early in the game or for getting up close during the late stages. Fusing increases magazine size, with the max level increasing damage as well.

Your standard video game assault rifle. The Ripper is a run-of-the-mill rifle that’ll serve you well in almost any scenario. Fusing increases magazine size, with the max level increasing damage as well.

The Komodo fires balls of plasma that explode on impact in a small radius. Shots deal decent damage and knock opponents away from the blast slightly. Fusing increases magazine size, with the max level increasing damage as well.

The Hexfire is the weapon for people who never want to stop shooting. Though each shot deals minimal damage, the rate of fire is very high and the magazine is enormous. Use this to relentlessly pursue and damage enemies at mid-range.  Fusing increases magazine size, with the max level increasing damage as well.

A bolt-action sniper with an 8x scope, the Protocol V is your long range assassination tool. Upgrading this weapon and landing headshots will take down opponents faster than almost any other weapon. Note that the shots are hitscan, meaning there’s no bullet drop, so always aim for the head.Fusing this weapon increases damage.

The Salvo EPL fires powerful grenades which bounce once off scenery and explode on impact with other players. So long as you’re not firing at a foe above, the Salvo EPL is a decent weapon, best suited to clearing buildings. Fusing increases magazine size, with the max level increasing damage as well.

One of the most powerful weapons in the game, the Skybreaker shoots balls of energy which explode upon impact, dealing damage over a small area. The further the ball travels, the wider the damage radius and higher the damage. Great for clearing insides of buildings from a distance, or for alternating shots with a different weapon. A sniper shot followed by a Skybreaker will finish most foes off quickly. Combos well with the Slam and Teleport hacks. Fusing increases damage.

The Baton is your starting weapon, largely used to break open doors, windows and boxes. It’s not great for attacking opponents, but in a pinch it’ll deal 20 damage per hit. Remember to bob and weave.

The best weapons in Hyper Scape

Of all the weapons in Hyper Scape, the best weapons currently are generally agreed to be the Skybreaker and Protocol V.

Though it’s only effective at range, the Skybreaker deals massive damage when used at range, and doesn’t require precise aim. When using the Teleport or Slam hacks, it’s easy to get distance from your opponents before launching energy balls back towards them on the ground. Bear in mind that the Skybreaker isn’t useful when fighting airborne enemies.

The Protocol V is Hyper Scape’s only sniper, and at first it can feel a little underwhelming. However, upgraded to its max level, the Protocol V can down enemies in a single headshot, which no other weapon is capable of.

While the Skybreaker and Protocol V are powerful, they require smart play or precision, and won’t guarantee victory. It’s usually best to pair one of them with a more standard weapon like the Ripper or Hexfire.

Those are all the weapons in Hyper Scape, as well as our recommendations for the best weapons in Hexfire. Have your own suggestions? Let us know in the comments below! Click here to head to the Hyper Scape game hub for more tips and tricks.