A Hyper Scape console release is on the cards - here's what we know so far. 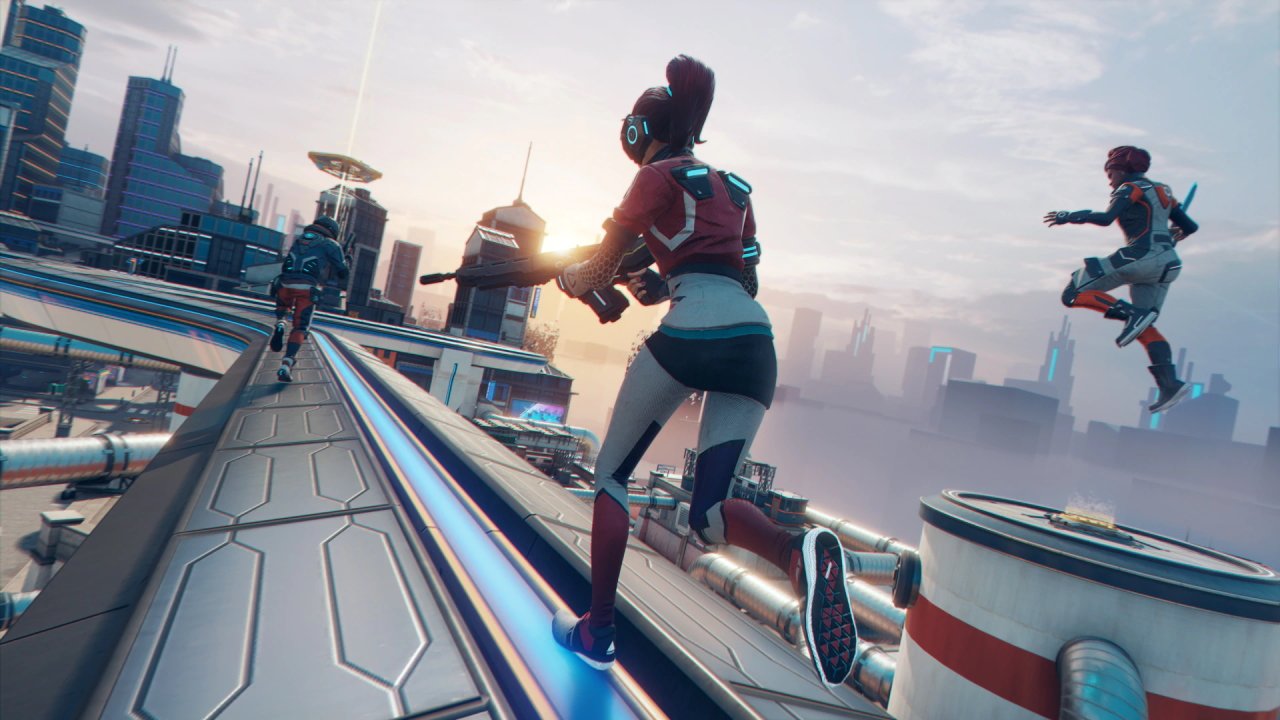 A look at all of Hyper Scape's weapons and our pick for the best guns in the game.

If you want to rule the streets (and monorails) of New Arcadia, you’ll need to master more than your trigger finger. Hyper Scape’s Hacks are a crucial part of this virtual battle royale, and if you want to come out on top in combat, it’s worth learning what all of them do, and when you want to use them. We’ll provide a breakdown of all Hacks in Hyper Scape below, as well as our opinion on the best Hacks to use in Hyper Scape.

As of the PC technical test, there are nine Hack in Hyper Scape that you can pick up while tearing across the map. These will let you do everything from build a wall to leap into the air, meaning you need to be prepared to both use and face them all. Here’s a breakdown of all Hacks in Hyper Scape, including the base (unupgraded) cooldown times.

Power: Negate all damage for the duration of the armor (6 seconds), but become unable to shoot or use other abilities.

Notes: Armor makes you invincible, meaning it’s best used when your opponent unleashes a powerful attack, you trigger a mine, or if you need to move through a dangerous space on the map. Fully upgraded it becomes an incredibly powerful tool for holding the crown in the end stages of a match thanks to the rapid cooldown. You can use the ability a second time or pull out a weapon to end the armor early.

Power: Encases you in a large metallic ball which bounces across the ground

Notes: Hold space to bounce higher. The ball can be destroyed by focussed gunfire, but serves a decent use as an escape tactic. Upgrade this Hack as soon as you can. The short cooldown makes it a powerful tool combined with armor or invisibility at the end of the game. Upgrades reduce cooldown.

Power: Aim and place a healing marker that heals you and teammates when nearby.

Notes: You can place the heal and then swap to another hack, the heal will stay active on the floor. Upgrades reduce cooldown and fully fusing increases the heal rate.

Power: Turns you completely invisible for around 7 seconds.

Notes: While this is a great tool for repositioning, you will make a subtle noise that sounds like white noise. It won’t matter at range, but if an opponent with a good headset is up close, they will be able to follow your movements. Upgrades reduce the cooldown time.

Power: Places a mine which will home in on any enemies who approach it, dealing 50 damage.

Notes: The Mine Hack is best used inside buildings or while running from an enemy, as it’ll give little time for them to react. You can also place the mine then swap to another hack. The mine you placed will remain in its position for a long duration. Upgrades reduce cooldown and fully fusing also increases damage to 75.

Power: Pings the surrounding area through walls, marking enemies with a red indicator visible to all allies.

Notes: The ping ability is effective at finding enemies who like hiding in buildings. When facing aggressive opponents it’s far less useful, but if you like to play cautiously or are struggling with someone camping then Reveal may help to track down your foes. Upgrades reduce cooldown time.

Power: Launches you high into the air before slamming back down, damaging an area around you. You can choose the position you land by looking at the floor.

Notes: While it can be used aggressively, Slam is perhaps best for repositioning on top of buildings, similar to the teleport ability. It’s also a great way to move out of danger when you’re shot at unexpectedly. Upgrades reduce cooldown time.

Power: Teleports you a short distance in the direction you’re looking.

Notes: Teleport is one of the best mobility hacks, and can be used to reposition from enemy fire or jump between rooftops. Upgrades reduce cooldown time.

Power: Spawns a large wall with 250 health at the chosen position.

Notes: The Wall can be used to both block enemy fire or trap someone in an unpleasant location. In addition it can be used underneath you or another to lift them high into the air. Walls spawned in the air stay floating where they’re spawned, meaning you can hide up on top of them. Upgrades reduce cooldown.

The best Hacks in Hyper Scape

Right now, the best Hacks in Hyper Scape are considering to be mobility hacks such as Teleport and Slam. These will provide the biggest advantages during gunfights throughout most of the match, allowing you to quickl move around enemies, dodge their fire and deal damage. However, during the end phases of the game it pays to have a player with upgraded armor or invisibility on your team, purely to hold the crown without the other side being able to touch them.

Those were all the current Hacks in Hyper Scape as well as our picks for th best available. Following the PC technical test there’s a chance Ubisoft may change how abilities work or adjust the cooldown times. They may also add new Hacks into the game, so we’ll do our best to update this list if that happens.