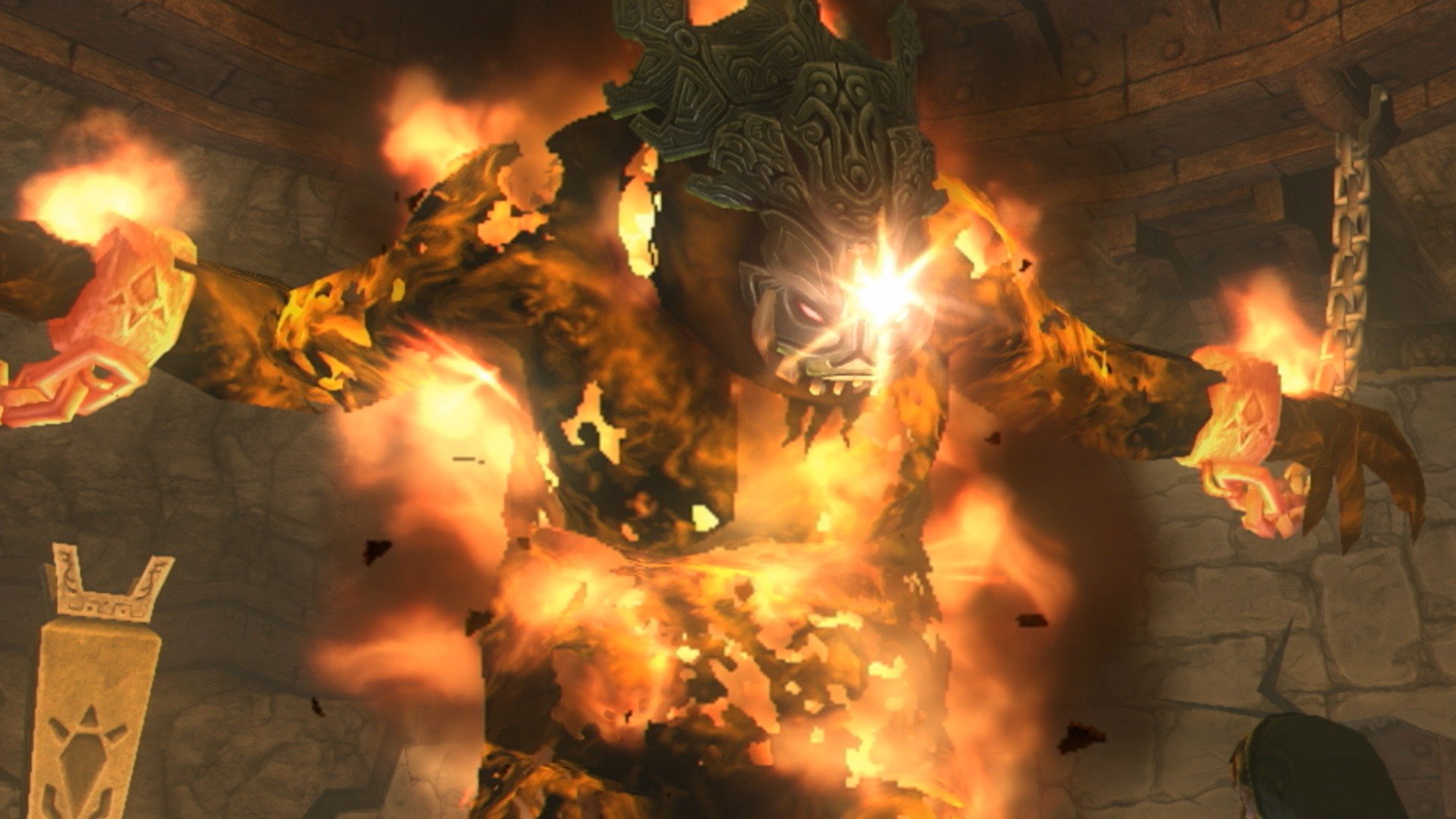 The Legend of Zelda series has some of the best bosses in gaming. With almost every entry marked out around thematic dungeons and clever game mechanics, the mix of great character design inspirations and innovative items makes so many of them memorable. Here we’ve tried to cut down the hundreds of hopefuls to just the best 10 bosses in Zelda. Maybe you’ve got your own favourites, too.

While not an incredibly memorable game, or at least one of the more divisive entries into the saga, Skyward Sword’s bosses were all huge gulps of fresh air. Motion controls, while fiddly for some, opened the way for some new ways to interact with enemies with old favourites and even some new items for Link’s toolkit. One of which, the whip, lent itself to the most satisfying boss fight of the game where cracking the Wiimote at a gigantic six-armed brass golem’s joints would rip it to pieces and let you use a huge sword to smash its heart. Glorious.

Calamity Ganon - Breath of the Wild

While the latest Zelda game has a distinct focus on the world outside of dungeons, it still has some classic boss design. Fittingly for a game all about learning on your own and devising multiple tactics against single enemies, its grand finale is quite literally the final test of your skills. Calamity Ganon combines bits and pieces, terrifyingly might we add, from almost every previous divine beast boss into one challenge. All your friends chipping in to give you a head start is an epic touch if you freed all the Divine Beasts as well. With all the right gear it’s a thrilling battle, and its final phase is a brilliant victory lap for the best game ever made.

As the first Zelda to take place in three-dimensional space, Ocarina of Time got to invent and reimagine a lot of staples for the series. With the Shadow Temple, that familiar Wallmaster enemy from 2D Zeldas got upgraded to a boss concept in Bongo Bongo. Disembodied hands, banging the stage floor as a drum while you try to damage its single eye lurking in the darkness. Honestly a scary experience.

When is a boss fight not a boss fight? When it’s clearly a NASCAR race disguised as one. With all the body morphing and power-changing of masks in Majora’s Mask, the mechanical bull Goht is the one boss that really gets the best out of Link. Challenging our hero to a deadly drag race around his lair, replete with sick jumps and falling rocks, this is one fight we’d happily turn the clocks back for.

Stalbind - A Link Between Worlds

Link’s barely explained ability to become a painting at will gave this 2D-3D reimagining of A Link To The Past life far beyond its forebears. But the boss that really showcased this best was hidden away in the Thieves’ Hideout in Kakariko, waiting to be bamboozled by a magic drawing. Breaking open the giant skeleton lad’s defences by hopping onto his shield is a joyful prank of a fight mechanic, and every time he thought he’d figured out what Link was up to he was just adorably wrong. We feel bad about this bullying, but it is extremely fun.

Ol’ Queen Gohma has a bit of a hard life in Zelda. Always an early boss, always a tutorial about glowing eye weakpoints, always a forgotten challenge by the time you reach Ganon. Not this time, though. Queenie’s harassment of our dragon pal Valoo is getting out of hand, so after pulling his tail a bit ourselves and getting rid of that tough exoskeleton, we get to put a stop to that. The sight of Link soaring up out of the way of an incoming claw attack just before the roof comes tumbling down on Gohma is very satisfying.

By now a staple or even a cliche of the genre, the only thing we had to fear in Zelda II: The Adventure of Link was Link himself. Dark mirror versions of ourselves are primally spooky, but in terms of a Zelda boss fight it really throws you for a loop. The games tell you always to look for the programmed weakness in a boss’s defence but...we don’t have a weakness, do we? The first time Dark Link pops up in the original sequel is a game-changing moment for the series, and still one of the toughest fights we’ve had.

Surviving the time travel into adulthood in Ocarina of Time is just a mark of the seriousness of Link’s situation in that game. And the first dungeon you encounter in the Forest Temple is a chilling reminder of that. Ganondorf is clearly all powerful now and we’re still carrying around a bunch of kids’ weapons, it’s time to grow up. So when Ganon himself seemingly rides in on a black steed at the end of the haunted house, it’s a tense and scary fight. Throw in the now almost obligatory tennis match and it’s a definite hall of famer.

Twilight Princess was a bit of a trend-bucker with its artstyle and story, daring to be different in Link’s adolescent years. And this early fight was no exception, setting the tone for the rest of the game. After two 3D adventures already, the Zelda formula of “explore dungeon, get item, use item to kill boss” was in danger of becoming stale so Fyrus came along to break the chains – by forcing you to break his chains. Working your way around this puzzle of a fight was just as fun as any before or since so the formula evolution was a success, we’d say.

Helmasaur King - Link to the Past and Helmaroc King - Wind Waker

A true classic and, at the time, definitely one of the more intimidating bosses in the game. A Link to the Past’s Helmasaur King added bullet hell projectiles and a lot of clever bomb placement to destroy his armour to the standard big lizard fight. His flying cousin, the Helmaroc King in Wind Waker went a step further with a changing boss arena as the tower flooded, keeping the family lineage alive in the best of books.