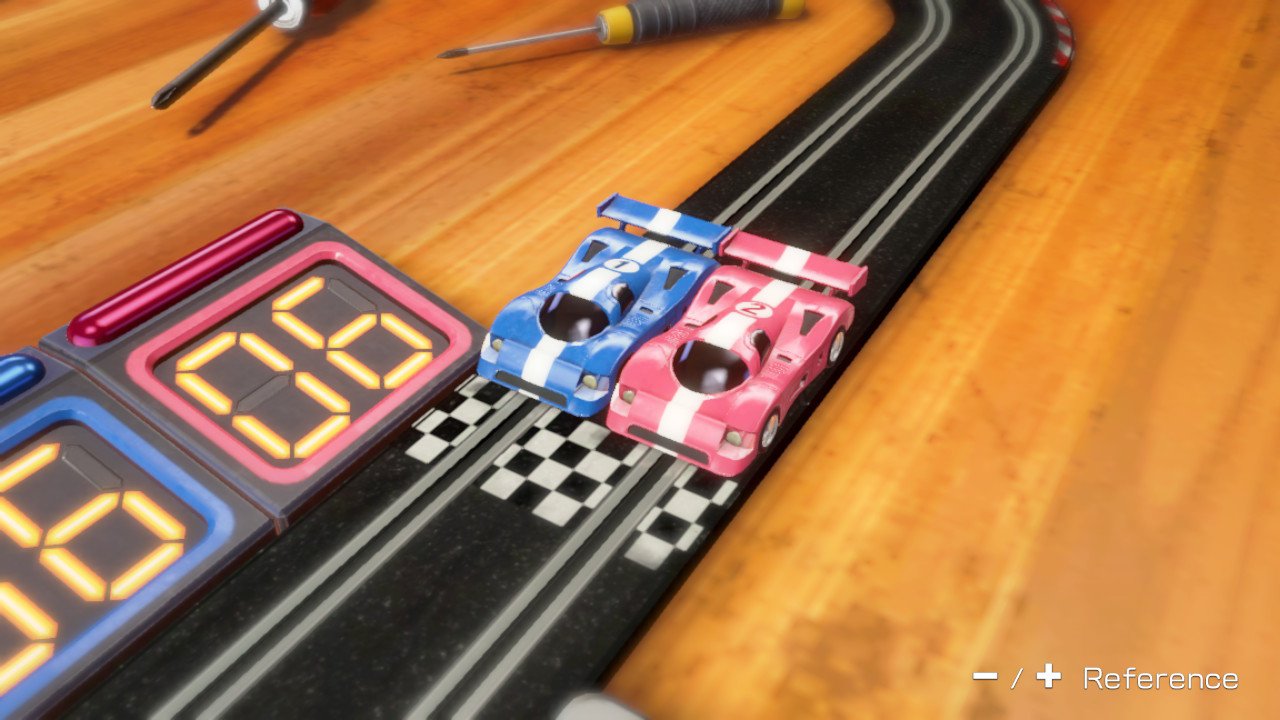 That all good relationships require arguments is a claim we profoundly disagree with. What they really need is a good argument decider. If it’s clear that you and your significant other can’t find a compromise over some menial task or issue, then why waste precious energy bickering? Better instead to settle things definitively with a ridiculous digital showdown. We’d argue there’s no better modern day trial by combat than the Slot Cars minigame from the Switch’s Clubhouse Games: 51 Worldwide Classics.

Released just a couple of weeks ago, 51 worldwide classics is ostensibly a game about iconic board and card games. Backgammon, Hanafuda, Mahjong, Chess; all the famous games you’d expect and more are included. Nestled between these seminal titles however, are a range of far sillier games based on the cheap (and usually tacky) plastic toys that were churned out in droves during the late ‘80s and ‘90s. Toy Tennis, Boxing and Baseball are fun, but much like their physical origins, serve only as throwaway distractions — games you’ll likely play once or twice for a quick smile before dumping for good. Yet among the plastic rough gleams the glistening diamond of Slot Cars. Here, at last, is a game worthy of carrying the Classics accolade.

For those who’ve never played a physical slot car game, the premise is simple: two toy cars are slotted into and raced around a tiny, on-rails track. Your only choice is whether to accelerate, or lift your foot off the gas. Take a corner too fast and you risk springing off the track, but judge your speed just right and you can soar round every turn. To master Slot Cars you must test your nerve and your patience as you teeter on the brink of disaster.

Through a combination of sound effects and the Joy-Cons' HD rumble, 51 Worldwide Classics utterly nails the sensation of the real game. A feeling of barely keeping your car under control is palpable as you push yourself just that little bit faster each lap (and inevitably come crashing off). The game only features three tracks, and you can whizz round them all in less time than it takes to boil an egg. While we’d love to have more, in our house that short length has become the game’s greatest strength. Loading up and blasting through a three-track race takes so little time that Slot Cars has quickly become our go-to method to settle disputes.

Need to determine who gets to play Animal Crossing: New Horizons on the TV rather than in handheld mode? Slot Cars. Both of you want to do the drying instead of washing up? Slot Cars will tell you who’s getting their hands wet. The bins need taking out? You should really take turns at this kinda stuff, but we suppose Slot Cars can also sort you out. Best not to apply this to the big, life-changing stuff, mind; Slot Cars probably shouldn’t decide if you move in together.

Boiled down to its barest essence, Slot Cars is a game of pushing your luck — judging just how much you really don’t want to hang the washing out as you career into the coming bend. And while it might not offer the physical game’s thrill of watching a car flip dramatically off the track to fling itself across the room, there’s also no chance of you damaging this toy (or your surroundings) beyond repair. Fortunate, because no one wants to argue over who’s buying a replacement.