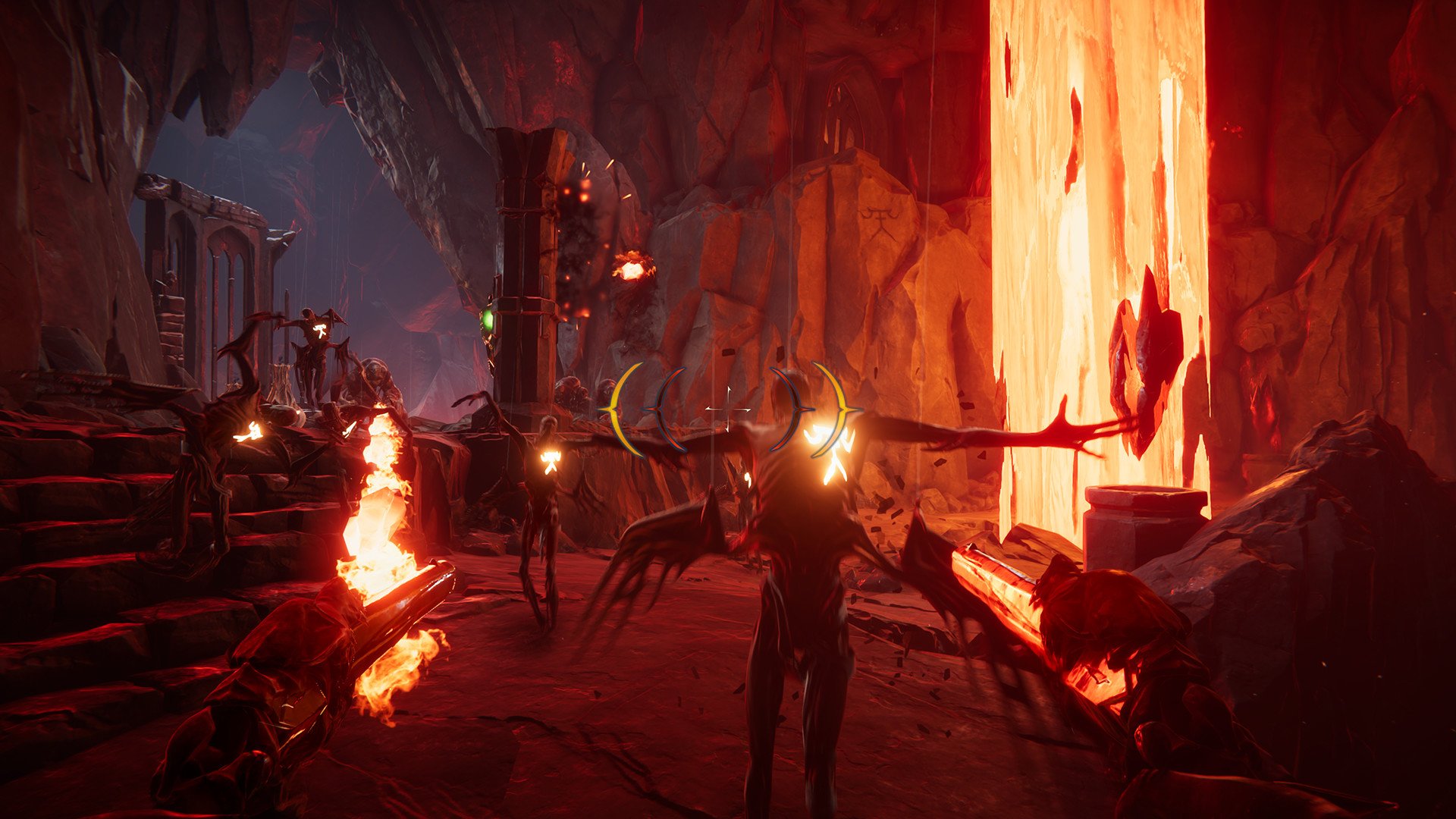 Metal: Hellsinger is an upcoming game from Swedish studio, The Outsiders. Looking at the game’s name on its own, you may expect a DOOM-like FPS or a hack-and-slash dungeon crawler.

As shown in the announcement trailer released today, Metal: Hellsinger is actually a creative mix between a rhythm game and a first-person shooter set to an original soundtrack featuring prominent metal musicians.

Want to know more? Put your horns in the air, we’re taking a closer look at Metal: Hellsinger!

A number of creative rhythm games have been released over the years like Crypt of the Necrodancer and Thumper to name a few, but none are quite like Metal: Hellsinger. Revealed earlier today, the game is the latest passion project from David Goldfarb (Payday 2, Battlefield 3) and Swedish developer The Outsiders.

As you can see from the announcement trailer, Metal: Hellsinger is a first-person shooter where you shoot to the beat. The more in sync you are, the better your experience will be. Elaborating further, when shooting to the beat you deal more damage and destruction. The music also ramps up in the background.

Speaking of music, you get a small taste in the announcement trailer but that preview is only the tip of the iceberg. Metal: Hellsinger features an original soundtrack with prominent metal musicians including Trivium guitarist Matt Heafy, Arch Enemy vocalist Alissa White-Gluz, Soilwork vocalist Björn Strid, and Dark Tranquility vocalist Mikael Stanne.

On the game’s official website, you’ll find a music teaser that offers a bit more insight into the sinister sounds you’ll hear on Metal: Hellsinger’s OST.

The game’s story puts you in the role of a half-human, half-demon creature called The Unknown. You’ve got a bone to pick with The Red Judge, but before you can reach them for an epic showdown, you’ll first need to work your way through The Infernal Planes (Hell).

Based on the description, it sounds like The Infernal Planes will be presented similarly to Dante’s Inferno where there are nine circles of Hell, all of which are more varied than the fire and brimstone setting you normally picture when you think of Hell.

“In order to dethrone The Red Judge, you must fight your way through the fiercest corners, from the icy world of Voke to the maddening world of Stygia,” the game’s description reads.

Watching and rewatching the trailer, the nods to DOOM are unmistakable with how heavy and powerful the guns feel, and how effective they are in blasting demons. We’re also picking up some Devil May Cry vibes with how the point system is presented and the way the music evolves when you’re playing well.

Devil May Cry 5 is a great example of this where the more combos you string out, the more the soundtrack picks up, making you feel like a total badass. The key to playing well in Metal: Hellsinger centers around its rhythm mechanics which appear to be tied to your crosshairs.

You can see the outer portions of the crosshairs move towards the center in time with the beat in the background, showing you when to strike.

While we’re making comparisons here, we have to say that the game’s rhythm mechanics feel a bit like Crypt of the Necrodancer where you have a beat timer at the bottom of the screen to show you where the beat is in order to help you move around effectively.

Your movement in Metal: Hellsinger isn’t tied to the beat, but the amount of damage you deal certainly is.

Having these rhythm mechanics tied to damage and background music rather than movement is a great way to incentivize gamers to play along rather than disregard strategy in favor of blasting everything in sight regardless of whether it’s to the beat or not.

As a whole, we’re really looking forward to checking this game out ourselves and getting a feel for how rhythm mechanics work in conjunction with FPS combat. Not to mention the original soundtrack featuring some of our favorite metal musicians.

We have no doubt the OST will sell extremely well on its own, especially with names like Matt Heafy and Alissa White-Gluz attached!

Metal: Hellsinger is scheduled to release in 2021 on PC (via Steam), Xbox One, Xbox Series X, PlayStation 4, and PlayStation 5. If you know you want to play on PC, you can wishlist the game right now on Steam!