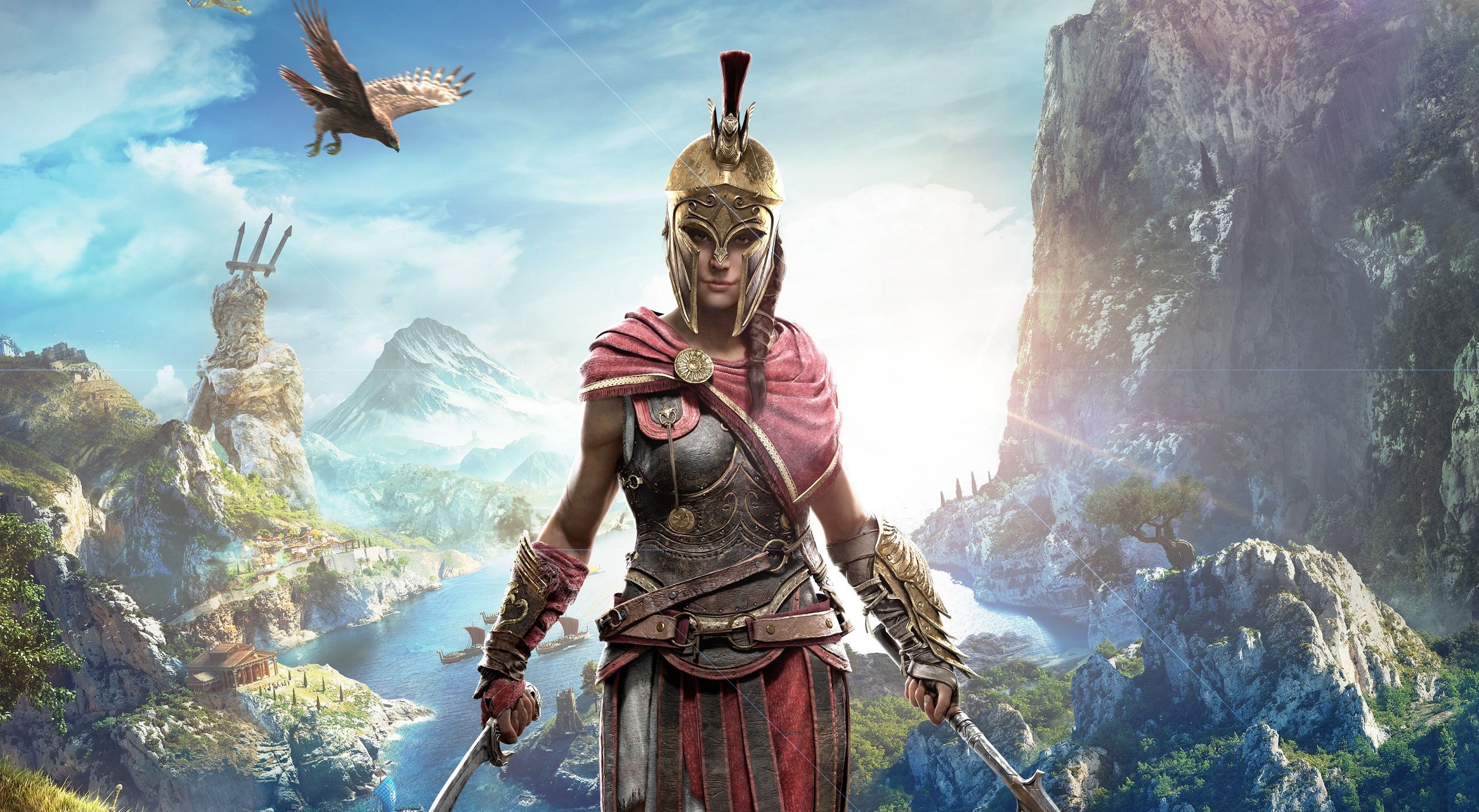 We’re now seeing an increase in LGBTQ+ characters in games, and it’s really refreshing. It’s important to have these stories told in games as it can be beneficial to someone who’s LGBTQ especially if they lack the support of their family and friends.

It also makes sense that there would be LGBTQ in games as there are plenty of game developers and people in the gaming scene that are LGBTQ themselves.

In celebration of Pride Month, we thought it would be fitting to take a look at some awesome LGBTQ video game characters!

Ellie (The Last of Us)

With the upcoming release of The Last of Us Part II, we thought we’d start the list off with Ellie. While her sexuality isn’t discussed in explicit detail in the first game, it later comes up and is expanded upon in the DLC, Left Behind.

If you never played Left Behind, Ellie shares a kiss with her friend Riley, informing players that Ellie is either bisexual or gay. Creator Neil Druckmann eventually confirmed and specified that he’d written Ellie as a gay character.

We’ll come right out and say it, Parvati is our favorite character in The Outer Worlds. She’s a skilled engineer, a wonderful companion to talk to, and has an interesting backstory.

Your job is to help accompany Parvati in meeting Junlei, and later with helping Parvati craft the perfect date for her and Junlei. As you talk, you learn that not only is Parvati interested in women, she’s also asexual.

Asexuality isn’t represented often in video games, or media as a whole, so it’s extremely refreshing to see a character like Parvati in The Outer Worlds. The way she describes what being asexual means and the challenges it creates in relationships is very, very real.

Dorian is one of BioWare’s expertly written LGBTQ characters, and one of our personal favorites. Not because of his sexual orientation, but how his story unfolds. In Dragon Age: Inquisition we meet Dorian as an expert mage and a jokester who uses sarcasm to deflect from complex situations.

He’s cocky and wildly entertaining to have as a companion, always having something witty to say. Unfortunately, if you don’t identify as male Dorian is off-limits as a romance option because Dorian is gay.

Adding to this, you actually get to accompany Dorian in coming out to his father which ends with his father disowning Dorian for his sexual preferences. It’s a feeling of loss and rejection that many LGBTQ individuals experience unfortunately. Some parents are wonderfully supportive, others are not.

You don't need those people in your life if they're going to be close-minded. You are who you are, and if they can't accept that, it's their loss. Stepping away from our soapbox for a minute, we want just want to say that we appreciate seeing a character like Dorian and the struggles he faces in a game like Dragon Age: Inquisition.

Despite everything, Dorian is wonderfully, beautifully himself and we love him all the more for it. For more on why Dorian is so amazing, we recommend checking out this wonderful article from our friends at Prima.

Chloe’s sexuality isn’t the main focus of Life is Strange, though you do get a sense of it as you form a relationship with her while playing as Max. Romance can develop between the two towards the end (we’ll try to avoid spoilers here), but Max isn’t the only one Chloe has feelings for.

The disappearance of Rachel Amber in Life is Strange and Chloe’s heartbreak and anger over this makes sense when you see their relationship in the prequel, Life is Strange: Before the Storm.

It’s hard to say whether Rachel’s feelings for Chloe were genuine given the things we learn in Life is Strange, but there’s no doubt about Chloe’s feelings. Romancing Rachel Amber in Before the Storm is optional just as romancing Chloe as Max is optional.

That said, the fact that we’re given these options and how they develop feel really real. It shows how friendships can sometimes turn into something more, whether they work out or not is unknown.

For Rachel and Chloe that wasn’t the case, but maybe that’s for the best because if we’re being totally honest here, Max and Chloe are a better fit for one another.

Varus is technically one of the first gay characters in League of Legends with others confirmed later like Neeko. It’s more than Varus being gay though, he’s made up of two gay lovers fused together. It’s… it’s a little hard to explain.

Let's start at the beginning. We get a nice little backstory for Varus in a promotional music video, As We Fall. In the video, we see a blossoming romance between two men named Valmar and Kai.

Despite the struggles and dangers they face, they’re determined to stay together no matter what. This is emphasized when Varus is brought to life. When Kai becomes mortally wounded, Valmar takes him into the well at the Temple of Pallas to try and save him.

There, they encounter darkin power that consumes them, overpowering them and turning them into a host for Varus, freeing him from his imprisonment. More of this is elaborated upon in the story of Varrus posted to the League of Legends website.

Rather than be apart, Val and Kai join together and continue to fight Varus from within, holding him back from wreaking total havoc. The idea of loving someone so much that you can’t stand to be away from them even if that means sacrificing everything is both beautiful and tragic.

Of course, when you love someone, you’d do anything for them... like teaming up and becoming Varus but also not Varus. When we say Varus is an awesome character here, we really mean Val and Kai.

They have control over Varus and can hold him back because they were taken over together. They love each other, they are a team. If it had been just one of them, that host would have been powerless to stop Varus.

In Overwatch, Tracer is one of the first LGBTQ characters confirmed. The reveal was a big deal given her popularity, and the fact that she’s on the cover of the game. When you think of Overwatch, you often think of Tracer.

While sexuality doesn’t play a huge role in Overwatch itself, the game has some deep lore behind it and its playable characters. When it comes to Tracer, Overwatch writer Michael Chu confirmed on Twitter that yes, she identifies as a lesbian.

This element of Tracer’s backstory was first seen in one of the companion comics released for the game. In it, we’re introduced to Tracer’s girlfriend, Emily. The comic is short and sweet, showing them celebrating the holidays together, sharing gifts, and also sharing a kiss.

Following the news that Tracer is a lesbian, another LGBTQ character was confirmed, Soldier 76. Again, it doesn’t matter who these characters love when it comes to combat in Overwatch, but having that representation in the game in general is wonderful.

Similar to Overwatch, Apex Legends has detailed lore for each of its champions and has confirmed various aspects about them, including the fact that both Bloodhound and Gibraltar are LGBTQ. Starting with Bloodhound, they identify as non-binary as confirmed by Respawn writer Manny Hagopian on Twitter.

“Since day 1, Bloodhound has been referred to by the pronouns: they/them/their. This is who they are. This is how they identify. It’s okay to struggle with that concept as we grow and evolve,” Hagopian explained.

Meanwhile, Gibraltar has been confirmed to be gay. The character description for Gibraltar includes a piece about how Gibraltar and his boyfriend once stole his father’s motorcycle.

We don’t know much beyond what’s been addressed by Respawn and offered up in lore, but we do know that we love playing both Bloodhound and Gibraltar. Among the original cast of characters in Apex Legends, both offer unique skills for players looking to do more than shoot guns.

Bloodhound has expert tracking abilities, while Gibraltar has some amazing defense options. As a whole, they make Apex Legends a strong game full of diverse characters.

You don’t have to pay attention to the lore to play Apex Legends, but it’s genuinely nice to know there’s LGBTQ representation in the game.

We’re including both Alexios and Kassandra here because you’re able to play as one or the other in Assassin’s Creed Odyssey. It doesn’t matter which one you play as, both have strong LGBTQ romance options available to them.

The fact that these relationships are optional is wonderful as it makes the game more inclusive. If you’re heterosexual, you can stick to heterosexual relationships. If you identify as a woman and are only attracted to other women, you can pursue relationships with women while playing as Kassandra.

Likewise, if you’re a trans man who’s attracted to both men and women, you can play as Alexios and date whoever you like. You get the point, there are a lot of options in Assassin’s Creed Odyssey and we appreciate them all.

As characters themselves, Alexios and Kassandra are powerful misthios who stand up for what they believe in, can fight physically, but can also get what they need through research and deduction.

It’s fun and exciting to play as one of these characters in the game, as it is in other Assassin’s Creed games. That said, what sets these two apart (and Assassin’s Creed Odyssey as a whole) is the emphasis on choice and expanded ways to interact with other characters.

We really hope to see more of this in the next installment in the series, Assassin’s Creed Valhalla.

Obviously there are way more LGBTQ characters than the ones we’ve listed above. Heck, if you go through BioWare’s games as a whole you’ll find a lengthy list. We simply wanted to highlight ones who’ve had an impact on us based on personal experience.

For the ones we’ve missed, we’d love it if you commented below on your favorite LGBTQ character and why they’re your favorite. We love you all, have a very happy Pride Month!