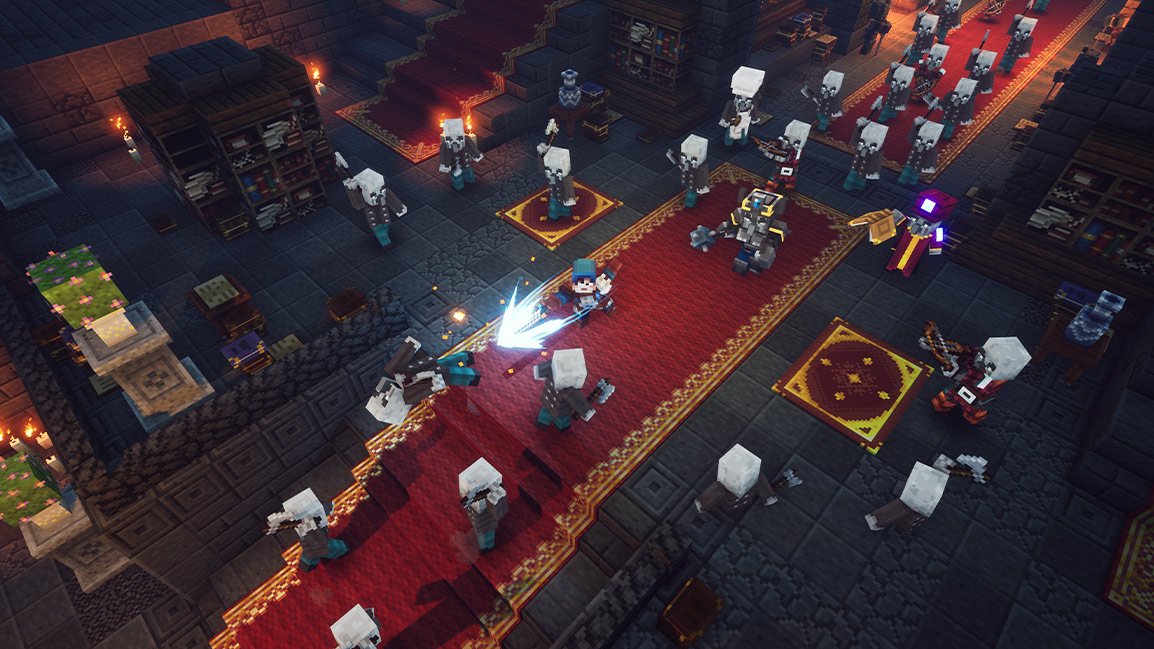 Minecraft Dungeons, the new Diablo-like dungeon crawler from Swedish studio Mojang, is out today giving us a chance to leave our crafting benches behind for an all-out brawl of an adventure.

With the game immediately joining Microsoft's unreasonably generous Game Pass offering on PC and Xbox One, millions of Minecraft fans get to play a new spin on the world they've grown up with (practically) for free. And with many reviews claiming the game to be a terrific take on the co-operative lootcrawl genre, it seems there's plenty of reasons to give it a chance.

But what exactly goes into turning one of the most widely recognized building sandboxes into something more fighty? We talked to Mojang's executive producer on Dungeons, David Nisshagen, to find out how to dig new games out from Minecraft's already enormous world, and how to stay faithful to a game that millions already cherish.

"Minecraft in its freeform glory, where we leave all the choices up to the player, it can become a bit overwhelming at times," Nisshagen tells us candidly about the game that practically changed the entire landscape of gaming. Minecraft, for all its 120 million monthly players at last official count, can suffer somewhat from the enormity of its potential. While some players are building scale replicas of Minas Tirith, others are constructing working calculators and even GameBoys with Pokemon games running on them. But the rest of us tended to explore the landscape, dig massive holes and, if we were lucky, stumble upon one of the game's subterranean secrets: dungeons.

Dungeons in Minecraft are sometimes difficult to find and their layouts often a little confusing or broken, depending on how the game's heroic procedural generation algorithm handled itself on the day. When looking for a rich seam to mine for new game ideas the team naturally settled on these areas. Looking to replicate the same excitement of making your way through these infrequent challenges without all the extra baggage of having to find them first, or tend to your other daily duties in the sandbox game.

"One other thing that we wanted to do was to give the player a bit of direction, a bit of guidance," Nisshagen says. "When you find dungeons in Minecraft, it’s a bit by chance, and it’s a bit by exploration. Here, you go through them on purpose, and there’s certainly a lot of exploration left to do. We do suggest and guide the player to the next objective that they’re supposed to do, but you can run off in these procedurally generated levels and explore. And we encourage that, because it wouldn’t be Minecraft if we didn’t."

After deciding what was so interesting about the dungeons themselves, the team set to work honing in on what type of game they should make to emphasize that. In looking for a direction to take the Minecraft experience for a new, standalone title, Nisshagen and the development team at Mojang focused in on a few key parts of that wide-ranging experience.

"The focus areas that we chose to go for were pillars of the Minecraft franchise, so adventure and exploration – those two were the things that were chosen to double down on. And also combat," Nisshagen adds quickly. "And out of that came, the [dungeon crawler] genre in combination with a passion for the genre from the dev team, and from Jens [Bergensten], the chief creative officer of Mojang. So all of that sort of guided it together to become a co-operative dungeon crawler-style game but with quite a few differences, of course."

Among those differences are a total lack of class. That's not to say the game is crude, or wears white after Labor Day, but that the system of choosing from a group of character archetypes at the start of the game doesn't exist. Without it, you are suddenly not limited to only certain types of armor, or abilities, or playstyles.

"It’s literally you are what you wear," Nisshagen says. "Everything you pick up, you can equip and you sort of create your own class, so if you think: ‘Ok I want to play a tank!’ Then ok, find a heavy armor and equip it, you’re a tank now. Think: ‘Oh this is boring, I want to be a thief!’ Then ok find an armor that looks like a thief and some daggers perhaps?"

Class abilities and spells are now an open free-for-all as well, with anyone being able to equip anything they find. They still follow the same formula (cooldowns, costs, etc) as many other dungeon crawlers, with Diablo, Torchlight and Gauntlet called out as specific influences. But without the restrictions on players. "If it’s boring you unequip it," Nisshagen says. "If you want to have three fishing rods then you just go right ahead. We leave all that up to the player to choose rather than defining it."

Nisshagen and the rest of the team at Mojang aren't shy about their influences. Bergensten's love of the Diablo series was clearly a huge factor, with the game even paying homage to its roots with a secret cow level, an in-joke from Blizzard's series. As with other crawlers, loot is randomized with armor and weapons featuring generated enchantments adding the excitement of doing multiple runs and extending the game's longevity as you chase god drops.

However progression in Minecraft Dungeons is a marked diversion from others like Diablo, where XP earned through defeating enemies and completing quests is usually pumped into a few core stats. In Dungeons, XP earns you enchantments points, which can be spent on your armor, weapons or abilities to unlock even more powerful enchantments. If you get bored of a loadout, you can salvage all of those enchantment points and pump them into another piece of gear instead.

Of course, all of those enemies you're defeating for sweet loot and XP are immediately recognizable to Minecraft fans. Part of the appeal of creating this crawler genre was in the almost universal language the game now holds in players' minds.

"There’s Minecraft being such a wonderfully strong franchise; so many people know and understand what a Creeper is when they see it," Nisshagen says. "So you don’t have to spend time explaining: 'This is a mob that runs to you and explodes'. As soon as people see it starts flashing, they understand. So we use as much as we possibly can of this instinctive knowledge that Minecraft players have and tweak that a little bit to make it fit the genre."

A lot that tweaking may be hard to comprehend when you start playing Dungeons, given that so many of the enemies look and move exactly like their original counterparts. However there are a few cases in which more tricky modifications have been made, including the dreaded Enderman.

"That sort of highlights one of the differences in Minecraft being a first-person game and Dungeons being a top-down game," Nisshagen says. "So how do you do a behavior that’s relating to whether you’re in the first-person looking at something or not. Plus the enderman behavior, how do you translate that to a top-down environment? And those are the sort of interesting design challenges that we’ve been working with, and we’re quite happy. People seem to understand it instinctively, even though we have changed the behavior to some extent. You instinctively understand what’s going on and what to expect. There are no unintended surprises, which is good, that’s what we want to do: an approachable, accessible, fun game."

These sorts of design challenges have been solved in other ways as well, for instance when the team realizes they need a specific type of mob to provoke players to use a different tactic, or exploit a gameplay mechanic. Occasionally Minecraft doesn't have all the answers, and they needed to get creative.

"In the desert temple we have a new mob called the Necromancer, he flies around and spawns zombies," Nisshagen explains. "Because we needed something that moved and spawned enemies, and that didn’t exist in Minecraft, so that is why we created it. We have monster spawners but that’s static, so do we have anything that meets this gameplay need, if it exists in Minecraft we bring it over and adapt it. And if it doesn’t we create it, and we make it in such a way that it would be possible to bring it back to Minecraft, from a contextual perspective. It’s not by any means certain that it will, but it could, and that’s up to the Minecraft team to see."

The Necromancer currently only exists in Minecraft through the use of mods, including the popular Better Dungeons mod. It wouldn't be out of the question to see creatures making the official jump back across the idea exchange into the main game. But if we do see the Necromancer popping up in a future Minecraft update, it wouldn't be the first time developers on the company's flagship sandbox have peered over the cubicle walls of their Dungeons developer neighbors and liked what they saw.

In 2016, Minecraft's developers introduced an enemy faction of the game's peaceful Villager NPCs: the Illagers. The first of these, the Vindicator, arrived in the Exploration Update, Java Edition 1.11, but according to Nisshagen their lives started outside of the main game's development tunnel.

"We have the faction that is called the Illagers, that came from Dungeons," Nisshagen says. "We needed to create a humanoid enemy type and you can’t use Villagers because they’re friendly, so we needed something new that you could fight. And you can give it a couple of different properties – they needed to be fast and scary, they needed to have some sort of ranged attack – so we created a couple of those and those were brought over into Minecraft and is already out and released. That sort of thing is kind of cool and that can only happen if you sit and work with the brand together. Different products in the same building, in the same franchise."

Straddling the line between finding a new experience in a game that is already so stuffed to bursting with ideas and features, and staying faithful and recognizable to fans, is a difficult tightrope. But given our time with Minecraft Dungeons, and the considerate work from developers including Nisshagen, it appears to be a stunt that's paid off.

You can get Minecraft Dungeons from today on Xbox One, Windows PC, PS4 and Nintendo Switch. It is also available at launch on Xbox Game Pass for console and PC.