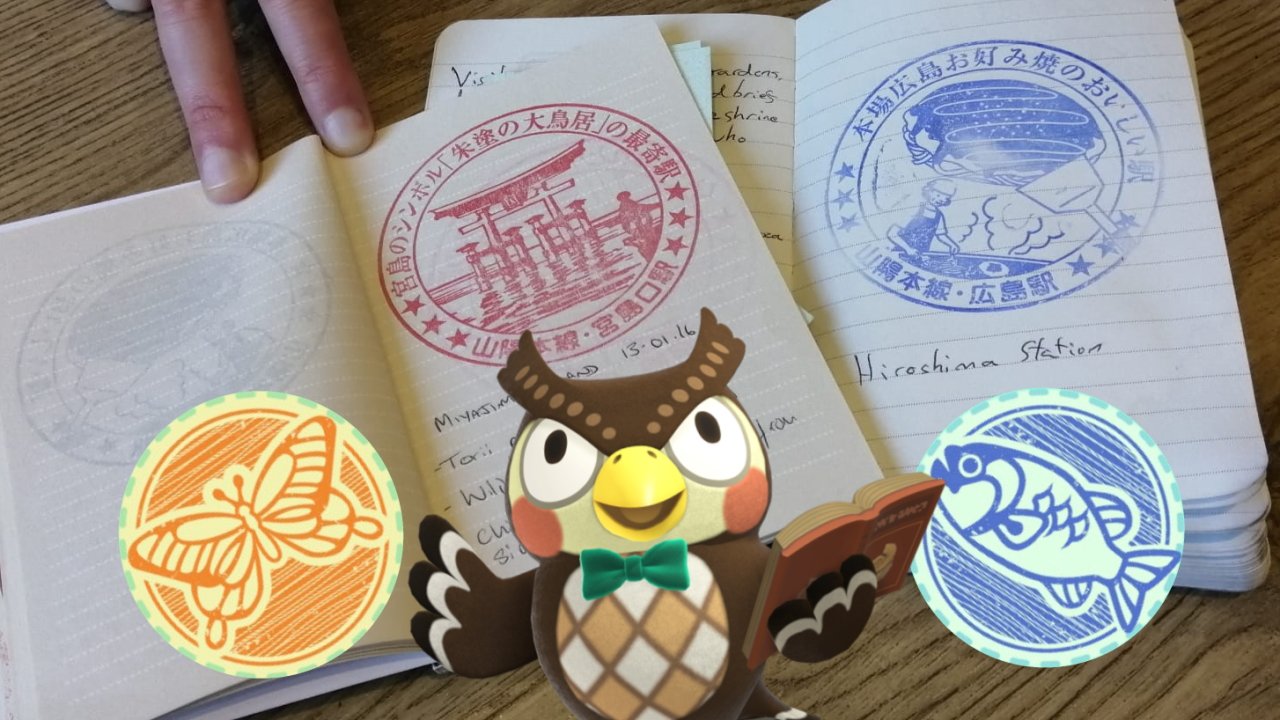 Eight months ago I was on the other side of the world. Boy does it feel like a lot longer than that now.

Like many children raised on the video games, cartoons, and anime of the ‘90s, I’m more than a little bit enamored with Japan. The country is famous for its video games, technology, temples, and nature, but what you might not know is that they do a mean set of stamps, too. I’m not talking about the kind you stick on a letter before sending — you can forget about those posers. What Japan offers are big, inky beasts that slam down on paper with a satisfying and squelchy thump. The type that makes you think ‘ooh, now that was a stamp’.

What’s more, they’re genuinely beautiful. Train stations, parks, museums, and even castles all have their own, bespoke pieces of artwork. Drop by Hiroshima station and you can get a stamp of the city’s famous noodle okonomiyaki. Take a trip to Inari and you’ll find one featuring the bold red torii gates which adorn its mountain shrine in their hundreds. I haven’t really thought about stamps since returning, but during another long week of isolation, the International Museum Day event in Animal Crossing: New Horizons has suddenly sent me soaring through the skies of pleasant memories.

From its artistic manhole covers to the serene beauty of cherry blossom season, New Horizons includes many nods to its country of development. But it’s the humble Stamp Rally that’s sent waves of nostalgia washing over me. Blathers’ museum roundup is a simple affair, and arguably even a forgettable event on the AC calendar. But each time I see a stamp station decorating the halls of the game’s lovely museum, I can’t help but break out into a smile.

I had no clue stamps were much of a big deal before visiting Japan, but thankfully my better (and smarter) half had done some research and picked us up a couple of travel notebooks in which to collect them. After printing our first and seeing just how arresting they were, tracking down the stalls at each station and place we visited quickly became a staple of each day (as did practicing the phrase “eki no stampu wa doko desuka?”). More than just an opportunity to collect some pretty art, the memorable marks ended up paving a visual path along our travels; they were the perfect accompaniment to a holiday diary.

I’ll be honest, the actual stamps of New Horizons’ International Museum Day event are a little underwhelming. Each one is pretty, but printing the same design three times in each exhibit isn’t the most exciting of activities. Still, the designs of the stations are spot on, and it got me looking back at Animal Crossing’s other catalogue of charming ink blotches: the Nook Phone.

As the hours roll into weeks and even months of play, it becomes easier and easier to ignore the Nook Miles app on your phone. Reaching a new milestone for selling shells is a nice surprise, but one that’s quickly mashed through as you toss a few thousand more miles onto an already overflowing dragon’s hoard.

Yet, while the initial satisfaction of plonking down a mark may have dwindled, I’d argue that these latter day milestones are even more important. Check your catalogue and you’ll find a myriad stamps covering the first few days of your island life. Look beyond, and as the dates become scarcer, an entire narrative begins to unfold. Did you race to plant every variety of fruit on your land? Which evaded you the longest? If you’re anything like me, you’ll have only just realized that you entirely missed the Nook Miles reward for planting fruitless trees; honestly nature, I swear I’m not just in it for the money.

Scrolling the pages of Nook’s award catalogue is a cheery reminder of just how much joy my first ever Animal Crossing outing has provided. It tells the story of your island, and makes me wish I could have marked each event with photos as well.

As the final days of our trip last year grew busier and somewhat dominated by an impending typhoon, I grew lax in writing up the day’s events, leaving the spaces next to and under each stamp blank. With the wheels of time inexorably churning detailed memories into an ever hazier mush, it’s something I definitely regret. But piecing together the events and sights of each place with my partner as we look back through our notebooks and photos offers its own unique pleasure as well.

The island holiday of Animal Crossing: New Horizons, with it’s time-stamped camera shots and milestones, understands that feeling. Goofing around on a friend’s island can’t quite match laughing and chatting with locals in a cramped Shibuya bar, but the connection between the two has been an unexpected delight from my time with the game. In reality, it was never really about the stamps themselves. They’re gorgeous, certainly, but more than anything they serve as a reminder of some of the best times and trips I’ve ever been on.