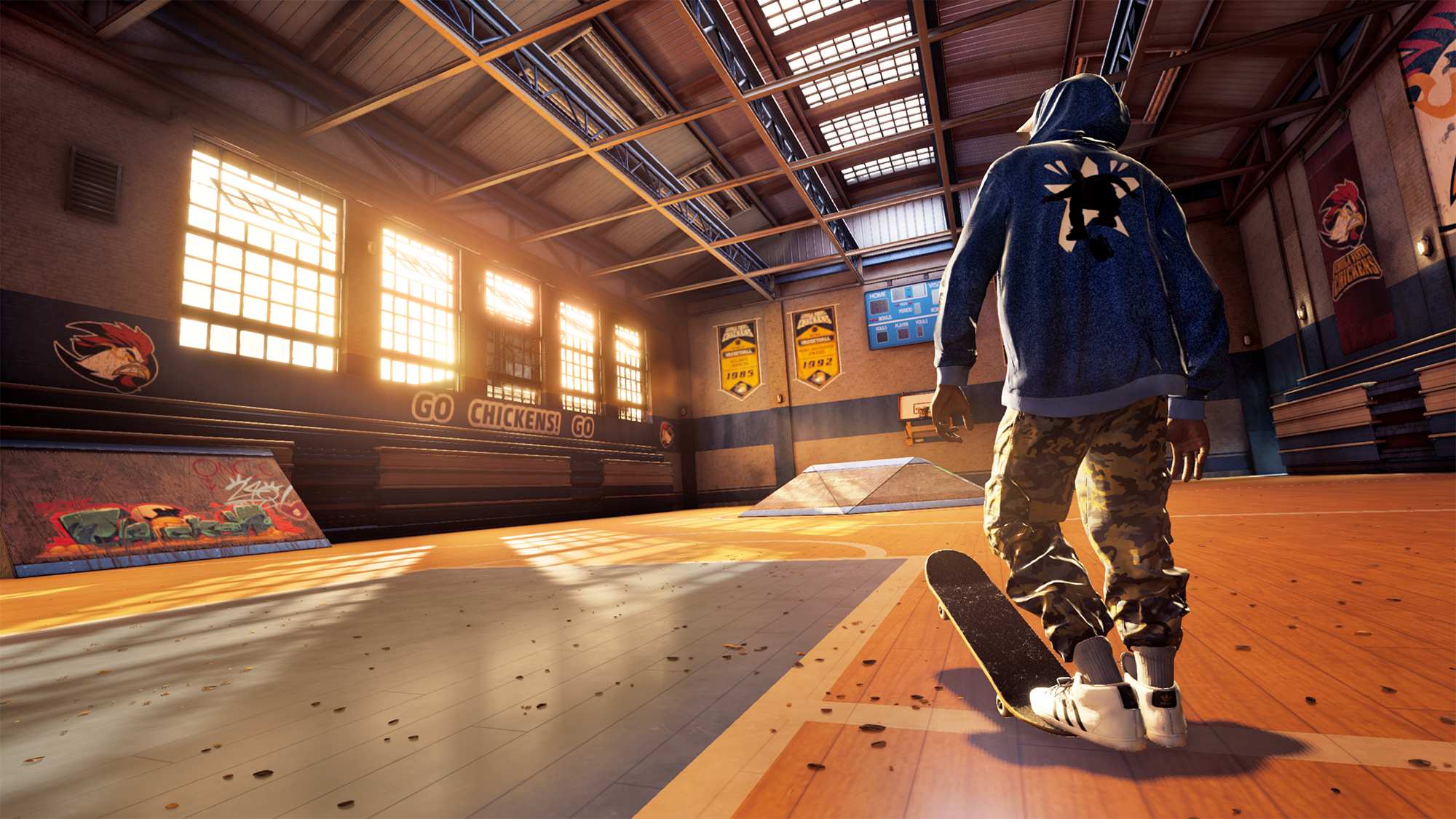 Revisiting the soundtracks of Tony Hawk's Pro Skater 1 and 2

When the Tony Hawk’s Pro Skater 1 + 2 remasters were announced, we were immediately transported back to the first time we ever skated the Warehouse level to the tune of Superman by Goldfinger. It’s a moment in gaming for us that’s impossible to forget.

The song reminds us of a happier time when we were young and free from the stress of adulthood. Watching what Tony Hawk could do on his skateboard in the game and out of it inspired us to give skateboarding a try.

Unfortunately, given the fact we’re inside writing this feature and not out practicing for the X Games means we never quite fulfilled our dream of becoming a professional skateboarder like Tony Hawk.

Crushed aspirations aside, the THPS games remain high on the list of games that made an impression on us when we were young and we’re indescribably happy to be able to play the first two again, fully remastered.

Even better, it was confirmed that the Tony Hawk’s Pro Skater 1 + 2 remasters will include most of the songs featured on the original soundtracks.

Due to licensing issues, it’s not exactly surprising to hear they may be unable to lock down all of the songs for the 2020 remasters. Most of the songs you associate with the THPS games like Police Truck by Dead Kennedys or When Worlds Collide by Powerman 5000 are sure to be included though.

So, if you want to stretch your legs and take a walk down memory lane, or you missed out on the original games and want to find out what all the soundtrack hype is about, we thought it’d be fun to revisit the soundtracks that helped define Tony Hawk’s Pro Skater 1 + 2!

They weren’t alone, as Tony Hawk’s Pro Skater became one of the highest-selling console games at the time.

Not only was it available on PlayStation, you could also purchase a copy for Nintendo 64, Sega Dreamcast, N-Gage, and Game Boy Color. What’s interesting about the Game Boy Color version is that it had its own exclusive level, Harbor.

Unfortunately, Harbor didn’t quite make up for the fact that it lacked many of the levels available on other platforms including Warehouse, School, Mall, and Roswell.

If you owned a copy of the game for a platform like PlayStation, you had full access to the following levels:

You also had the ability to choose between 12 famous skateboarders:

Sitting here in the year 2020, nearly 21 years have passed since the release of the first game, and it can be hard to remember all of its classic songs. To help jog your memory, we’ve listed the full tracklist for Tony Hawk’s Pro Skater below.

Before you start the actual game, you’re greeted by some funky main menu music by Brian Bright.

Following the cool vibe of the main menu track, the first ‘real’ song you hear as you roll into the Warehouse in Tony Hawk’s Pro Skater is Superman by Goldfinger.

For many THPS fans, Superman by Goldfinger remains at the top of their list as one of best THPS songs.

As an added bonus, Goldfinger recently uploaded a special performance of Superman from home and the 'Quarantine Video' as it's labeled is worth watching if you're a fan of the band, or the song, or both.

Ah, and who could forget Committed by Unsane? The name may escape you, but once you hear the song, you'll be instantly transported back to weekends spent sitting in front of your TV playing Tony Hawk's Pro Skater.

We feel it’s supremely important to spotlight Jerry was a Racecar Driver by Primus and Police Truck by Dead Kennedys as they both have a distinct Tony Hawk's Pro Skater attitude to them that we absolutely love.

Many young gamers cultivated a love of punk rock thanks to the inclusion of songs like Police Truck by Dead Kennedys and we can’t say we blame them. It’s so good, you just want to play it over and over again.

Other songs stand out as earworms with lyrics that re peat in your head. You might not know the whole song, but you sure as hell remember the chorus of Cyco Vision by Suicidal Tendencies.

The rampant success of Tony Hawk’s Pro Skater created demand for a sequel. Neversoft was quick to satiate new fans with Tony Hawk’s Pro Skater 2 on September 19, 2000. The game remains one of the best examples of a sequel done right, expanding upon the first game while retaining what made the original so popular.

Tony Hawk’s Pro Skater 2 earned even better reviews than its predecessor and remains one of the highest reviewed PlayStation games with a whopping 98/100 on Metacritic. It also landed in the Top 5 of many “Best Video Games of 2000” lists.

The positive reception was well-deserved, though again, the game had some minor differences depending on the platform you bought it for.

Tony Hawk’s Pro Skater 2 was available on PlayStation, Nintendo 64, Game Boy Color, as well as Xbox and ports to Dreamcast and Microsoft Windows. The game was successful, and as a result, it was absolutely everywhere.

Like the first game, different platforms had their own exclusive levels and again, many levels were excluded for Game Boy Advance. Below, we’ve listed all of the levels offered in Tony Hawk’s Pro Skater 2.

In Tony Hawk’s Pro Skater 2, you were given the opportunity to pick from a larger roster of skateboarders with more ‘secret’ characters like Spider-Man. Yes, you could skate around as Spider-Man.

The soundtrack for Tony Hawk’s Pro Skater 2 was more varied, with less emphasis on punk rock and the inclusion of more ‘recognizable’ bands as it became easier to license bands following the overwhelming success of the first game.

Below, we’ve listed all of the songs included in the soundtrack for Tony Hawk’s Pro Skater 2.

Of the two games, we personally feel Tony Hawk’s Pro Skater 2 had the better soundtrack. One song that we need to mention first here is When Worlds Collide by Powerman 5000.

For us, it’s one of those songs that has come to define industrial nu-metal from the early 2000s.

Fun fact, did you know that Powerman 5000 singer Michael ‘Spider One’ Cummings is the younger brother of Rob Zombie? Thanksgiving dinners back then must have been interesting given each of their distinct sense of fashion.

Obviously we have to mention Bring The Noise by Anthrax & Public Enemy which can only be played at maximum volume. We felt like absolute badasses skating around to the lyrics, “Turn it up! Bring the noise!”

If you weren’t already a fan of Rage Against the Machine, Tony Hawk’s Pro Skater 2 included a fantastic introduction to the group with the inclusion of the song Guerrilla Radio.

Other songs that continue to hold up that we can’t wait to hear in the remaster include Pin the Tail on the Donkey from Naughty by Nature and, of course, B-Boy Document ‘99.

Adding to how insanely varied the Tony Hawk's Pro Skater 2 soundtrack was, you were able to go from bops like B-Boy Document '99 to absolute ragers like Evil Eye from Fu Manchu.

Sitting here listening to all of these songs over again makes us want the remastered games even more. Yes, we can go back and play the originals and we absolutely intend to do that, but we also want to see if the updated visuals bring new life to the experience.

Listening to them on their own is one thing, having them in the background while you’re skateboarding as Tony Hawk is another. During a year with so much chaos and worrying news, it’s nice to know that we’ll be able to revisit one of the happiest time periods in our life… our childhood.

A childhood where we spent hours upon hours consumed not only by Tony Hawk’s Pro Skater, but by the songs that came to define it.

A remaster of Tony Hawk’s Pro Skater 3 hasn’t been announced, only the first two games are getting remasters right now, but we can’t help but want to leave you with our favorite song off THPS 3's soundtrack, Motorhead’s… THE ACE OF SPADES!

We rocked out to that and Blitzkrieg Bop by The Ramones like crazy back in 2001.

After revisiting the soundtracks for Tony Hawk’s Pro Skater 1 + 2, we’re curious what your favorite songs are. We also want to know which of the two soundtracks you think is better.

Are you all for the original game and tracks like Superman by Goldfinger and Police Truck by Dead Kennedys, or do you lean towards the sequel’s soundtrack and its inclusion of Anthrax, Rage Against the Machine, and tracks like B-Boy Document ‘99? Let us know in the comments below!