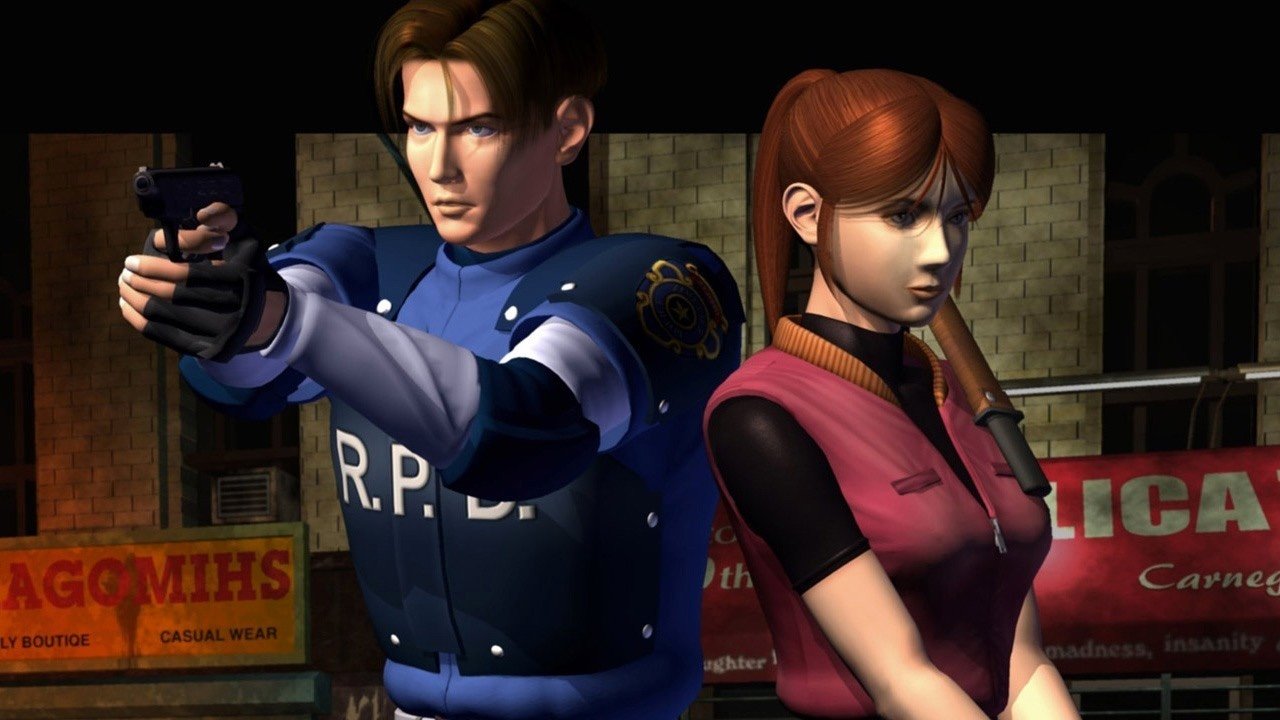 1998 was an electrifying year for video games, which saw Half Life, Grim Fandango, Baldur’s Gate, Metal Gear Solid, StarCraft, Banjo-Kazooie and The Legend of Zelda: Ocarina of Time up for grabs. But it was Capcom’s Resident Evil 2 for PlayStation that raised expectations for the months ahead. Not only was the sequel ambitious, it was also perfect in its execution.

This was as close to George Romero’s Night of the Living Dead as gamers could possibly get in 1998. Resident Evil fans who had enjoyed imagining what it would be like to witness Raccoon City as a full-blown zombie apocalypse found themselves at the thrilling epicenter. While the first game took place in a claustrophobic mansion overrun by B-movie monsters, the next installment addressed human tragedy more directly, and on an epic outdoor scale.

The game opens with a dramatic CG movie sequence, depicting Raccoon City Police rookie Leon S. Kennedy in a chance encounter with self-styled vigilante Claire Redfield. During the introduction, Kennedy saves Redfield with a single bullet to the head of a zombie looming silently behind her. They are separated when their patrol car crashes, a zombie hiding in the back seat, shortly before a tanker truck driven by yet another zombie rams right into them.

From an early narrative point of view, the choice of Kennedy and Redfield as inexperienced combatants is simple but effective. They express fear and uncertainty, as opposed to boldly taking charge. Their bravery combines with the player’s ingenuity for a strong foundation, and Raccoon City provides a convincing cast-off point for the immersive journey to follow.

In the original PlayStation edition, two CDs contained scenarios for Kennedy and Redfield, for an initial playthrough dubbed Scenario A. The game rewards four attempts to engage with the story from every angle, via its innovative Zapping System. Upon reaching the end of Scenario A, Scenario B exposes what the other character was up to while taking charge of your first-choice character. Fans swear by the full-blown experience of playing as both Kennedy A then Redfield B plus Redfield A then Kennedy B for the best of everything. In case you’re wondering, Redfield A then Kennedy B is considered canon.

Resident Evil 2 ups the pace from its 1996 forerunner, increasing the zombie count at the same time providing a more impressive arsenal with which to mow down those infected. There’s a grenade launcher, an SMG and powerful shotgun to aid survival, plus a bow-gun reserved solely for Redfield.

Capcom didn’t introduce running zombies until Resident Evil 3: Nemesis, so the pressure in Resident Evil 2 comes from the volume of enemies and the danger of being surrounded. Also, Capcom unleashes new enemy types that make the jump-scares from the first installment seem tame: Lickers cling to the walls and ceiling, long tongues lashing out along corridors; a Tyrant known as Mr. X stalks the team; and a colossal alligator encounter calls upon smart use of the environment to bring matters to a close.

Although this may all have been received just as well if it had been an extended creature feature, the genius really lies in the human drama this time around. Kennedy and Redfield are likeable to begin with, but it’s the characters they run into while trying to escape the city that bring so much more emotional depth than almost any game had achieved before 1998.

Umbrella Corporation scientist William Birkin embellishes the action while enriching the plot with his self-inflicted mutation, becoming more grotesque with each sighting. That William is father to a scared little girl called Sherry, whom Redfield takes under her wing, adds to the pathos of the subtext. The T-Virus no longer claims anonymous victims, they have families.

Capcom raising its own bar

As with the first game in the series, Resident Evil 2 grades playthrough performance, but the Zapping System adds further strategical depth – such as the Raccoon City locker room that offers the choice of a weapon to take with one character, or leave for the other.

Capcom’s designers would have expected and planned for extraordinary levels of scrutiny, which the top-tier production values impressively withstand. Sure, the technology falls short of today’s standard, but although Resident Evil 2 is celebrating its 20th anniversary this year, all the creepy animation, visual effects and sound effects continue to be hair-raising.

Resident Evil 2 is a haunting experience that also benefits from its atmospheric soundtrack, which makes it even more movie-like. It’s clear from every possible angle that Capcom had invested so much more creative thought into the presentation overall. Arriving during the era long before online co-op and expansion packs became the norm, what Capcom set out to achieve is a title finessed to a ridiculous degree that could be revisited numerous times.

Owing to its multifaceted structure, Resident Evil 2 lacks the epic feel of later titles, among which Resident Evil: Code Veronica immediately springs to mind. Possibly today’s audience would feel short-changed if the challenge of a second, third and fourth playthrough does not appeal. The lock and key, fetch-quests do feel dated, however, and there’s no denying that the control scheme is clunky. Resident Evil 2 still behaves like a video game escaping its shackles to take on Hollywood, held back by lack of experience gained with each iteration.

With a remake on the way, announced in 2015 but with little more to go on since that time, you would do well to seek the original for the experience in its original form. Far from being a tired museum piece, as an expertly crafted example of late 20th century survival horror, Resident Evil 2 has a lot to offer genre connoisseurs.