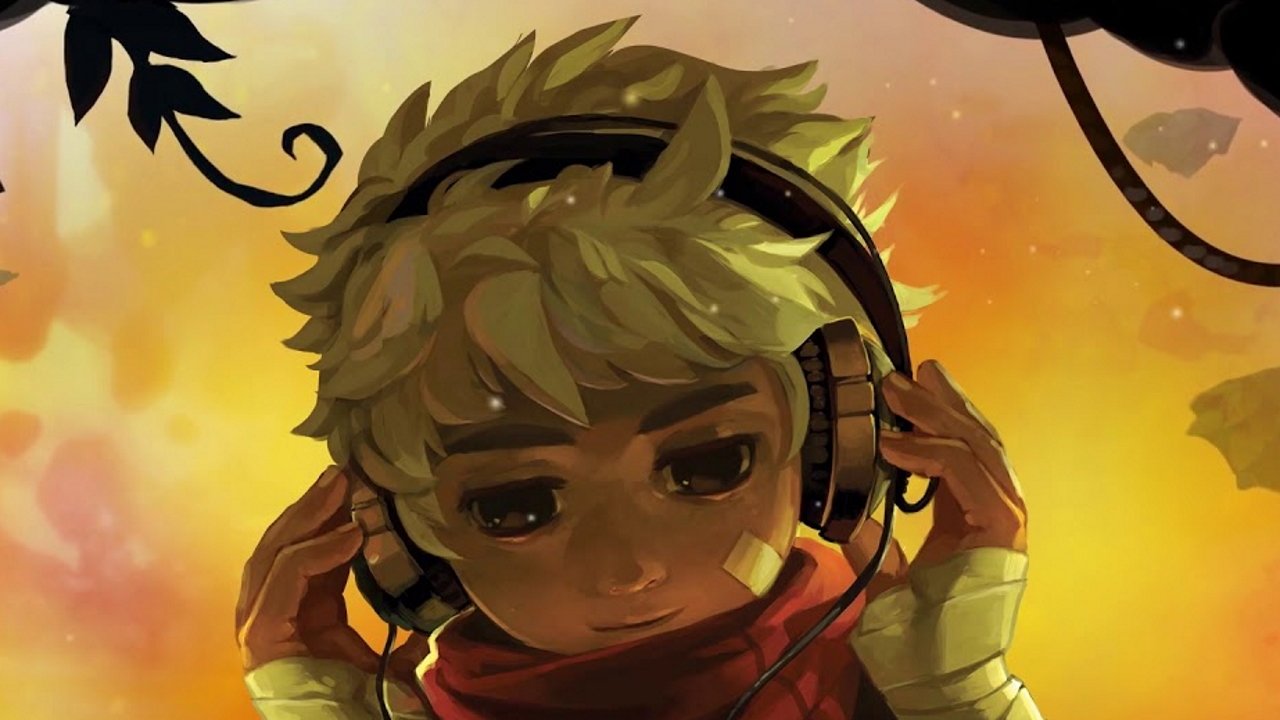 Darren Korb is no stranger to giving it his all in front of a crowd. The Supergiant Games composer usually prefers to work from the comfort and quiet of his home, but back in 2010 he took part in the Total Rock North American Rock Band 2 championship. Donning costumes and performing live in front of judges, a crowd, and the Harmonix developers, Korb and his band gave it their all.

“We did Walk Like An Egyptian for the qualifier round and had a whole choreographed thing,” Korb said. “We painted ourselves gold and I shaved an ankh into our chest hair and one of us was dressed as a mummy… In the final round we did Heartbreaker by Pat Benetar. So we had white polo shirts with little red short shorts, high socks and converses, the whole shebang. Like ‘80s athletic wear but sparkly. Two of the people in the band were Rocky Horror people and one of them did cosplay. It was super fun.”

A pretty hardcore effort for a Rock Band competition, you might think, but the commitment was worth it as Korb’s band, Rofl Mao, came out on top, winning the entire event. And yes, there is video evidence.

“It was incredible,” said Korb. “We got one of those giant novelty checks and we got to meet Ringo Starr. I had a trophy that’s a framed Rock Band Guitar in a case. That was also the last time that competition happened. So I’m reigning champion forever! Unless they decide to do it again.”

The following year, Supergiant Games would go on to release Bastion, receiving overwhelming critical praise, plenty of which was reserved for Korb’s work alongside friend and singer Ashley Barrett. Since then, Korb has worked with Supergiant to compose and produce the soundtracks to Transistor, Pyre, and Hades. His music has earned him an outstanding reputation among composers and gamers.

Together, Korb and Barrett have performed several times in small-scale acoustic performances, covering fan favorite tracks from each game. But last year Supergiant Games kicked things up a serious notch, hosting their first ever, full orchestral concert at PAX West 2019.

Video game concerts are nothing new, but few indie studios can claim to have orchestral performances under their belt. Even the idea of it seemed impossible to Korb at the time, but thankfully he had a friend or two on hand to help.

“We really wanted to do something special to celebrate our 10th anniversary that happened at PAX West in August,” Korb explained. “Someone on our team suggested ‘What about an orchestral show?’ and I thought that doesn’t… We can’t pull that off! But just in case, let me talk to my friend Austin Wintory.“

“So I spoke to Austin and he’s like ‘Yeah, man. First of all, I’m in and I’m going to conduct it. Second of all, you can do it and I’ll help you get the guy to do the arrangements.’ He was really instrumental in getting the whole thing to happen.“

In gaming circles, Wintory is most famous for composing the soundtrack to the 2012 indie release Journey, widely heralded as an all-time great in both design and soundtrack. With such an experienced hand involved, things quickly began to shape up for Supergiant’s debut show.

“As I talked to him about it I started to get pretty excited because I thought, this is so different to my normal process,” Said Korb. “All my stuff I do alone in my studio then I have Ashley come in and sing. Everything else is just me playing, I never have to think of things for other musicians.

“But with Austin’s assistance, we were able to put the whole thing together. We started thinking about doing our independent thing but it fell through, then pretty late breaking, PAX said yeah, we’ve got a spot for you with a main stage, so we were like okay, it’s back on. Let’s do this!”

The gusto was certainly there, but scaling tracks from the instruments in your home studio to a full orchestra is no mean feat. The secret to success? Plenty of work in a short period of time, and a healthy dash of musical theater experience.

“Ashley and I would practice once or twice a week for like two months. We were drilling and drilling and drilling just to make sure because it’s such a different thing. But you know, Ashley and I both grew up doing musical theater so interestingly enough, once we got up there with the orchestra I was like oh I know what this is! This is basically just like doing a musical because it’s very similar to that. Once that happened I was like okay, I have muscle memory for this. As strange as it seemed, it was actually similar to stuff I had done growing up, in a way.”

Thankfully, working with Barrett actually made Supergiant’s soundtracks more suitable than most for a large-scale show. There aren’t many indie games that choose to incorporate vocal tracks, and while the instruments and performers may have changed for the PAX West show, the lyrics remained a guiding path for both performers and audience.

“I think that really helps it translate to live performance,” said Korb. “It’s like a concert; you’d go see a band and usually a band has a vocalist - obviously there are instrumental bands and tracks - but I think it helps it translate because you have a throughline. Even when the piece is fully rearranged with totally different instruments, the melody is the same, the lyrics are the same.”

It’s safe to say that the PAX West performance was a huge success, and Supergiant Games would go on to perform again at PAX East 2020 in Boston less than half a year later. Yet, even after seeing fans turn up in droves to listen to the music he wrote, Korb remains blown away by the adoration of Supergiant Games fans.

“I’m perpetually shocked,” Korb said. “For real, it’s like, I’d been trying for a while before Bastion on different projects as a songwriter. I was doing whatever I could in music, and I had done stuff that I thought was cool before Bastion that no one cared about. So I was shocked when the reaction to Bastion was what it was. And I continue to be shocked just cause I’m trying new stuff every time, and I do not take it for granted that people will like the stuff that I do so it’s always really touching when people respond so positively to the music.”

And seeing the work he’d recorded and composed performed by a professional orchestra for an eager crowd? How does an indie composer describe such an experience?

“Unbelievable,” said Korb. “It’s super surreal, especially the first time. The second time I was kinda able to have more fun, I think? But the first time I was really like wow. Just hearing these pieces in this way was really pretty insane and pretty emotional for me. I never even imagined that I would be doing anything like that.”

The last decade has marked quite the journey for Korb, rising from his first ever game soundtrack to become a widely recognized figure in the industry. With such experience under his belt, are there composers Korb still look up to in the gaming world? As it happens, he’s got quite a long list.

“Austin Wintory,” Korb began. “His stuff I really admire and respect. It’s so outside of what I would be able to do. It’s such a different set of skills that he has. I really respect his approach and execution. And Lena Raine’s stuff on Celeste is really impressive to me. I thought that was really rad. Danny Baranowsky, I really like his tunes. He’s got a fun, irreverent vibe to his music that I really appreciate.

“Getting into this I always liked Plants vs Zombies, Laura Shigihara, her stuff on that. That game’s amazing and the music is so simple and effective. Growing up, even stuff like Mark Morgan’s score for Fallout 2 and 1. I love those games. Going way back, even Marble Madness for the NES, and Bionic Commando. Those are the games that when I was kid I was like 'Whoa, this is cool. This is a video game and the music sounds awesome! What’s up with that?'”

You can read more about Darren Korb’s love of Marble Madness in his entry to our Composer’s Choice series, or follow him on Twitter to keep up with all of his latest work and performances. We’d like to extend an enormous thank you to Darren Korb and the Supergiant Games team for taking the time to answer our questions.