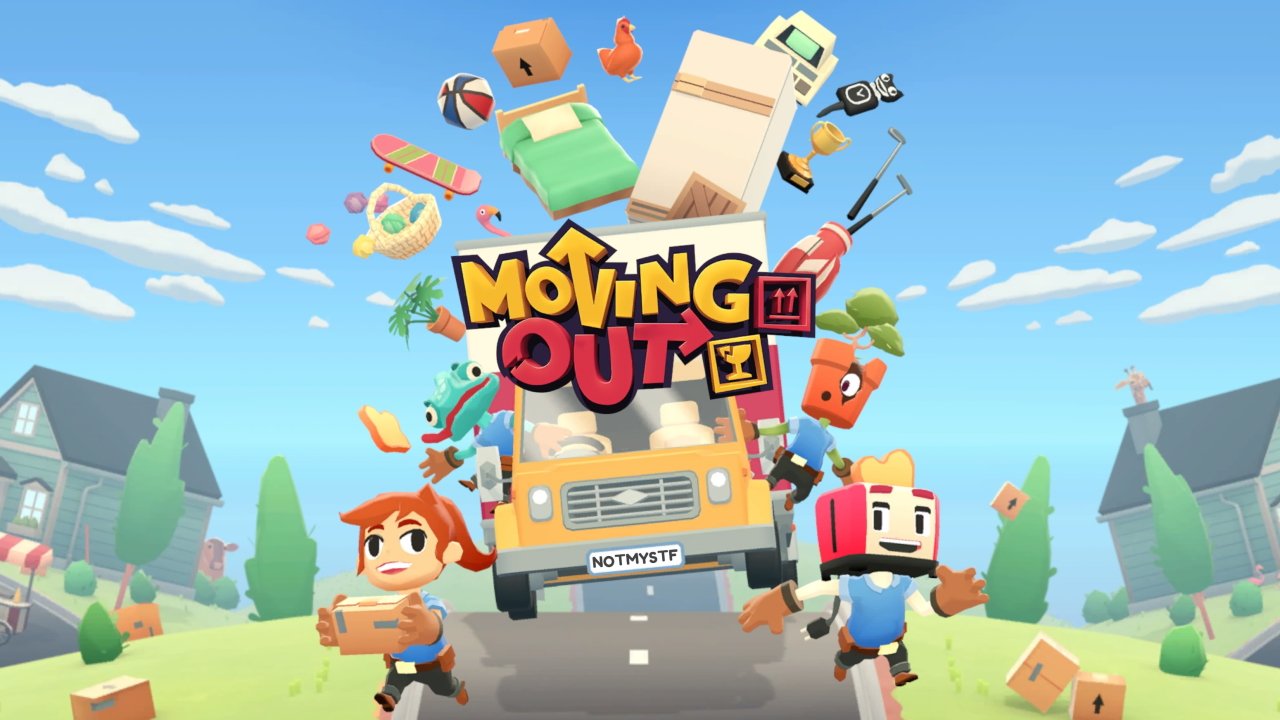 Pack it up, pack it in, let me begin. Given the sheer amount of damage — both personal and property — you’ll be causing while careering through the hectic levels of Moving Out, House of Pain’s Jump Around is a fitting accompaniment to any session. Setting up the tune on your speakers may take some effort, but you’ll find smiles are dlivered for free in this cheerful co-op affair.

As part of the Smooth Moves company, your job in Moving Out is to get the marked items out of the house/warehouse/farm/suspicious lab you’ve been sent to, and into your van as quickly as possible. If you’ve ever helped someone move house before, you’ll know that it’s usually an exhausting, delicate, and challenging task. Fortunately, here all your clients have signed waivers regarding damage to their property, so you’re free to fling TVs through windows, smash down doors, and tear refrigerators right off the wall. Who needs to unplug things, anyway? What’s important is that everything gets from A to B.

Small items like cardboard boxes and radios can be hefted easily on your own, but larger and heavier objects like tables and sofas require two players muck in together before they’ll budge. And then there are the awkwardly shaped bits; an L-Shaped sofa might be great to relax on, but you’ll curse their invention the first time you try to shift one through a doorway. A good portion of each level is spent shouting for your partner to shimmy left — no, the other left — as you wedge a bed diagonally in a hallway. Manage to pull off a big move in one smooth motion though, and you’ll struggle to resist high-fiving as the item plonks down in the back of the van.

Things start off simple in Moving out, as players zip in and out of a house chaotically, grabbing the nearest object as quickly as they can. It isn’t long, however, before the difficulty ramps up. A haunted manor sees you slapping away ghosts as you scurry to and fro, farmyards force you to box rambunctious wildlife behind other items lest they burst free of the truck, and an improbably designed flamethrower factory demands one player race back to a slap a lever every few seconds to stop all the merchandise going up in flames.

The mad scrambles of the early stages are a blast for a while, but it’s the latter stages that really bring out the best in Moving Out. Forcing players to establish roles and call out information, you’ll need to achieve at least a messy semblance of coordination if you want to see items all the way to the drop-off zone. Thankfully, you’ll quickly discover shortcuts like hurling items out of an upper-story window, or shifting that weighty dining table onto a ski slope to carry all the way down to the feet of your truck.

It's nigh-on impossible to avoid mentioning Overcooked when talking about Moving Out, but while the influences from Ghost Town Games’ excellent chef-’em-up are clear in both in tone, visuals, and structure, Moving Out does more than enough to carve its own, distinct space. While Overcooked and its sequel ask you to curtail chaos into a well-oiled food production line to rack up points, Moving Out creates a more tangible end goal.

You’re still racing against the clock, but you can mark your progress clearly in each level by the number of objects remaining, and the amount of junk already in the van. Regardless of your final time, hurling the final item into the truck delivers the satisfying sense of a job well done. Even if that job did leave the house and its surroundings looking like the recipients of an unfortunately localized earthquake.

The result is a game in which we found ourselves less concerned about securing a gold ranking on each level, instead marking our improvement in technique and co-operation over the course of several levels. That said, there’s plenty of incentive to return earlier levels. Along with timed medals, each level includes three — typically very silly — secret missions, revealed only once you’ve played through once.

You’ll complete plenty of these secrets accidentally, and the coins they earn you can be spent at the arcade house to unlock special challenge levels. These are where the serious tests of coordinated movement lie, tasking players to navigate increasingly tricky courses while carrying unwieldy objects. They’re tough and often infuriating but will have you hammering the restart button to give it just one more go.

While Moving Out lacks some of the polish and visual finesse of its clear inspiration, there’s a brilliant core game packed into this indie sofa-shifter, and it’s sandwiched tightly between charming humor, inventive levels and a wealth of opportunity for slapstick, physics-based shenanigans to occur. If you’re looking for some fast co-operative fun to dive into after finishing everything Overcooked has to offer, Moving Out should be the next stop on the road.

Note: Moving Out was reviewed on PS4, with all levels completed by two players.